This post contains my first set of portraits for my “One-hundred people who I don’t know” project which I first posted about here.

The aim of the project is to make one-hundred portraits, each subject being a person I don’t know, using the same camera and film for consistency of results (and also to allow me to see how I develop and, hopefully, improve through the course of the project).

The camera chosen is my Yashica Mat 124G TLR, and I will be using Kodak Portra 400 film.

My first outing took place last weekend and I was quite nervous about the endeavour. I’m far from an extrovert person and I was concerned as to how people might react when a stranger asked them if he could make their portrait, but the outing resulted in my asking fourteen people, eleven of whom kindly agreed, which I count as a resounding success!

Of the eleven photos, nine of them turned out successfuully enough to form part of the project. Some of these nine are not perfect – the fault of myself for missing focus or firing the shutter at the wrong time to get the picture I’d envisaged – but not so much that I won’t include them. It may be that I set myself stricter technical standards in future, but for now I’m happy with what I achieved.

The two shots that didn’t make the cut were more noticeably out of focus. Again, my fault, not the subjects. My apologies to both!

So, in chronological order, here we go…

#1 – This was the second person I asked on the day but the first to say yes. I like the backdrop of the photo as it does a good job of isolating the person in the frame. I wish I’d gotten his face-mask a little more in frame – a little detail that places the picture in time. 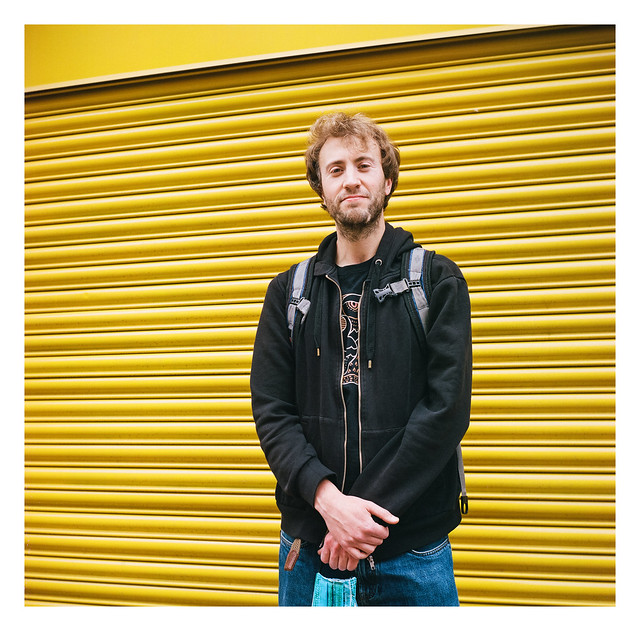 #2 – The third person I asked and the second to agree to take part. She was friendly when asked, replying “Well, you don’t know me!” when I explained my aim of photographing one-hundred strangers. She left her mask in place, which I don’t mind at all. As per my comment on the photo above, it’s a good marker of the times we’re currently going through. 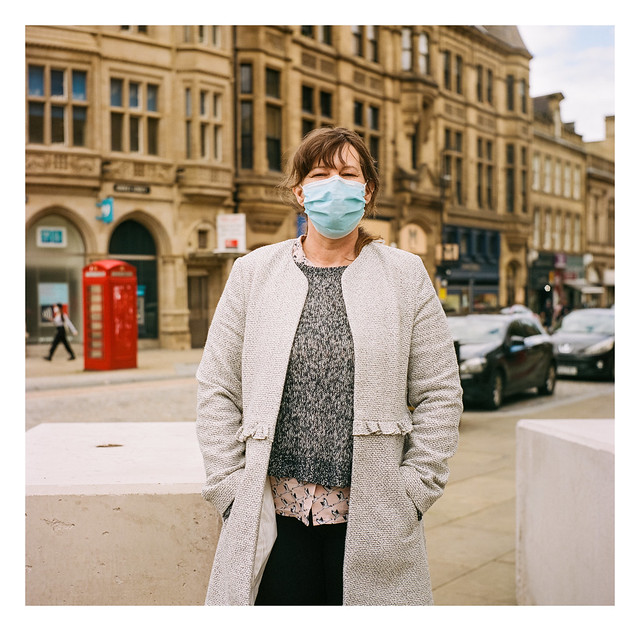 #3 – This guy was the sixth person asked, although the fifth person I’d photographed as the previous shot was one of those that didn’t quite work out. Spotting the guy’s cameras, I thought that he might be more inclined to let me photograph him, and I was right. He chatted a little about my camera as he has one the same. He also gave me his business card and I’d intended to send him a copy of his photo but I managed to lose the card somewhere. If you’re reading this, my apologies! 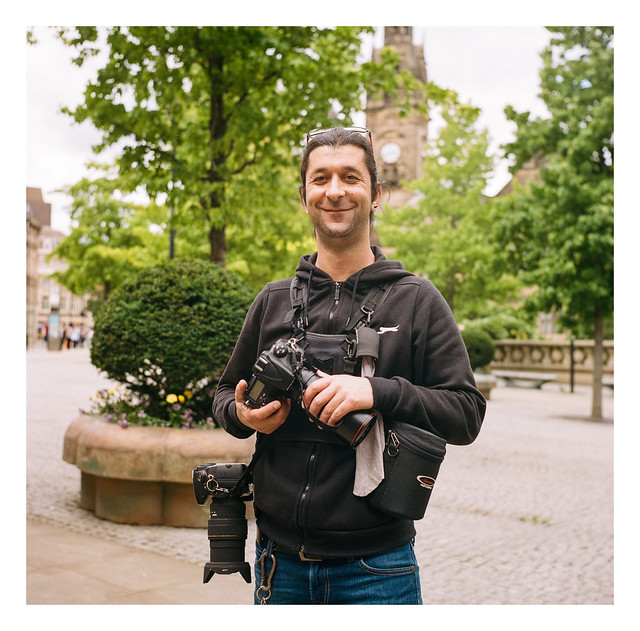 #4 – The seventh person asked (and the first in an unbroken run of six people who all agreed to participate – everyone else I asked on the day in fact). I felt a little guilty as he was listening to music on a pair of ear-buds that I didn’t notice until he removed one when I asked if I could take his picture. 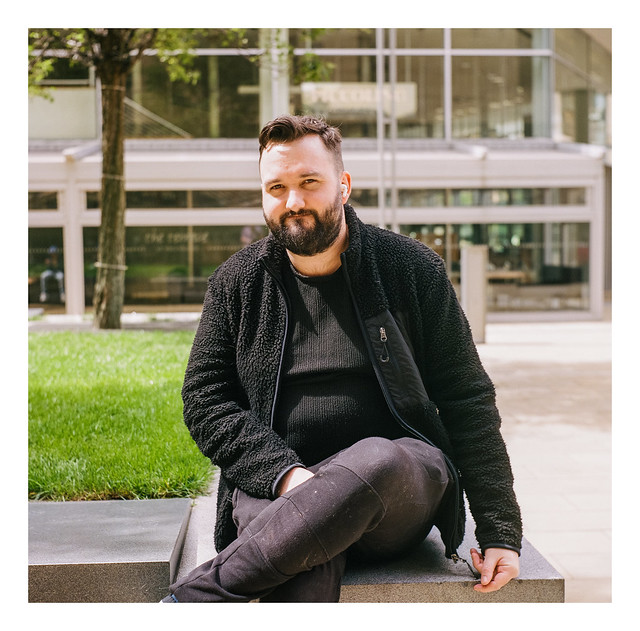 #5 – The first of two street musicians whose portraits I made. I did wonder if these should count for the project – although they were both asked if I could make a picture, and they’re both people I don’t know, the fact that they’re probably photographed by lots of people amde me wonder if this was a bit of a cheat on my part. But, hey, it’s my project so street performers are in (as long as I ask their permission to make a portrait). 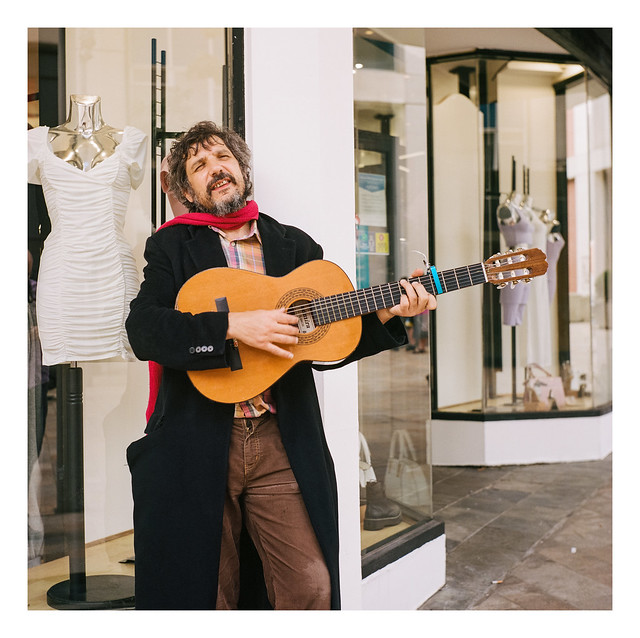 #6 – This chap was stood outside the entrance to a department store and, while I didn’t ask, I wondered if he might have been waiting for his partner to emerge. He allowed me to make the photograh, but presented me with a profile view. I like this shot a lot – it’s one of the few that show a nice fall-off in depth of field, and it also has the sharpest focus on the subject of all the images I made. I like the profile view too. 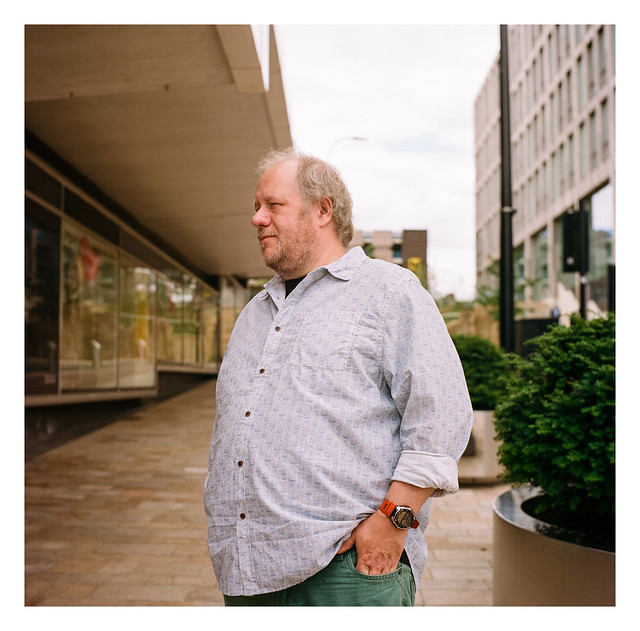 #7 – I spotted this woman carrying the potted plant and instantly thought that she would make for a nice portrait. The plant would provide an added bit of story to the photograph. I wasn’t, however, willing to ask her to stand still with the heavy-looking plant while I made the picture, and thought I would have to miss the opportunity. So I was quite pleased when she stopped to have a breather by perching the plant atop a roadside bollard as it gave me a chance to ask if she’d take part. I wish I’d made the photo when she was looking towards me, but I’m still very happy with the result. She was the only person on the day who asked if I would be publishing the photos anywhere, so I gave her the address of the blog. If you’re reading this, thank you once more. I really appreciate your letting me make the picture. 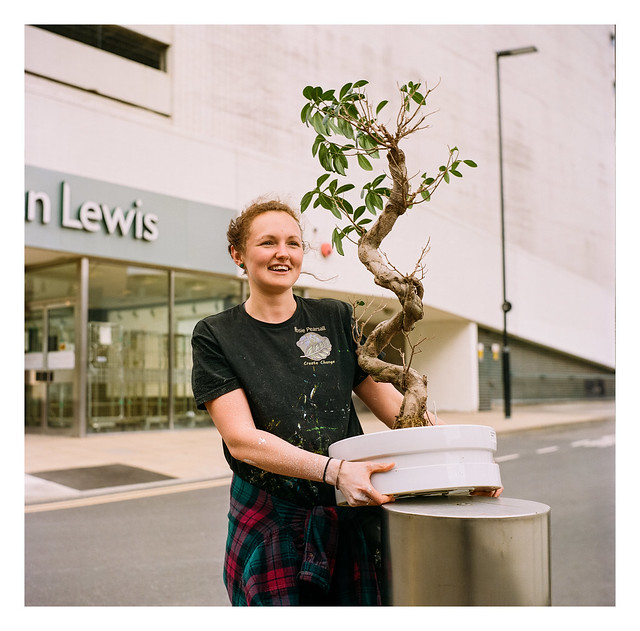 #8 – Another person who I suspect might have been waiting for his other-half to emerge from a nearby shop. I quite like the central positioning on this one. Because of social-distancing rules, it was difficult to get head-and-shoulders type shots using the Yashica Mat’s fixed 80mm lens, and I’ve ended up with a variety of different stlyes. These compositional choices are things that I hope I will become more proficient with over time. 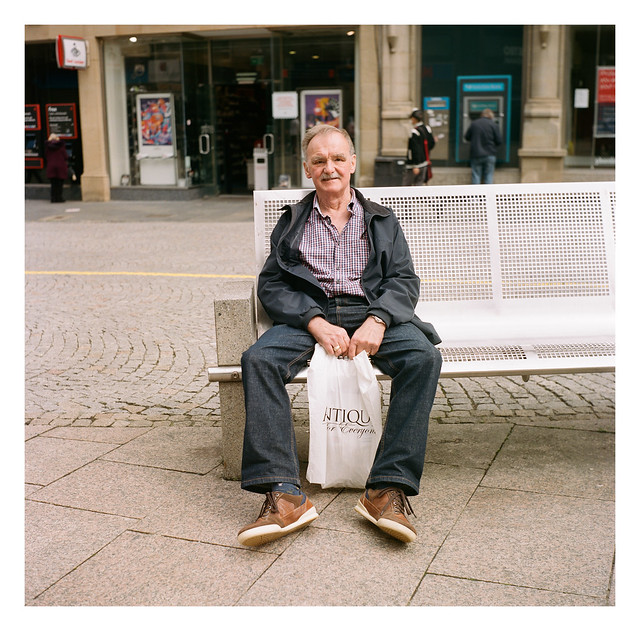 #9 – Another favourite from the set, and the second street musician portrait. I like the sense of action in the picture, as well as the framing of the man and his reflection in the door panels behind him. It’s not completely in focus on his face if you zoom right in, but not so much as to be detrimental to the photograph. 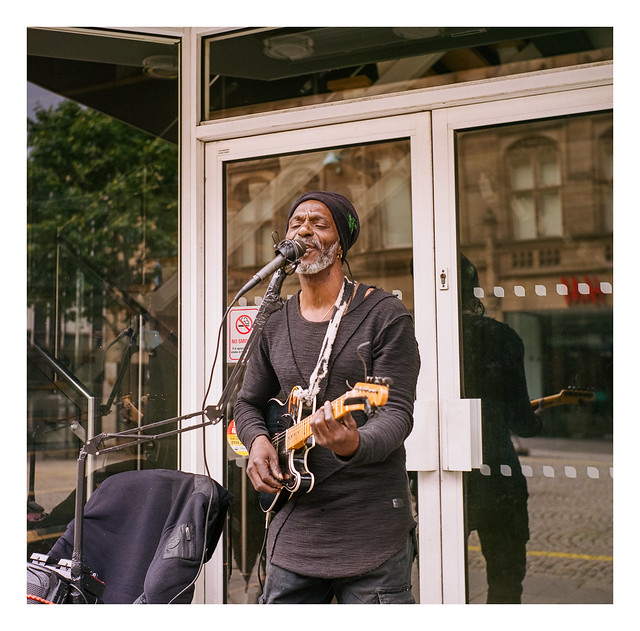 The two shots where I missed the mark were of a girl running an ice-cream van. She had a beaming smils and I’m disappointed the photo was a little out of focus. The second was the last person I photographed on the day, another photographer who was walking the length of the city-centre with his camera – a Nikon F5 I think.

All things considered, I think I did ok on this initial outing. I have a lot to learn, but at least I now know that many people are happy to let a stranger make their portrait, which was perhaps the biggest hurdle for me to overcome.

More to come as the project continues!