A multitude of small yachts moored in the marina at Barcelona, spindly masts poking skywards.

I took this while sitting on a bench ovelooking the marina – we’d walked from the hotel to the city plaza, and from there down Las Ramblas to the spot where this was taken. There’s a modern shopping mall over to the right of this composition and that was our destination (although there wasn’t all that much to see when we got there).

My knee was killing me throughout the trip as I had (and still have as I type this) some sort of injury, although it now thankfully seems to be on the wane. I’m not sure that walking in excess of 20,000 steps each day of the trip had helped it! 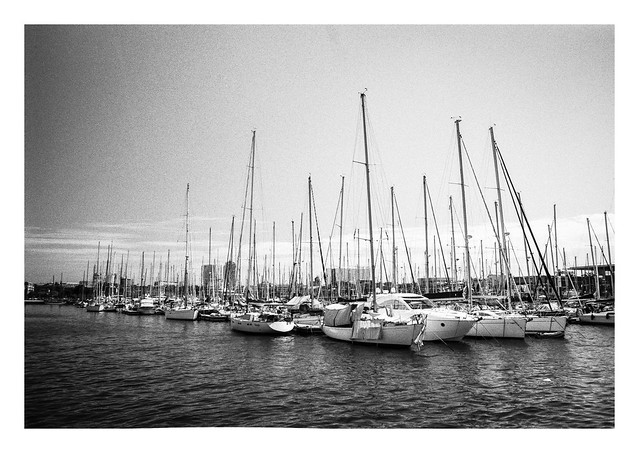 Taken in Barcelona’s Gothic Quarter while I waited for my wife who was browsing in shoe shops. 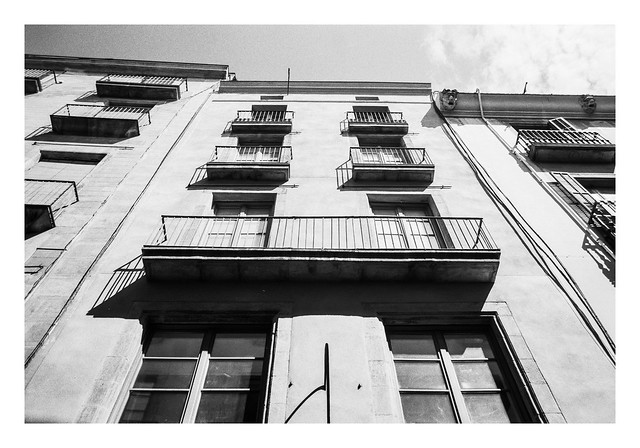 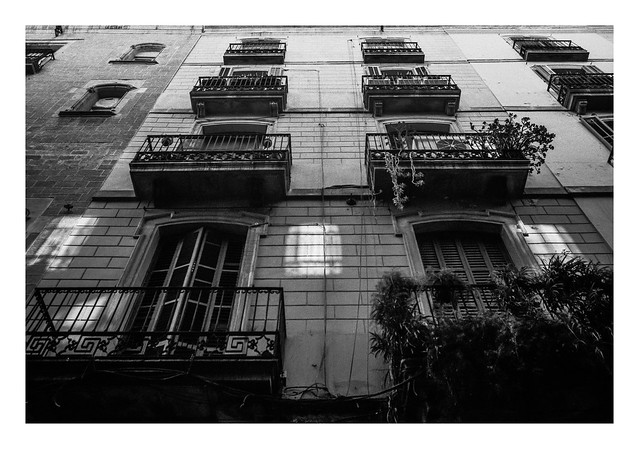 This photo captures a girl giving a somewhat scathing look at her colleague. Or at least that’s what you would assume looking at the photograph in isolation.

It’s something that we see regularly in the media – particularly the press and news sites that make use of still images – where an image will be chosen to suit the tone of the article in which it is used: a sneaky look on the face of a politician the paper is opposed to; the beaming faces of parents with their healthy new baby; the triumph or despair on the faces of athletes; the shadowedy, unkempt look of someone charged with criminal offences. Each representing just a fraction of a second in that person’s existence, and each picked as being the right image to match the tone of the story being told. How often would another photograph, taken just an instant before or after the one selected change the whole feel of the image?

In my photo below, it looks very much like a dissaproving glance is being given, but the reality of the situation is that these girls were smiling, laughing and apparently getting on like the best of friends. My single captured instant is just out of context. It’s a fairly innocuous example, but it goes to show that, while a picture may paint a thousand words, the slightest movement in time can result in a whole new story being told. 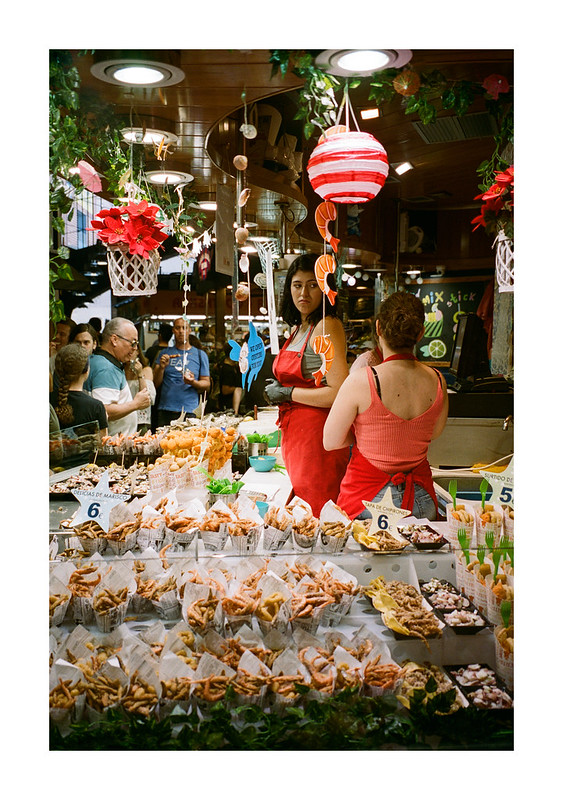 One of those quickie posts today as I have to rush out and might not get the time later. 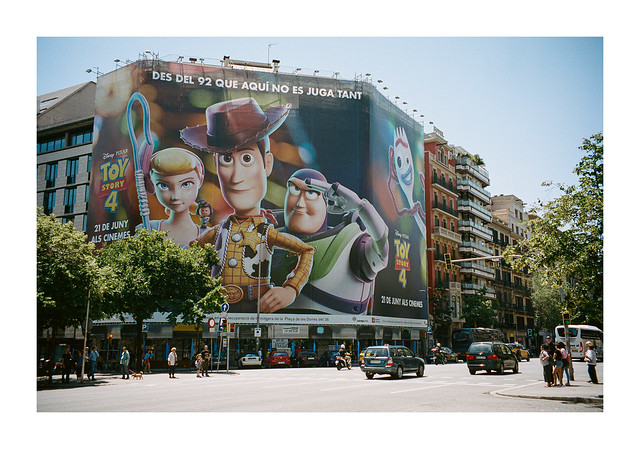 This huge yacht was moored in the marina at Barcelona. The figure stood at the prow gives some sense of scale. There were bigger vessels than this one there too, and what you can’t see from the angle this photo was taken, is the helicopter perched on the back of the boat.

I suggested to my wife that a boat such as this would make a fine birthday gift, but she didn’t seem to be listening… 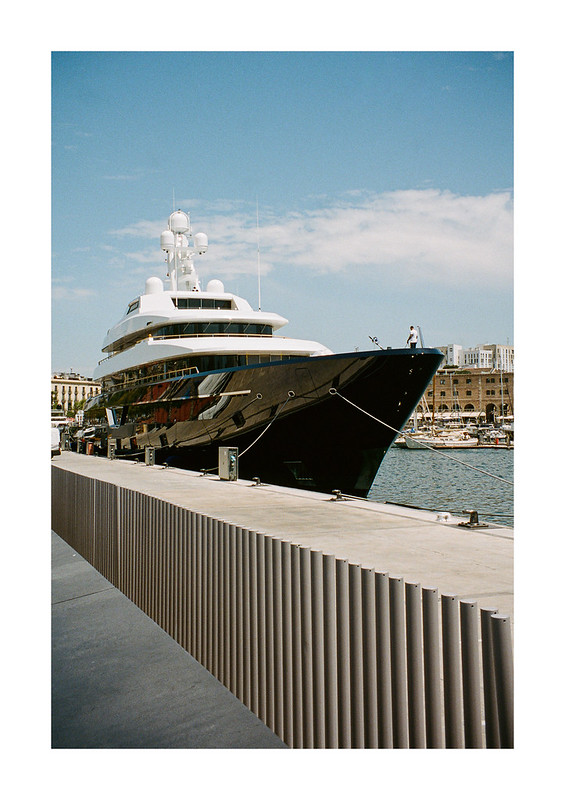 In Barcelona’s Gothic Quarter there was a shop with a large display of scissors in its window. I particularly liked this chicken-shaped pair to be used for snipping the top off a boiled egg. 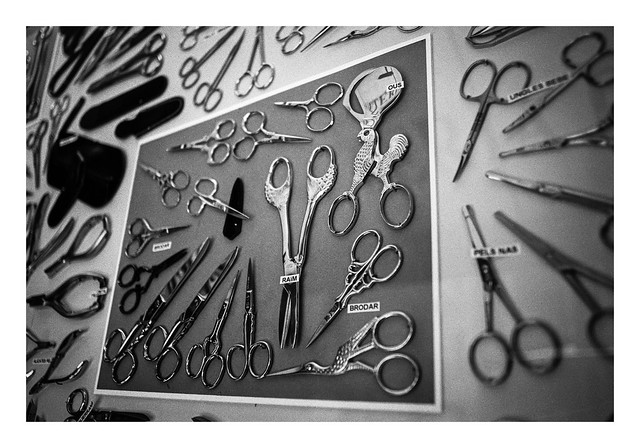 A forum I frequent has been running a disposable camera challenge where each participant can enter up to three photos taken with a single-use camera. I didn’t have a disposable laying around, so I bought myself an Ilford XP2 model especially to take part ( I had planned on getting the HP5+ variant, but the shop didn’t have them).

I’ve used it on three occasions – in Sheffield on the day I bought it; in London when visiting for a work meeting; and in Sheffield again this weekend just passed.

The camera itself is (or was – it’s been destroyed presumably when the film was developed) a very lightweight piece of kit with a snazzy red and white striped design. It feels like it would smash into a million pieces if dropped on a hard surface. Feature-wise, it has a viewfinder, lens (30mm f/9), flash activation button, shutter button, and a film-advance wheel. And that’s your lot.

In operation there’s not much to do other than frame the shot through the basic optical viewfinder, click the shutter, and wind on to the next frame. The frame counter is reversed so you can see how many shots remain. The flash is advisable for dim conditions – I took several frames in what appeared to be decent light in St. Pancras railway station and they’re all pretty much useless.

In terms of the results produced, they’re pretty much as you’d expect from a disposable camera with a plastic lens – soft at the edges, but with acceptable sharpness in the centre of the images. Of the 28 frames I eked out of the roll I probably have half-a-dozen that I like, several more that are ok, but nothing to write home about, and the rest are underexposed or just badly composed – I think I had a bit of a tendency to ‘snap’ images with this camera rather than taking my time to find better pictures with it. That said, I’m really happy with the first two of the five shots I’ve posted here today, and the others aren’t bad either.

I can’t honestly say I’ll bother with a disposable camera again – even if the competition is run anew in future – especially given the other good cameras I have, but it was a good experience nonetheless.

So, here are five of the photos I took with the camera.

This one is my fave of the bunch. It’s not a sharp as it might have been had I used a different camera / lens, but I’m really happy with the result. This was taken at the Barbican Centre in London 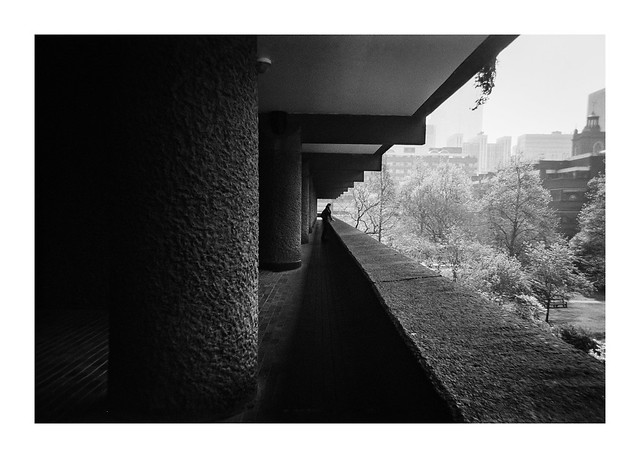 Another one I really like. It’s mostly negative space, but I think it works well. This is Blast Lane near Sheffield city centre. 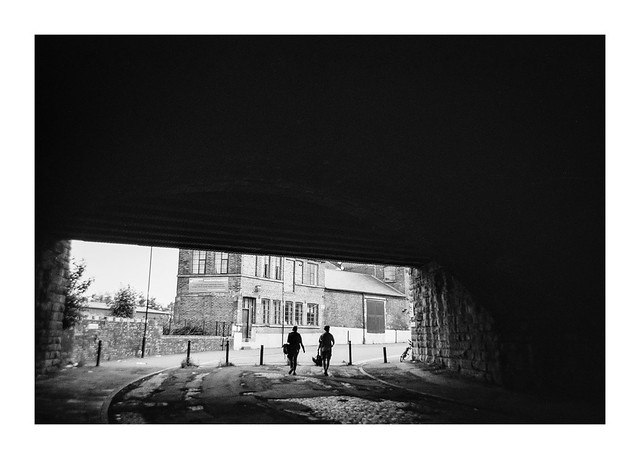 This golden taxi sits atop the cab firm’s offices on Abbeydale Road in Sheffield. 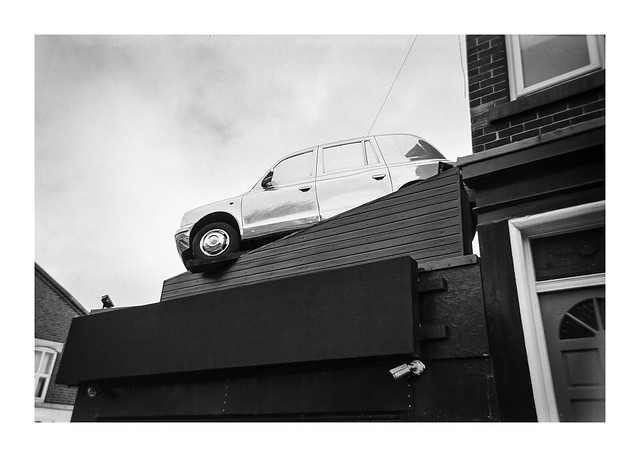 The lens on the camera had a tendency to flare in certain conditions, here rendering the figure with a ghost-like haze. 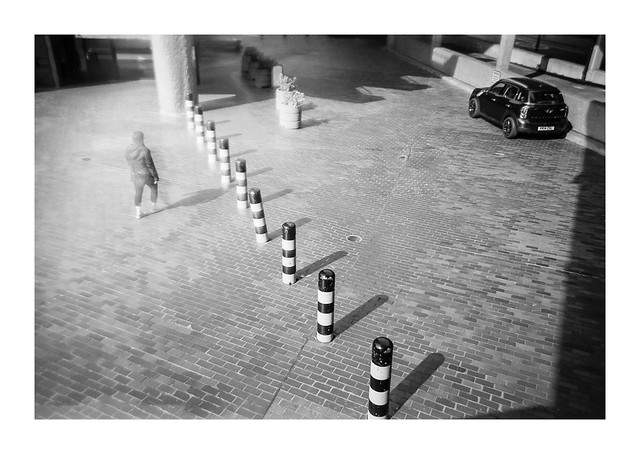 And finally, another shot from Blast Lane where a dmaged bicycle lay (I presume) abandoned next to the tunnel. 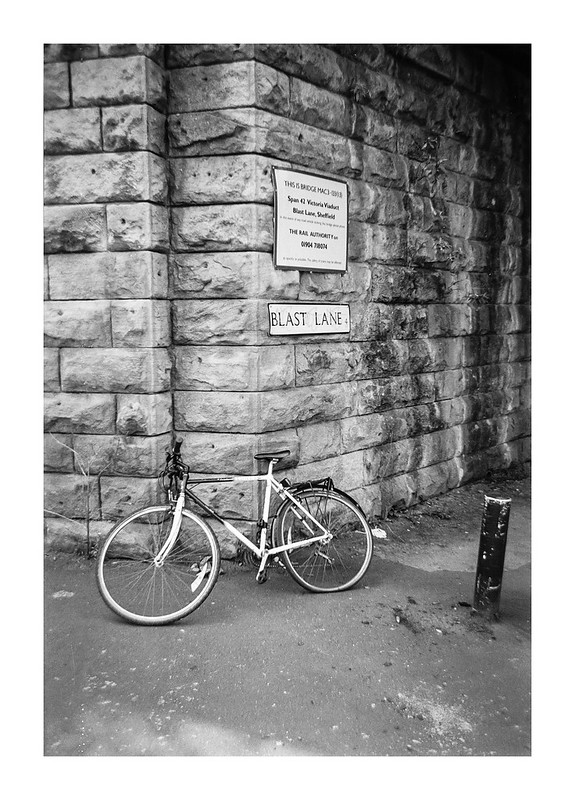 Anyone else gone the lo-fi disposable route?

A stallkeeper prepares produce on this stall in Mercado de la Boqueria in Barcelona.

I guess, following on from my picture a few days ago, that this is another shot that might have benefited from being in colour, but the black and white still works well because of the contrast, I feel. Plus I do have some other shots of similar stalls taken on Protra 400, but I’m waiting for those to be processed.

From looking at this photograph it would be easy to assume that the market had only just opened, or was not very busy, but it is in fact a very rare moment when there weren’t dozens of shoppers and tourists milling around in front of my lens (and I cropped it a bit too!). 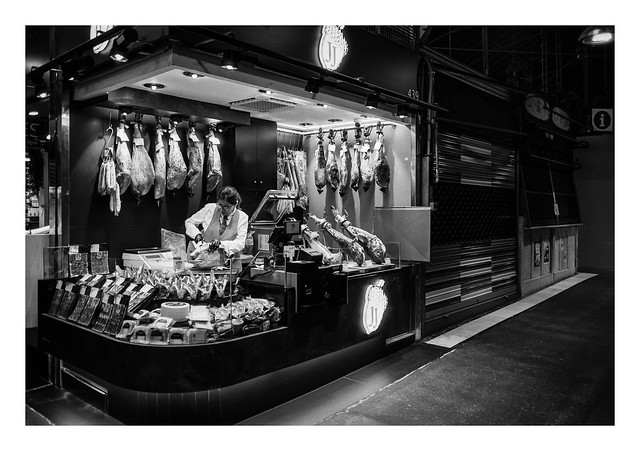 I’m not sure of the precise location of this shot – it was taken as my wife and I wandered the narrow streets off Barcelona’s “La Rambla”, and was probably in the Gothic Quarter somewhere. It’s a shot that made me glad of the 28mm lens I had attached to the camera. 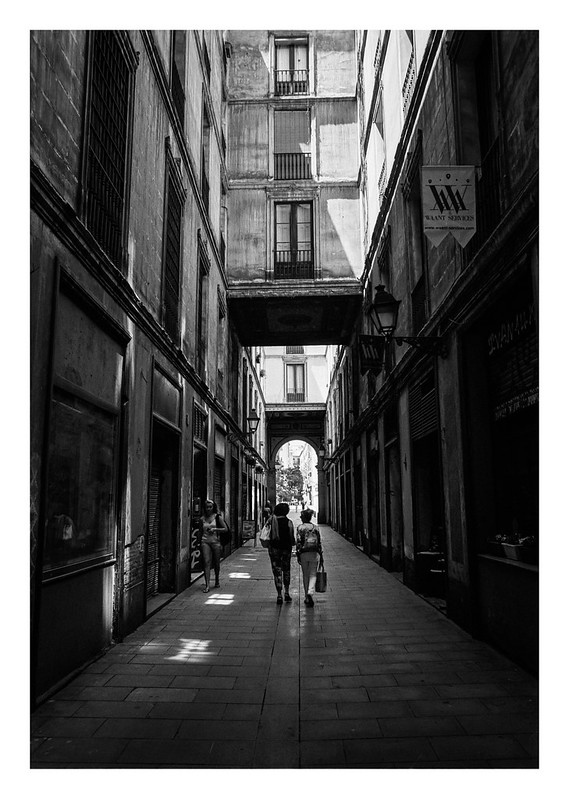 Here’s a photo of a couple of chilled fruit drinks that my wife and I enjoyed in a cafe / bar on the first day of our short break in Barcelona. The drinks were extremely pleasant on a hot day, and consisted of a fruit cocktail enlivened with ice-cubes and frozen fruit. It made for a colourful display.

My first choice was to take a shot on the Portra 400 that was in my Z135 as this would have picked up the colours in the liquid and, especially, the reds, purples and oranges of the berries and mango pieces. However, try as I might, I just couldn’t get a composition I was happy with using the camera – although it has a macro mode, it didn’t frame the scene well, and shooting wider at the camera’s minimum focus range led to far too much of the surroundings getting into the shot.

So, I took the shot with the OM-10 and 28mm lens I had attached (in the interests of travelling light and not annoying myself with the urge to switch lenses all the time, the 28mm was all I took for the SLR, and it turned out to be a pretty good choice of focal length for the streets of Barcelona). The 28mm lens in question is a Cimko model that allows close macro focussing, so I was able to get in nice and tight even with the wide-angle of view, and the f/2.8 maximum aperture meant I could get enough light in the slightly shaded position we were in. The only real issue with using the OM-10 was the fact that I’d loaded it with HP5+, so I had to forego the lovely colours on show and hope for the sense of cold refreshing beverages to still shine through in B&W.

I love black and white film, but colour film does have the advantage of being easily convertible to monochrome if required, whereas (short of fancy techniques to combine three images shot using red, green and blue filters) black and white film is pretty much what-you-see-is-what-you-get.

I’m not sure if it’s a better shot in B&W, but it still works pretty well, and was “interesting” enough to get into Flickr Explore yesterday. I’m happy with it though and, given I take photos for myself, that’s what matters I suppose. 🙂

Anyone else had a similar conundrum with colourful scenes and black and white film? 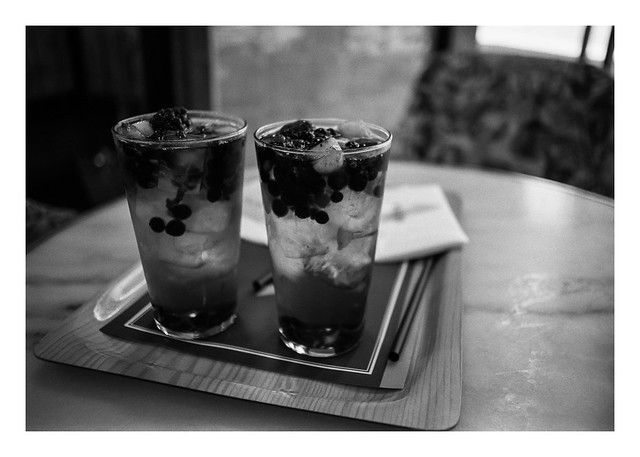