As well as the roll of expired Tri-X that I wrote about yesterday, I’ve also recently shot a roll of Tmax 100 which expired in September 1994 (one of the other rolls I got at the car-boot sale). I shot the first few frames of the roll back on 19 August, mostly because someone reminded me that it was World Photography Day , and I thought I ought to at least take a few photos to mark the occasion (although I didn’t participate beyond taking the shots). As I didn’t have the opportunity to go out, I took some pictures of some flowers in a vase that were in the house. I took a couple of shots inside with the Nikkor 50mm f/1.8 attached to my F70, and then moved the vase outside and took a couple with my Sigma 105mm macro.

While I had reasonable hopes that I’g get some decent shots, I still expected the film to show signs of its age, so I was flabbergasted when I got the results – the tones, contrast, and fine grain of a film that should’ve been processed 23 years ago are absolutely gorgeous to my eyes. The only consideration I made to the film’s age was to shoot it at half box speed (50 asa) to compensate.

I’ve got a few other rolls of expired B&W film (although no more Tmax) and I’m now very much looking forward to seeing if they can render similarly pleasing results.

Here’re a few shots from the start of the roll (although I’ll definitely be posting additional images over the coming days and weeks as I like most of the pictures that I got). 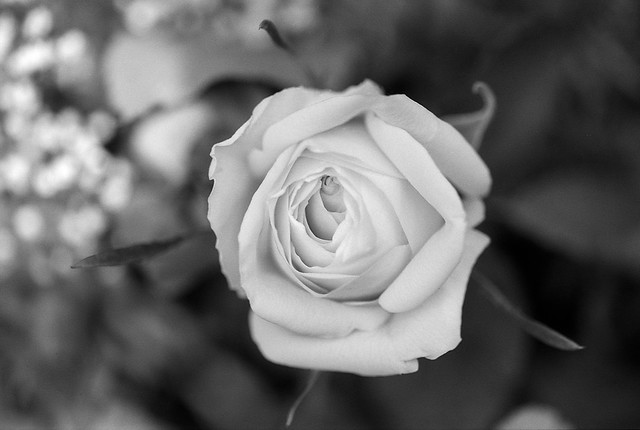 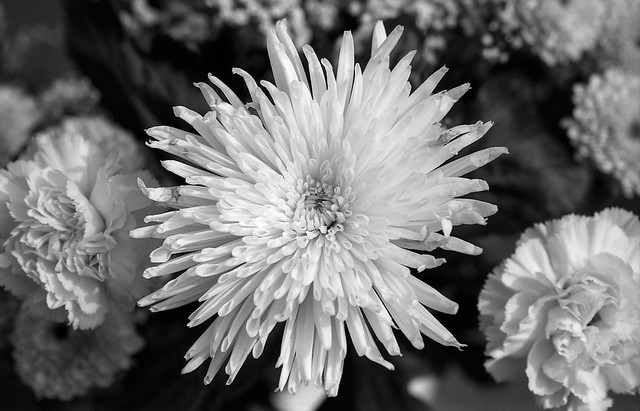 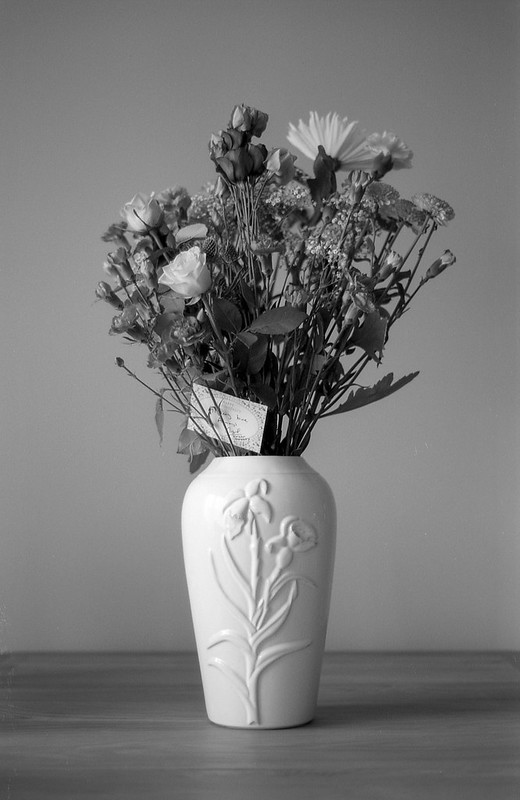 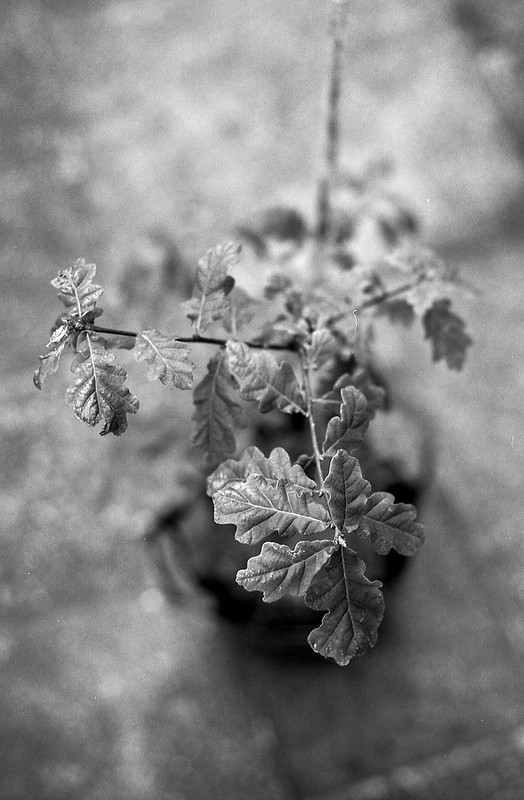 A few weeks back, I bought an old camera, some old negatives and slides, and a few rolls of expired 35mm film from a chap at a car-boot sale I visited. As I paid for the stuff, he threw in a roll of 120 format Tri-X as well. The following shots are from that roll (which I shot during a walk on Monday).

I’ve no idea how expired the Tri-X was, but I’m guessing (given the ages of the other films I bought), that it was lat least 20-25 years expired. The backing paper was a green-colour and it was labeled as Tri-X Pan. Given the age, I shot it at 160asa to attempt to compensate, and while there is some additional grain present in some of the shadowed areas, and there were a few streaks of chemical residue that I had to remove in Lightroom, on the whole I’m pretty happy with the results. Especially the shot of the pigeon.

These were taken on the Five Weirs Walk (or the first bit of it, at least) in Sheffield, which follows the River Don through the industrialised east-end of the city. 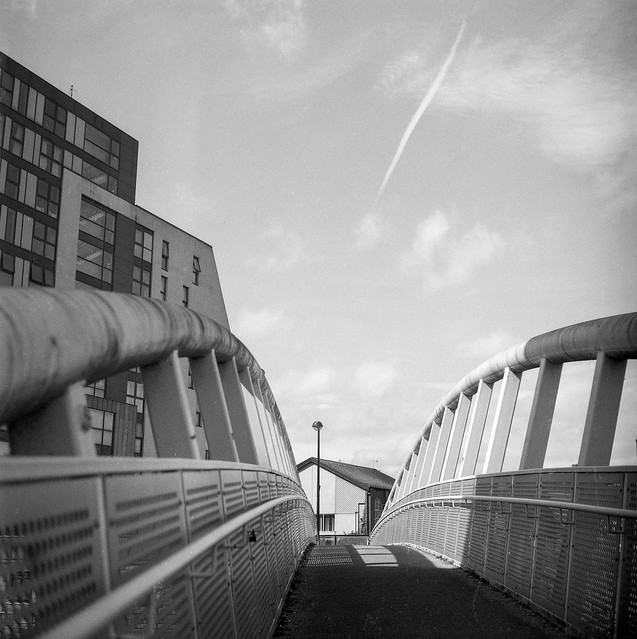 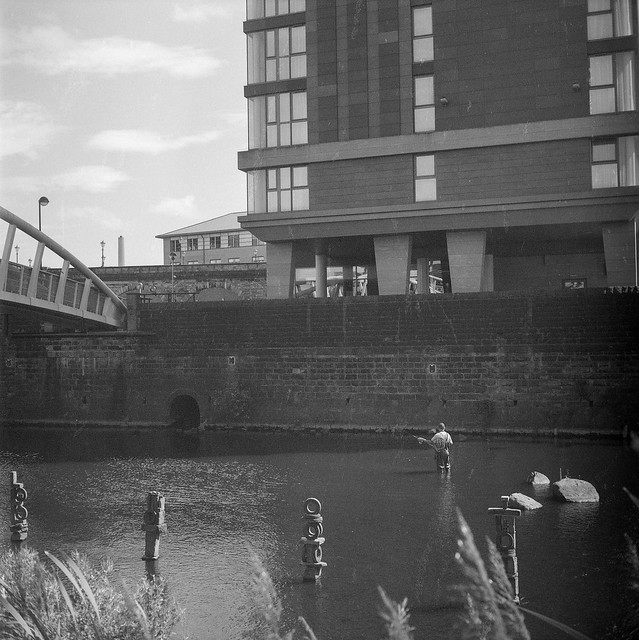 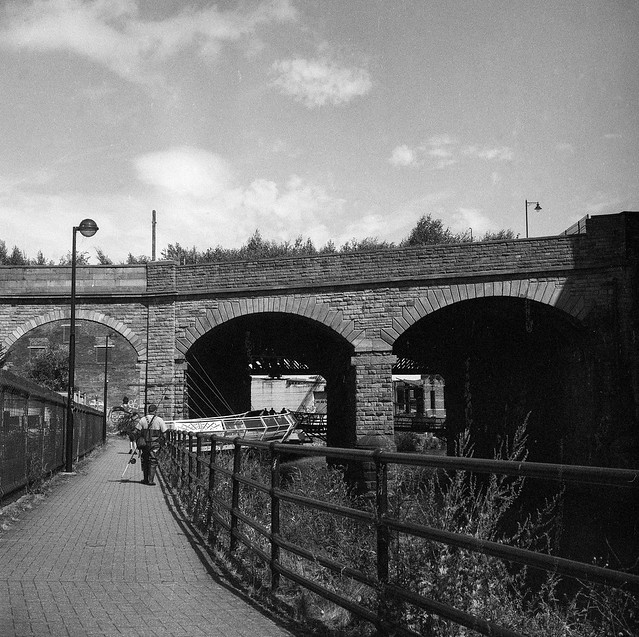 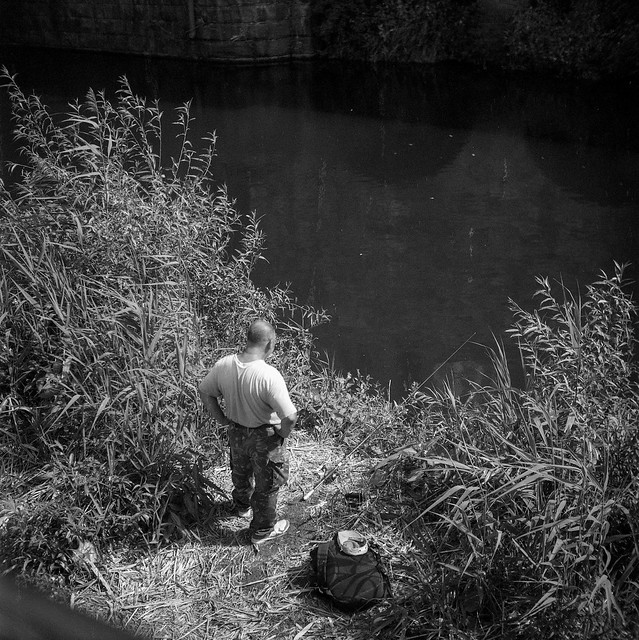 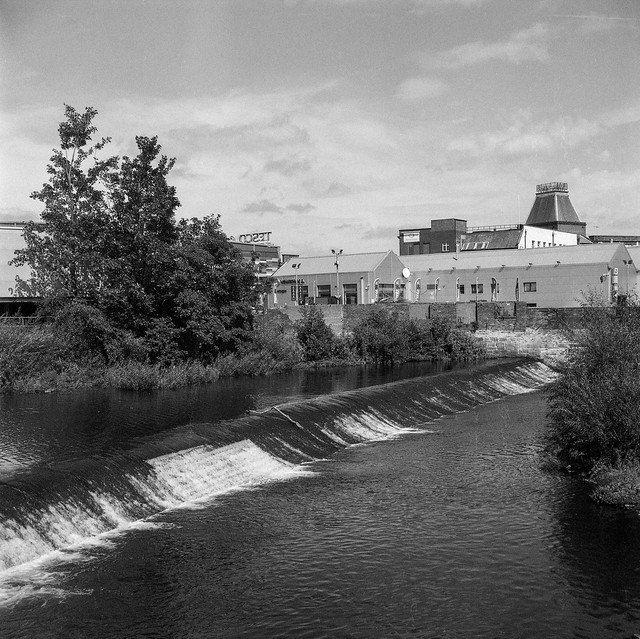 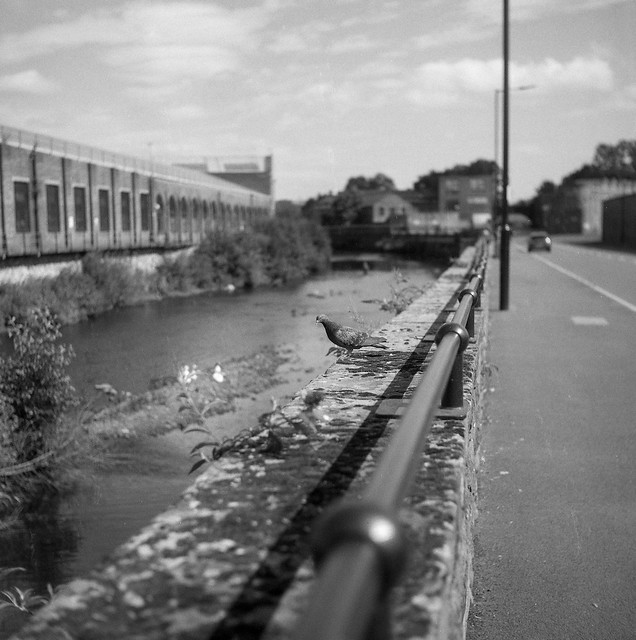 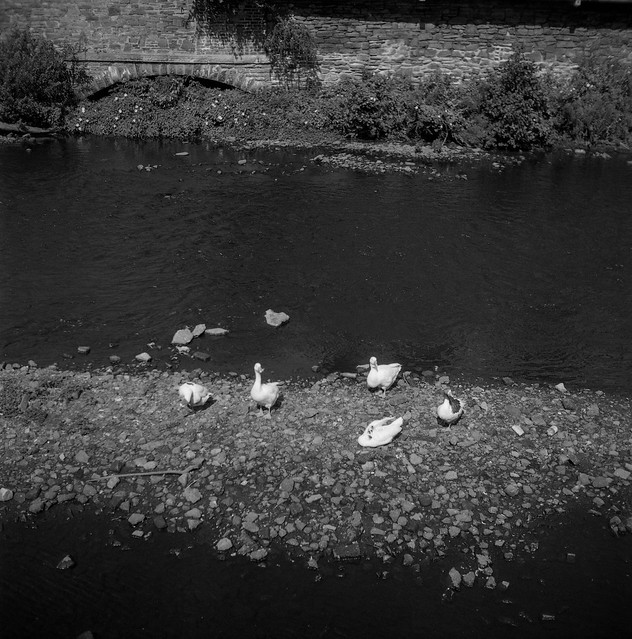 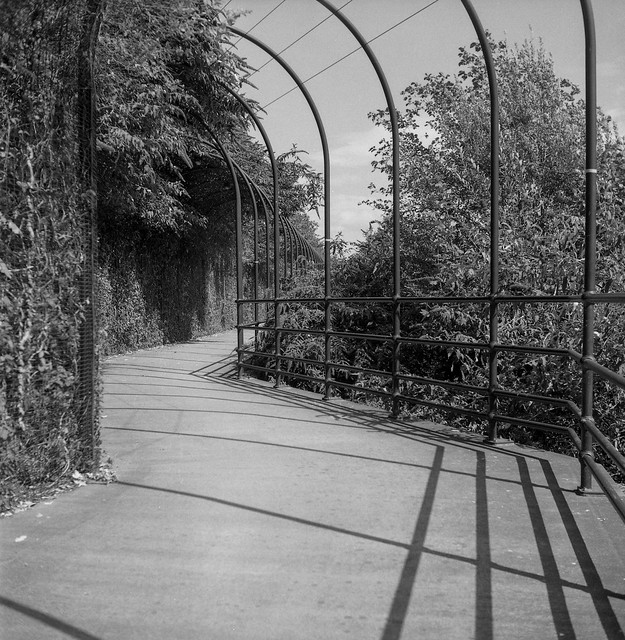 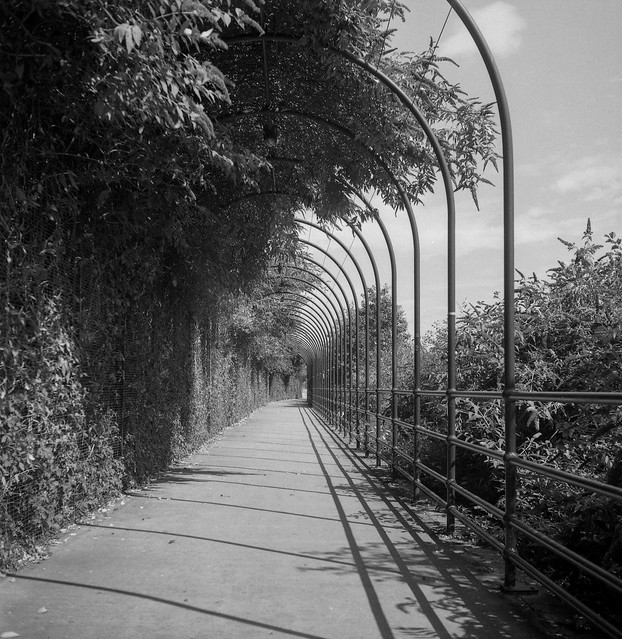 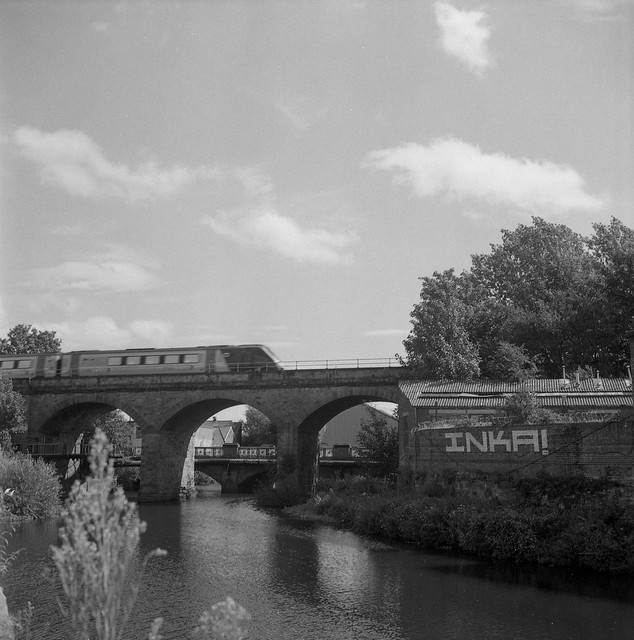 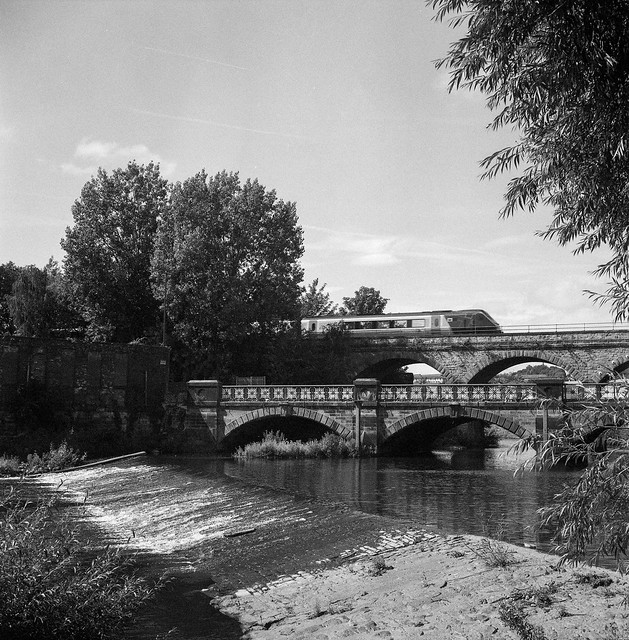 A photo from the first roll of medium format film I shot, back in October 2016 on my first medium-format camera. Most of the photos on the roll were uninspiring, and I rushed through it in my eagerness to see what results the camera would give. The camera in question was a Lubitel 166 Universal, a relatively no-frills Soviet era TLR, but one that (despite the difficulties I had in focussing and framing my shots) is capable of very nice results indeed, and this is one of (perhaps the) best of that first roll.

This was taken at the Classics on The Moor classic car rally in Sheffield a few weeks ago. It’s another of the underexposed Rollei Superpan 200 shots, but another that I think works despite the dark tones. 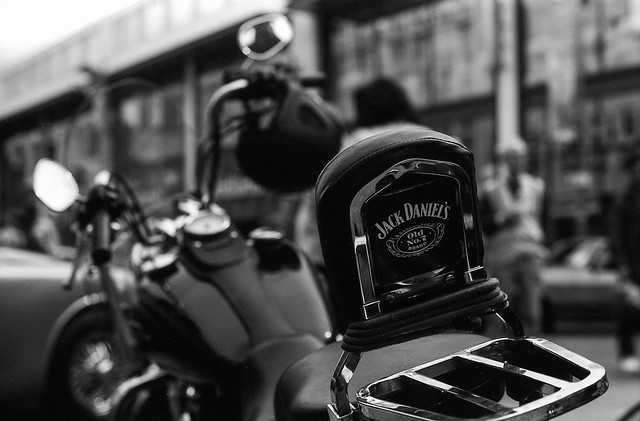 I took this photo a few month’s back, mostly to use up the final frame on the roll so I could go and get it processed. I didn’t do anything with the shot other than scan it, but on coming across it again tonight, decided that I quite like it. 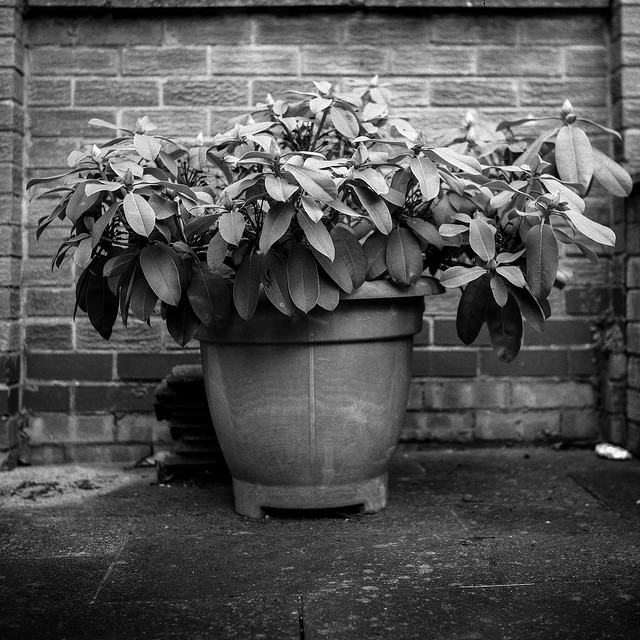 It’s nice to see that, even in a modern city, that there are still signs of its heritage if you keep your eyes peeled, such as these Grade II listed former cutlery and grinding workshops close to the centre of Sheffield. 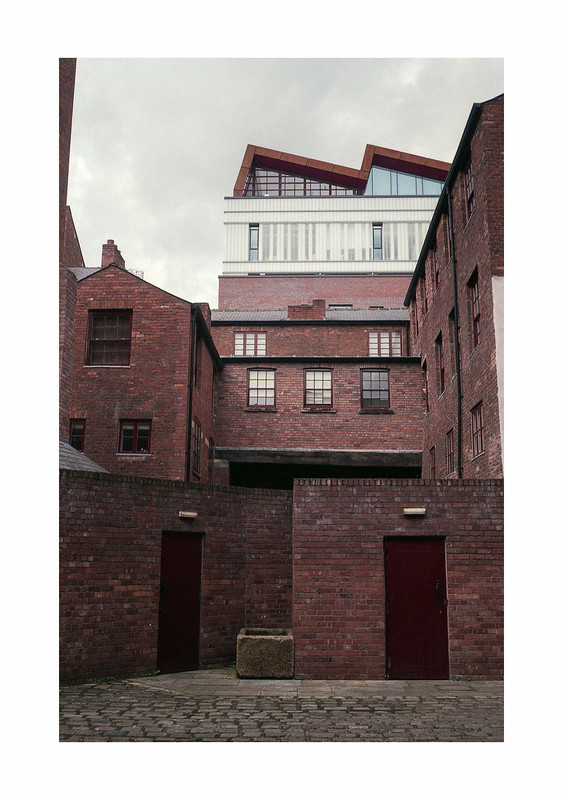 Another snap, this time in my house, where I liked the light falling on this elephant-shaped watering can. Shot with my £2 Olympus Superzoom 105 G compact. 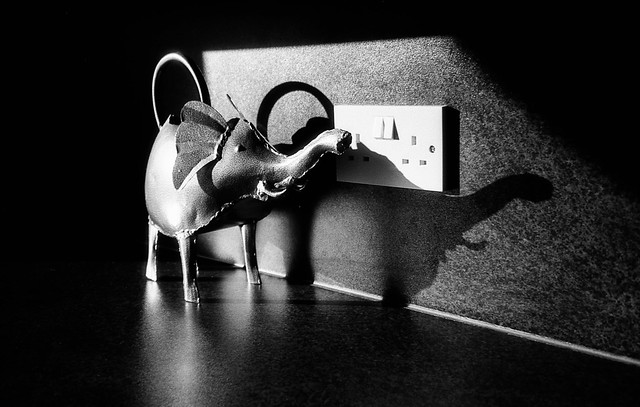 Another shot I’ve recently re-scanned. This is Canning Dock in Liverpool, UK, which I visited last October. 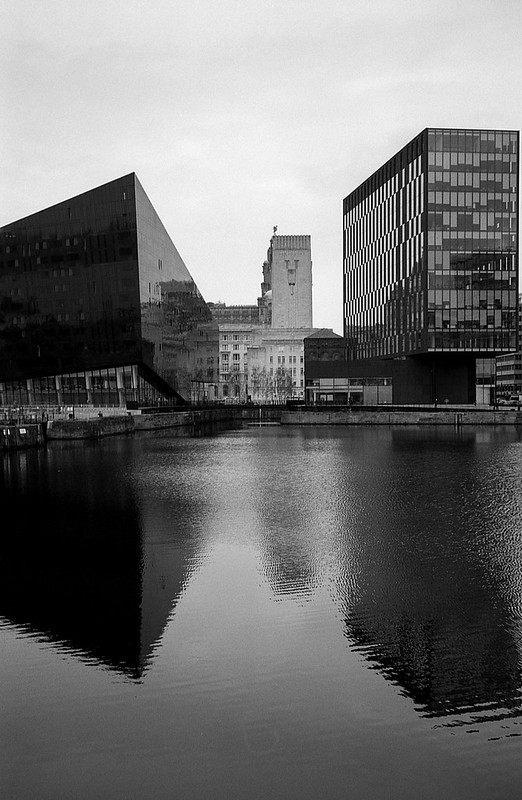 After seeing some lovely low-key film shots on a forum I’m a member of, I decided to go ahead and produce one myself. I’ve done low-key before, but mostly digital, and I tend to chicken out from crushing the blacks too much and end up bringing the detail back up. In the shot below, I went all-in, and a large chunk of the image is pure black.

It was an underexposed shot to begin with – the entire roll, despite being shot at box speed on a camera with a correctly working meter, came out thin, and with lots of speckles of dust-like marks. In fact, this is the second roll of Rollei film that I’ve had this issue with (the first being Rollei Retro 400s), although a roll of Superpan 200 in 120 roll format came out just fine). I don’t have any more at present, but think I will shoot it at half-box speed in future.

Anyway, back to the picture. Despite the flecks of white scattered across the image (I cleaned most of them up, honestly!) I think it works quite well. 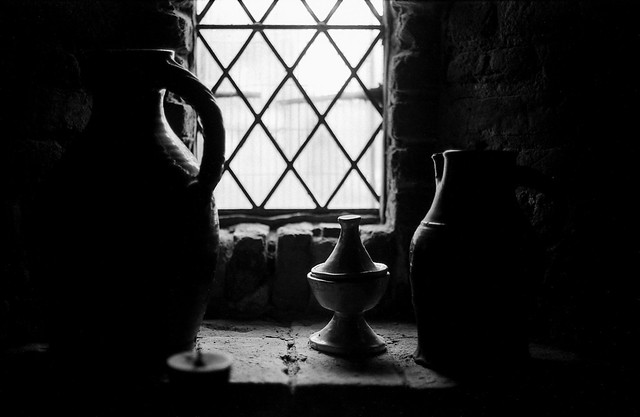 On a visit to Gainsborough Old Hall recently, I came across a small art exhibition running through some of the rooms. One of the objects was a vintage pocket watch with a small plastic doll squashed up inside it and entitled “Watch Case Infant”. Sadly, I can’t remember the meaning of the piece (and I’ve thoughtfully missed of the bit of the white card containing the text), but it makes for a pretty nice picture, I think. 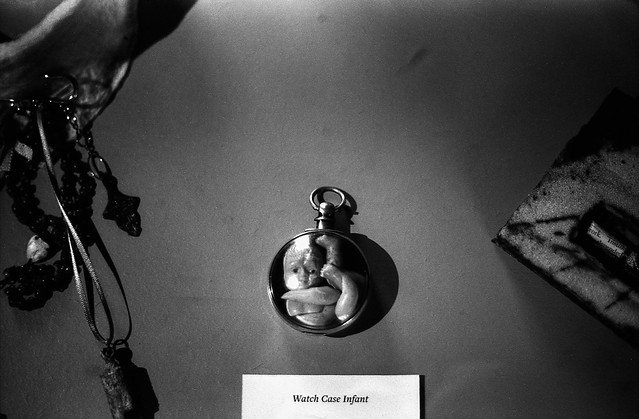