Ah, the giant ice cream cone, a signature piece of street furniture at seaside resorts around the country. While I don’t got out of my way to find these giant plastic dairy treats, I almost always seem to photograph them if the opportunity arises. Maybe a post with all my gathered giant ice creams will surface one day!

This one is in Hull, next to the marina.

You can glimpse other massive ice creams here, here, here and here. 🙂 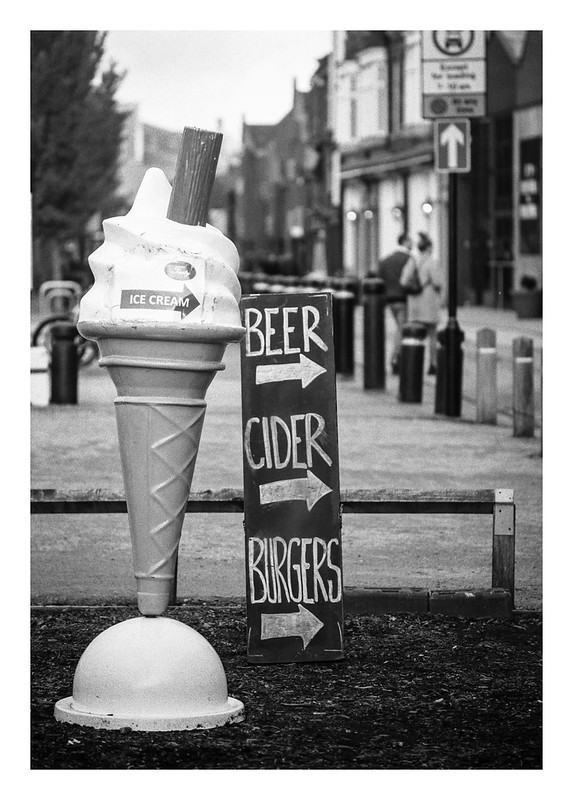 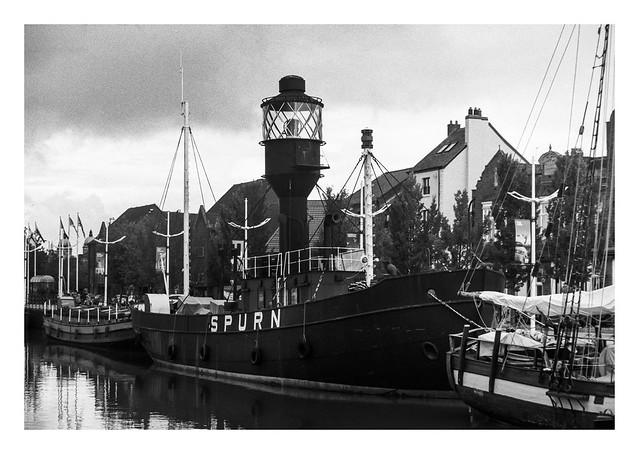 A triplet of photos all depicting the Humber Estuary. The added grain that has appeared due to the push-processing of the Ilford HP5+is readily apparent here but gives the images some grit, which I like.

The first two photos are looking eastwards as the estuary flows towards the North Sea – the first with The Deep, Hull’s aquarium and sealife centre, jutting into the left of the frame; the second a longer telephoto shot from the same location, towards the ferry and freight terminals. 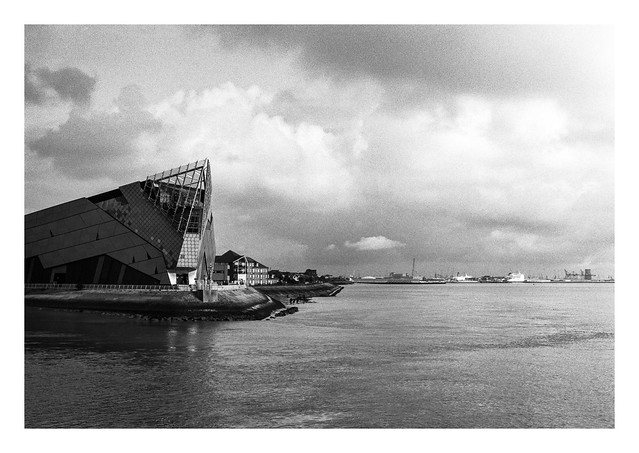 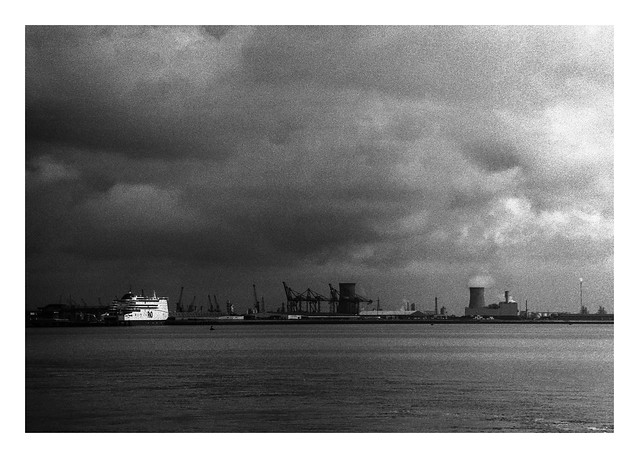 The final image is looking west, back up the estuary towards the Humber Bridge which can be seen lurking in the background. 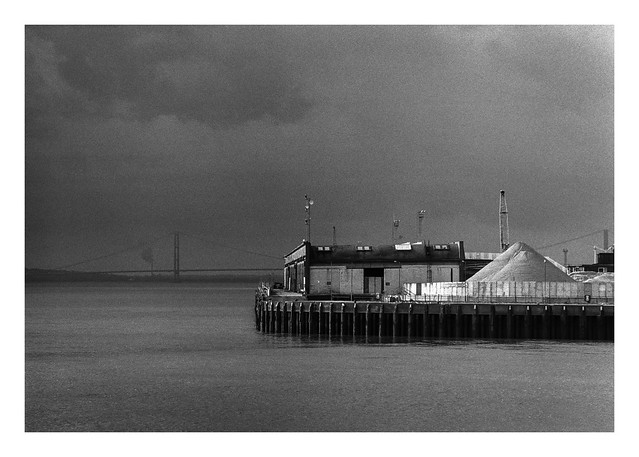 This caravan was parked next to the Minerva pub on the bank of the Humber Estuary at Hull and the words written upon it made me smile. For those not from the UK (or anywhere else that has a fanbase for The Housemartins), the words are a play on the lyrics of the song Caravan of Love. The Housemartins originated in Hull, so it seems particularly fitting somehow (although I’ve no idea if the band were gin drinkers or not). 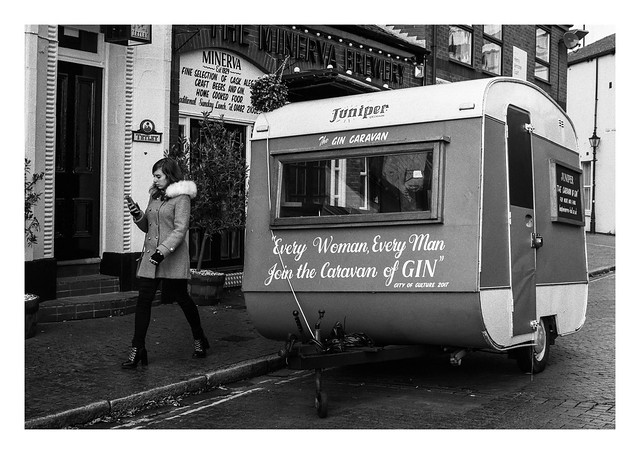 A couple of photos for today’s blog post. One looking south(ish), the other north(ish) from opposite sides of the same street.

The first – the southerly-facing picture – is of Hull Minster. It’s a slightly odd image aspect ratio as, for some reason, the negative for this frame was missing a slice. I like the way there are several couples going about their business in the scene – in fact it almost looks like they might be following each other, walking in an anti-clockwise circle from one side of the street to the other. You can see the tables and chairs at the bottom of this frame in the second picture too, which indicates roughly where I stood to take this first photograph.

I didn’t go inside the minster on this occasion (although I have in the past). I find churches to be impressive buildings, always full of interest – both architecturally, and also because of their history and the artifacts within, especially those with original fittings, and Hull Minster doesn’t disappoint in that regard. Alas, I didn’t have time to pay a visit this time. 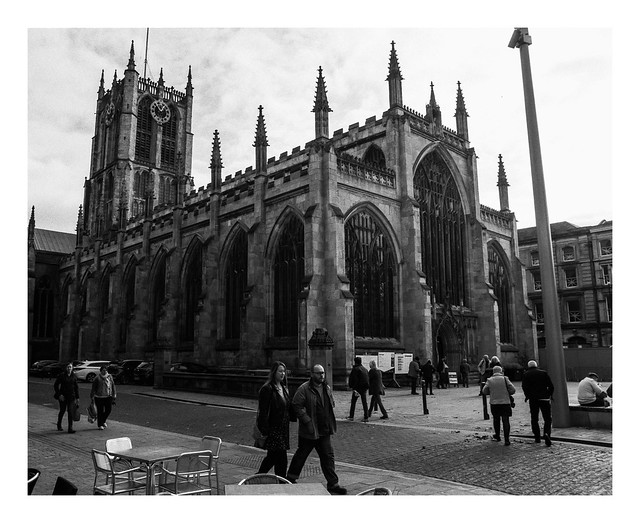 The second image is of the northerly view and was taken from a position to the right of the post in the picture above – there’s an open plaza in front of the minster, which is where I stood.

I took a couple of variants of this shot. The one I didn’t use had a number of things I liked – a woman in dark clothes framed between the two windows on the left of the image, and the people at centre right were crossing the road and no longer partially obscured by the bin. The one I’ve posted below has the guy in the middle doubled over though, and I didn’t want to lose that. I think he was looking at something in his lap (or maybe even praying with clasped hands), but in the next shot he’s upright again and it lost a little interest as a result. 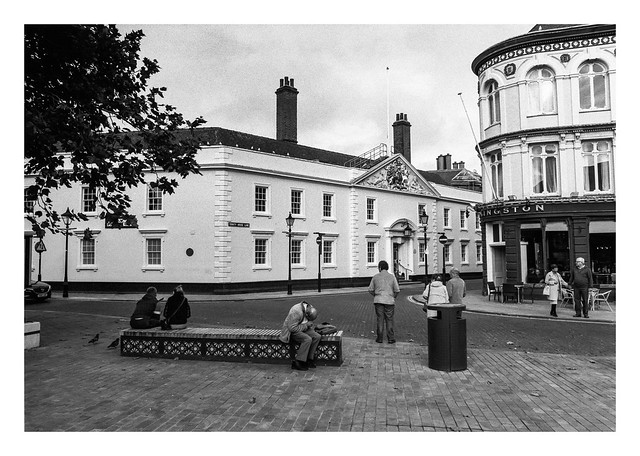 There’s another, slightly different, viewpoint on this location in this post from a couple of years back.

This mossaic-coated toad sits on the grass outside the Streetlife museum in Hull, where I had a wander around while waiting for the photo exhibitions to open. I smiled as I imagined just how many people must have clambered onto the giant amphibian before the powers-that-be decided to invest in a sign and (somewhat ineffectual) fence in an attempt to ward them off. 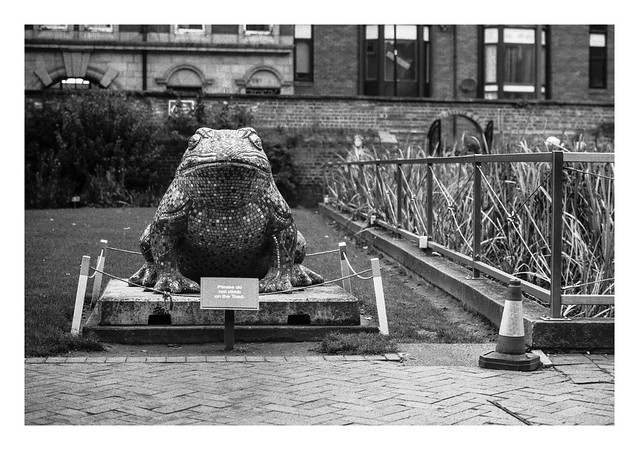 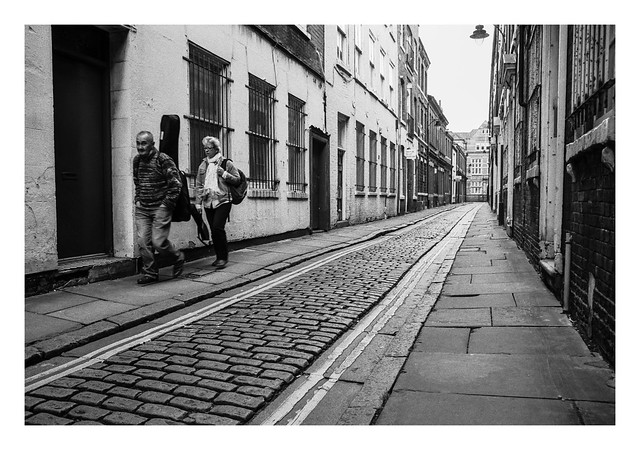 On my visit the HIPFest last weekend I discovered upon arriving that a) there was no longer a charge to enter the exhibits (it  cost £5 for a wristband that granted you access to all the gallery areas on my previous visits) and, b) that the galleries (apart from the display in the main atrium area) didn’t open until noon (it was a little before 10:30am at this point).

Given that I’d planned on spending some time walking around Hull town centre taking photos anyway, this wasn’t too big of an issue, so I set off for a wander. I’d done a bit of a recce before the visit – Google Streetview is very handy for this – and had found a location that might make for good pictures, so I headed off to find it.

The first three images today are of the place I found on Streetview, and the last is of an alleyway that I found by chance slightly later. 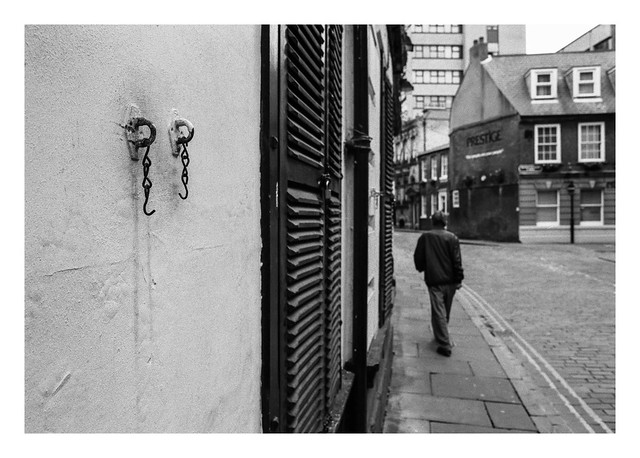 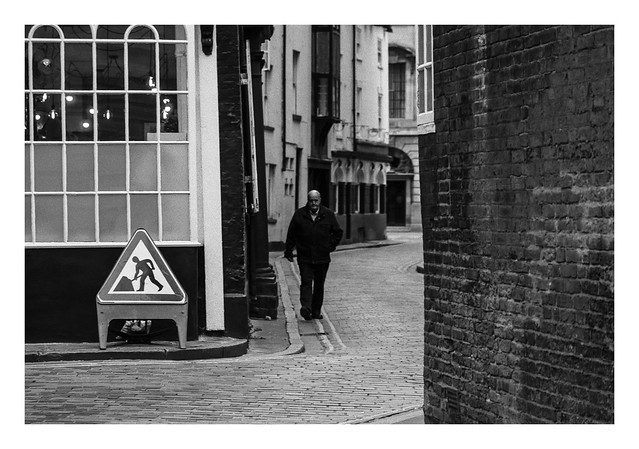 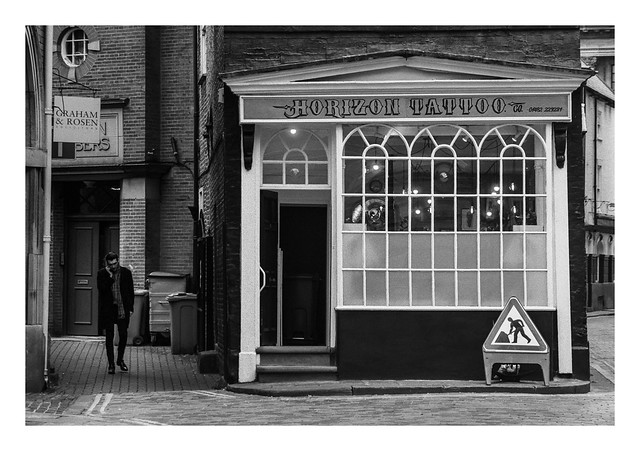 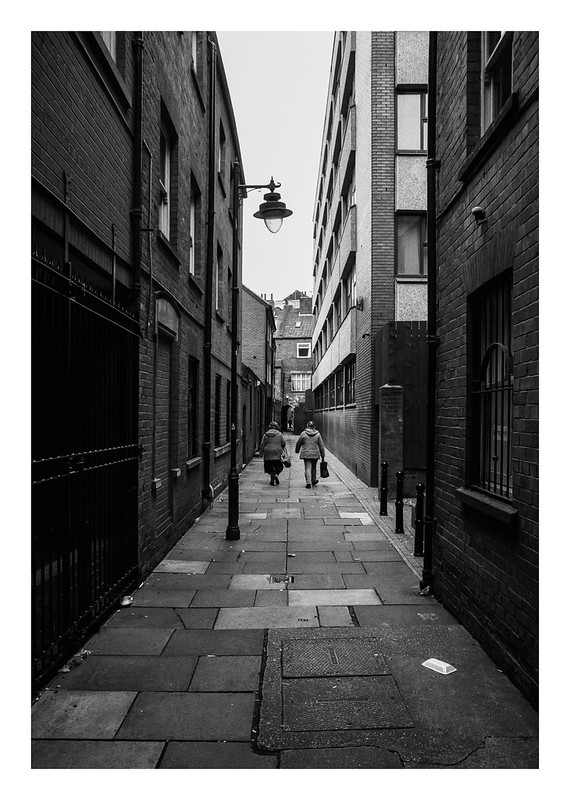 I’ve just got back from two days in London for work stuff, so don’t have it in me to type much today I’m afraid, so here’s a picture of some escalators and a lift that I took in Hull last weekend. 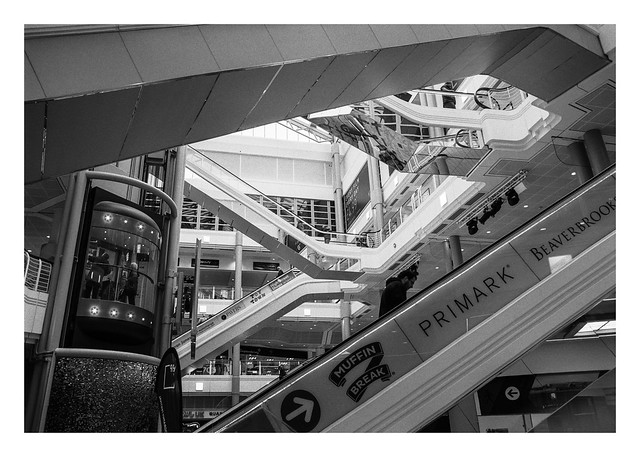 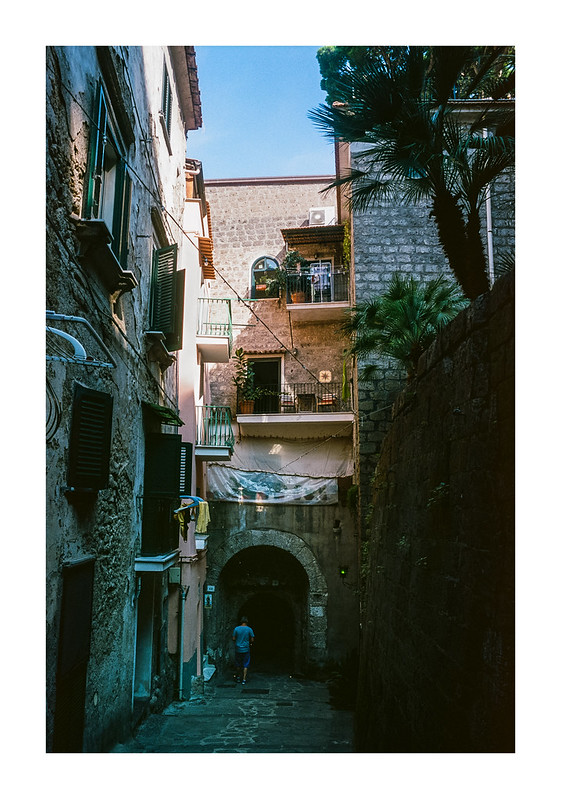