I like my Holga camera. I find, despite its lo-fi credentials – plastic lens, single shutter speed, being built like a cheap toy etc. – that it can produce some sublime photographs when used to its strengths. It’s notable in my case though, that this generally tends to be where black-and-whitefilm is concerned. While I’ve probably not shot enough colour film with the camera for this to be a fair comparison, I’ve found my non-B&W results to be less impressive.

For this roll, it probably doesn’t help that it’s an expired film with some colour shifts (albeit nothing too bad), and one that I had some trouble scanning to my satisfaction to boot. It might also be argued that the images I made are not my best from a compositional point-of-view either – I’m not sure I was seeking to get the best from the roll, rather than just using it up.

Whatever the case, I don’t think these work as well as they might have done in B&W. I don’t hate them, but the feel a bit “meh” at the same time. I’ll leave it up to anyone who reads this to make up their own minds on the matter.

A plastic piece of junk?
Beauty is more than skin deep
I think you might find

The final snowy Holga shot today, unless I make more We have had a snow warning for the coming weekend…

This water-side willow tree has featured a number of times previously in the blog. It (and a couple of other trees) tends to make a nice point of interest on this section of the lakeside, which is otherwise a little bland.

The ground here, despite it looking nice and snow-covered in the photo, gets very waterlogged, and I had icy mud pouring across the toes of my boots as I walked. Good job they’re waterproof! The geese were a little wary of my presence, and quite a few of them skedaddled out of the scene before I made the picture, but I still got enough of them in the frame, I think.

The penultimate image from the roll I put through the Holga in the snow. Taken at Rother Valley Country PArk, looking back towards two former railway bridges, remnants of the time when this was an area dedicated to coal mining. The foreground bridge is disused and, while you can get up on top of it without any restrictions, it just carries a track through the trees, the stonechippings on the ground a reminder that it once bore railway tracks.

The bridge in the background now carries the Trans Pennine Trail on the section heading south towards Chesterfield.

Many locos once
Carried coal across these spans
An industry lost

I think that this is my favourite shot from the roll I put through the Holga on the recent snowy day (although not the most recent lot though. We had another fall this morning that caused chaos for early morning drivers on their way to work – my wife included).

I like the way the birches lean across the path here and the snow adds a special touch. The lone figure further down the path is the icing on the cake.

I’m tempted to start throwing in the lyrics of the Grandmaster Flash classic. 🙂

Today’s photo is one that I’ve made before, from almost exactly the same spot, using the same camera and film. Apart from the fact that I pushed this roll by a stop, the technicalities of the picture are almost identical. The only real difference is the conditions when the images where made. I’ve published the original picture before here, but will add it to this post too so they can both be easily compared.

Two pictures the same
But seperated by time
Such differences

First the new image, made a couple of weeks ago:

The next in a sequence of photographs which, if you know the area, kinda maps the route I took when out walking on the day they were made. There are a few gaps where I’ve omitted some of the shots from the roll (and, unless I change my mind, the next one will have a gap of half-a-mile or so from today’s).

I guess this image might have been improved by a person waiting at the stop, but no-one was in need of a bus at the time, so it’ll have to remain human-free.

I’ve now managed a full month of haiku’s too. I’m not suggesting they’re good haiku’s, but haiku’s they are. 🙂

Continuing the series of photos made during my walk in the snow a couple of weeks ago.

I made this picture about a minute after some idiot decided to put their foot down to overtake a slow moving tractor, thereby driving through a pile of wet, slushy snow on the side of the road closest to me and spraying it all up my legs in wet clumps. Lookily I’d worn some water resistant trousers and so the impact was reduced. Most people have grey matter inside their heads. Some people have brains resembling something of a different colour unfortunately.

When we had a day of snow a couple of weeks ago, I made the effort to go out and make some photos. I had an excuse to go out as my wife had a birthday card that needed to be posted, plus it was a chance to get in my allowed exercise too.

I pondered which camera to take out, taking consideration of the fact that none of them are particularly weather-sealed. I wondered about the Zeiss folder at first, as I could easily drop that into a pocket, but the thought of big, wet flakes of snow landing on the bellows gave me pause. In the end I decided on the Holga. While I doubt it’s in any way water-sealed, it’s almost entirely plastic, so as long as I put it back in my bag between shots, I reckoned it would be ok.

The Holga gives very little control beyond zone-focusing and the ability to switch the aperture between f/8 and f/11, but that limitation also makes it very easy to use. I knew I’d keep it at the f/8 aperture setting, so it was just a matter of estimating the distance, framing the shot, and making the picture. The Holga is a genuine pleasure in this regard.

I walked around for about an hour and fired off all twelve frames on a roll of HP5+ and I think I have a decent number of keepers from the bunch. The fixed 1/100s shutter speed did a great job of capturing the movement of the falling snowflakes. As the day was heavily overcast (as you might expect during snow!) I decided to push the roll a stop during development, which I think was a good choice.

As the lockdown (and the demands of my Couch-to-5K plan) are limiting the chances to get out with the camera slightly, I’m rationing the photos a little, so they’ll be spread out over the next few days while I develop another roll of film I’ve shot and, hopefully, get out and make some more images this weekend.

I made a few photos of these flowers. They were beside the footpath I took on a walk a few of weeks ago – this one with the Holga, and a few others with my F80 and a macro lens. I’ve yet to have the F80 shots developed as I still have a couple of frames left on that roll, but I suspect they’ll look quite different to this Holga photograph which has given me a somewhat unexpected, but nontheless pleasant, low-key result.

Although I’ve titled the post (and photograph) “Daisies”, I’m not actually sure if that’s what they are. While the look of the flowers is the same, and the colours match, these are far larger than the daisies that sprout in our garden if I’ve not mowed the grass in a while. I’m sure they must be some relation though. Great Auntie Daisy perhaps? 🙂 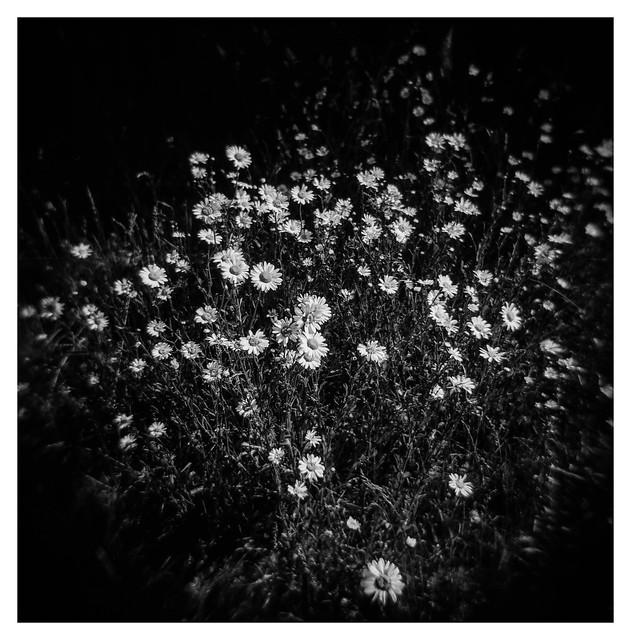