A selection of tasty looking cakes on display in a shop window. I really like the way they are lit by the sun, although somewhat less enamoured at the frosted section of the window that takes up much of the bottom-left of the image. Moving to get a better angle introduced unwanted shadows and reflections though. Such is life sometimes. 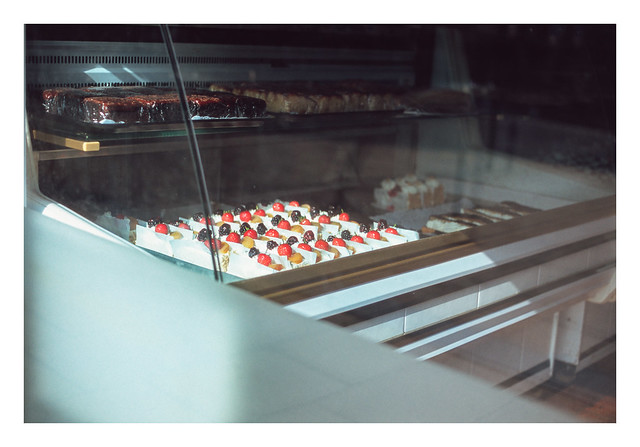 I walked past this abandoned shop while shooting the roll of expired, but satisfyingly good, Velvia 100 that I bought from eBay. The “Properties Cleared” sign was what caught my eye, the paint peeling away from the wood beneath with lovely texture. 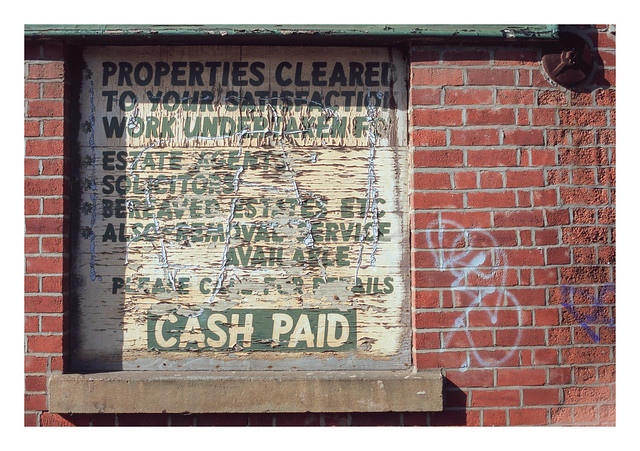 Then I noticed the shop next door, with posters pasted on the boarded up windows, so walked across the road to get a wider view of the whole scene.

It’s probably not everyone’s cup of tea, but I quite like scenes like this and find them interesting to look at. Plus, with the rate of re-development going on in this part of town it will probably not be long before the scene changes again.

I’m very pleased with the sharp rendering of this 50m lens. I already owned the F.Zuiko version, which is very nice anyay, but got the chance to pick up the Auto-S model in the 5xxxxxx seriel number range and the “made in Japan” marking, which is supposed to be the sharpest variant of the OM 50mm lens line up. For a 35mm film shot, the full size scan shows some very nice detail. 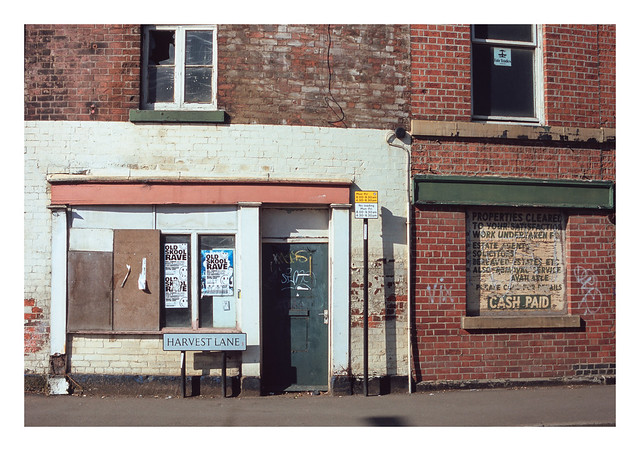 A couple of pictures depicting a mural of Jarvis Cocker, frontman of the Sheffield band Pulp, one of their biggest hits being Common People. 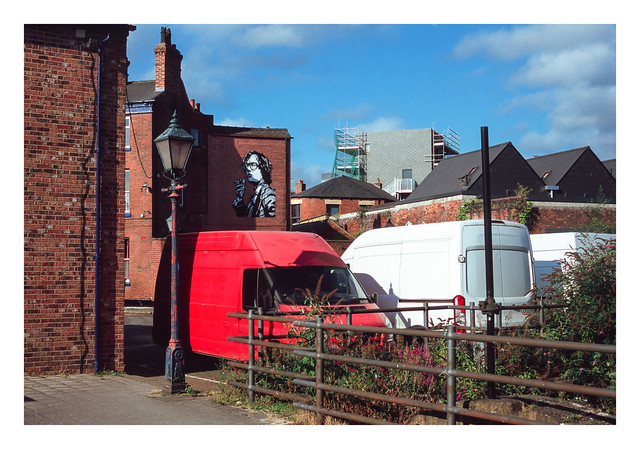 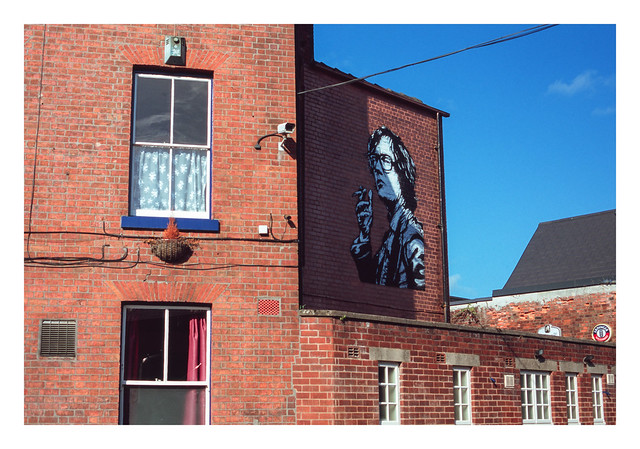 After a visit to the cinema today – the first in six months(!) – I’m not going to write much again today, just plonk down a few more of the Velvia 100 photos.

I saw Tenet, in case you’re interested. I think I should have taken some sort of pre-movie training course before going in. It’s going to take some time to get straight in my head exactly what was going on! 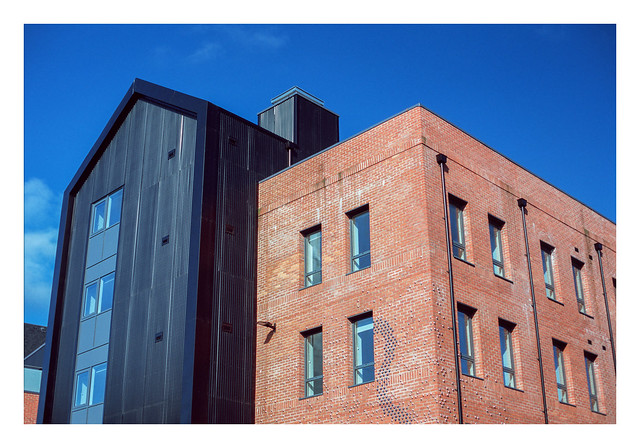 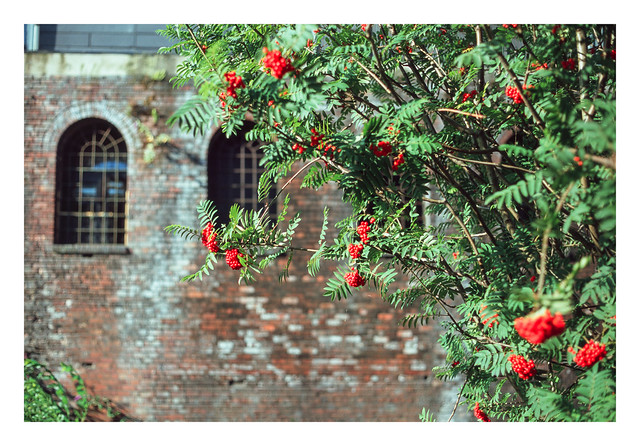 Don’t have much time tonight, so just a slightly random couple of images from the roll of Velvia 100 I shot recently. 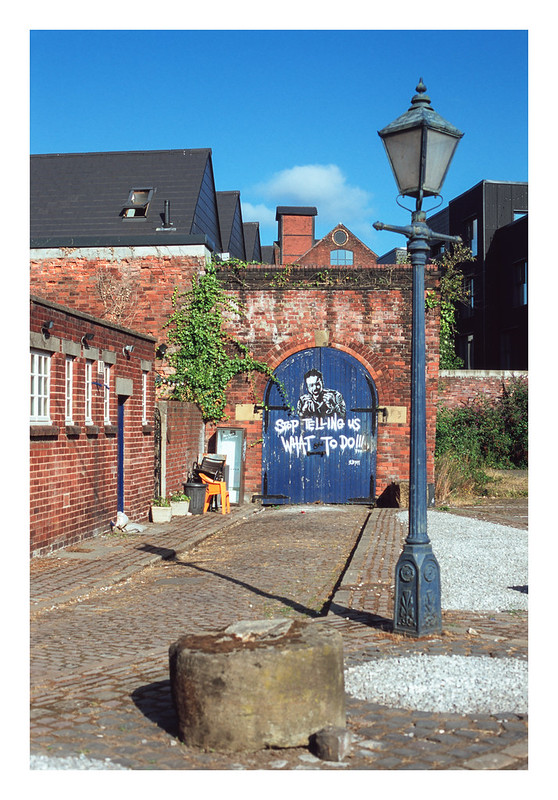 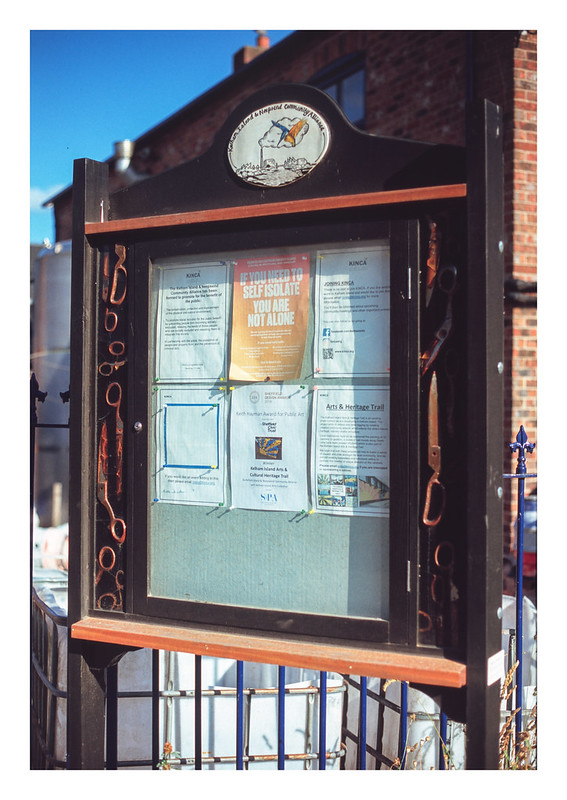 A few weeks ago I spotted someone selling a single roll of Velvia 100 on eBay. It had a single bid, but it was still at £1 (plus postage), so I waited until the last minute for a sneaky snipe and managed to buy it for the princely sum of £1.04. With postage it came to less than £4. It was listed as expired, but as it was unboxed there was no way to know how expired it might be and, for that matter, how it might have been stored. Still, for the price, I wasn’t too worried and even entertained the idea of having it cross-processed. In the end though, I decided against it, and just shot it at 80asa.

When I got the developed transparencies back I was very happy. The whole roll apperared to be well exposed (chalk up a win for the OM-2n’s meter!) and the colours practically leapt from the sheet with richly saturated tones. To be honest, I wouldn’t be surprised to find that the roll of film was fresh stock.

As with other rolls of E6 film, it took some tweaking during the scanning configuration and in Lightroom (and Photoshop) to get the scans looking like the actual transparencies, but I think it was worth the effort (and I now have the settings saved for future use – I’ve just bought four more rolls of expired Velvia 100!).

I’ll be posting a whole bunch of the results here in the coming days, but for now, here’s a photo of a car tail-light that was catching some morning sunshine. It might not be the best composition ever, but man, look at those colours! 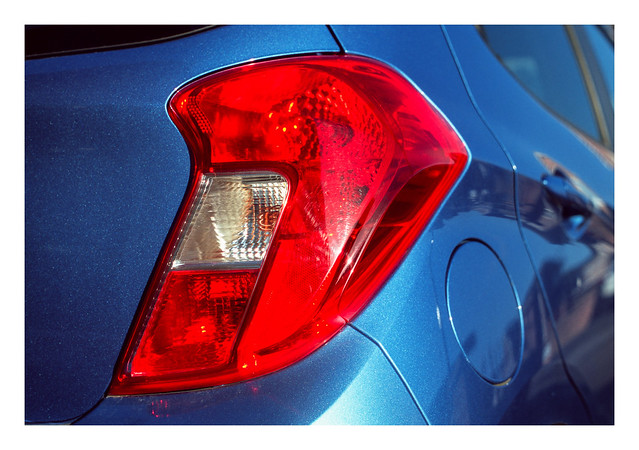 Another view of the chapel at North Wheatley, as seen in my post from last week. 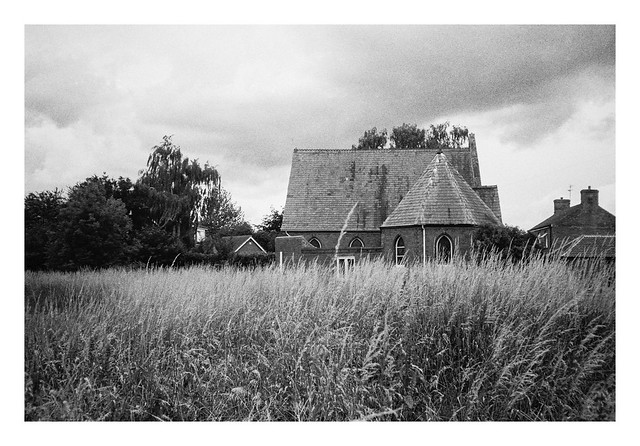 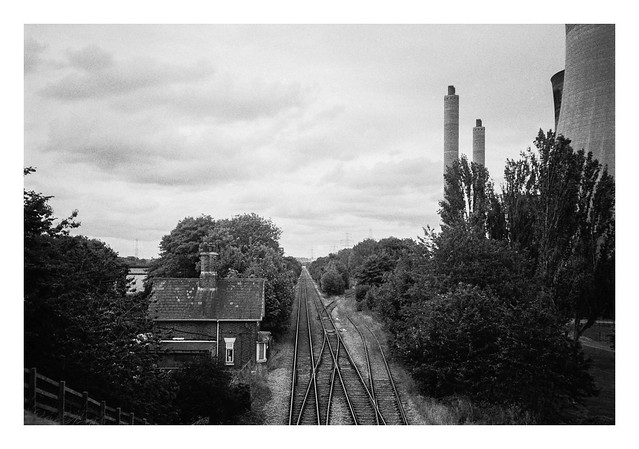 Long time subscribers of this blog will know that I enjoy making photographs of power lines. It’s a fascination that goes back to my childhood, probably borne out of watching the old Play Safe public information films that were screened on the television here in the UK warning of the dangers of overhead power cables and electrical substations. 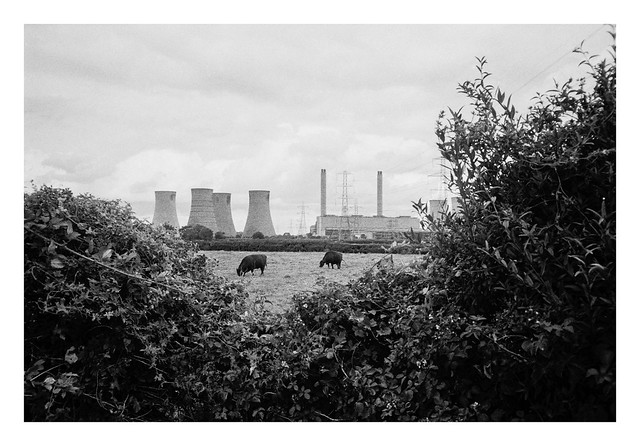 I’m not obsessed by them, and don’t go out with the purposes of “pylon spotting” or anything like that, but I find the way they traverse the landscape quite evocative and find they make for interesting photographic subjects. 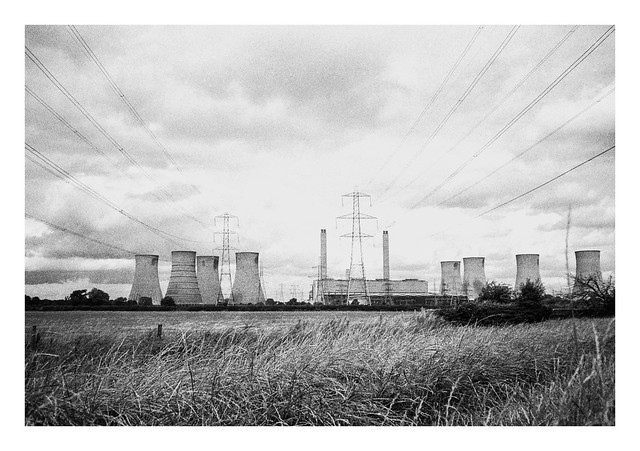 The three images presented here today feature not only pylons, but the source of their power as well in the form of power stations. After I visited North Leverton windmill, I drove towards the nearby village of Sturton-le-Steeple which is adjacent to the large West Burton power station. One of the public footpaths near the village provided a great vantage point to see the (still quite distant) facility. Another station, Cottam, is visible in the distance to the south in the final of these three photos. These, and other power stations, sit beside the River Trent from which I believe they draw water for cooling.

They are impressive structures, dominating the landscape from miles around. 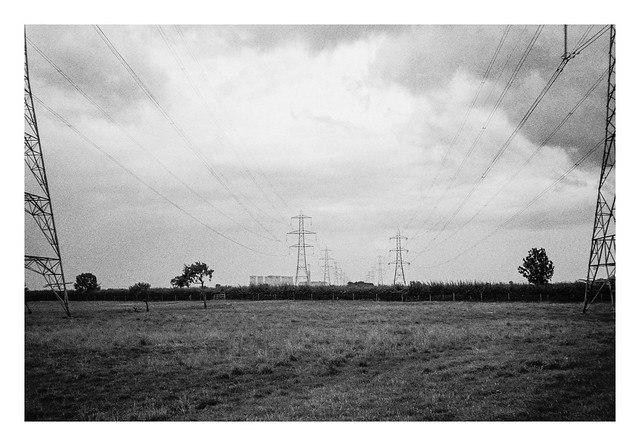 These three shots will probably mark the end of my North Leverton windmill photos for now. I still have a few more, but they’re quite similar to what I’ve already shown, so will probably stay in the archive for now.

I think these three are pretty nice pictures though (despite the over-developing problems) and the last of the trio is maybe my favourite of all the photographs I made at the location. 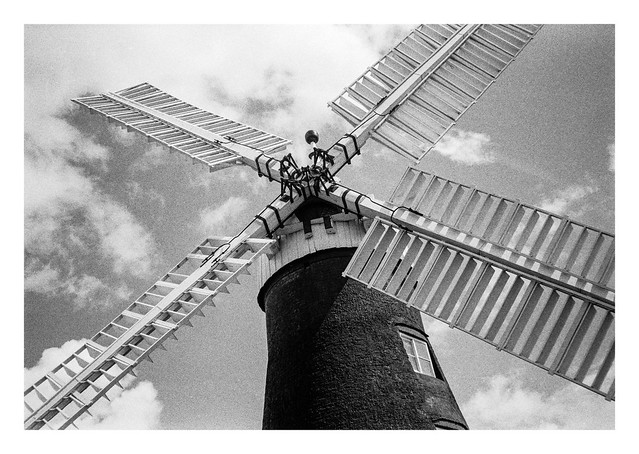 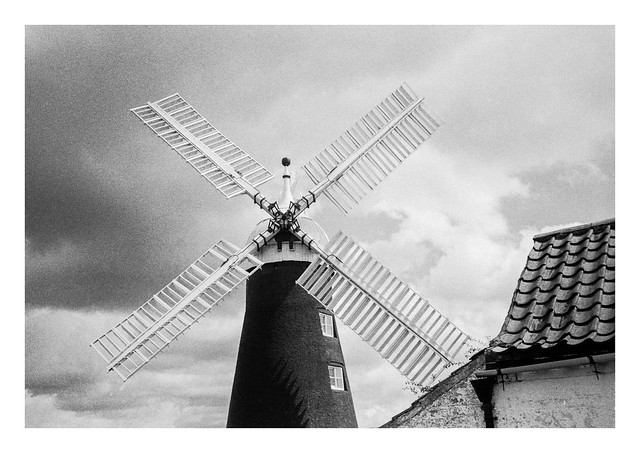 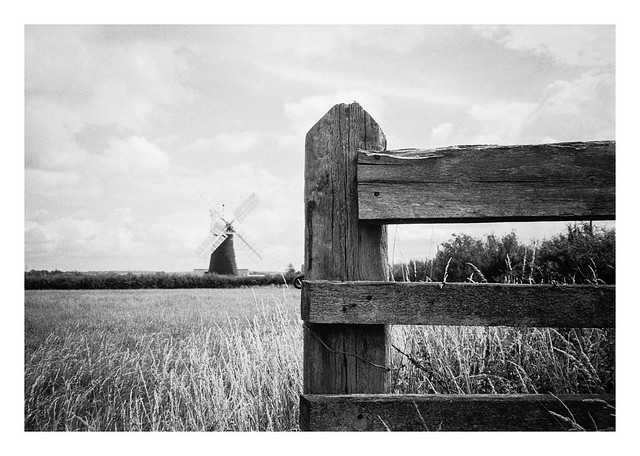