I think it’s the balloon that does it but there’s a definite cheerful look about this Fiat 600. The front of the car itself (something which resembles a face in pretty much all vehicles to a greater or lesser extent) also has a somwhat feline aspect, the chrome bars and logo resembling a nose and whiskers. Or is it just me?

A car has a face
Anthropomorphisation
Is what it’s called

More vintage rally photos, this time a couple of vintage Chevy pickup trucks. I’m no expert on such things (as I’ve pointed out more than once on this blog), and I’m British and these are American trucks to boot, but a bit of Googling has given me the models. At least I think it has. As always any expert opinions correcting my errors are gratefully received.

Anyay, the first is, I believe, A Chevrolet AK, which were produced between 1941 and 1947, placing this particular vehicle near the end of that production run.

The second truck is around three decades younger being (again, I believe) a Chevrolet Blazer. I’m tentatively dating this one to the late 70s – 1977 onwards – due to the 5×3 grid on the radiator grille. Again I could be talking out of my backside though!

Maybe I hould have asked the truck, although it has a slightly worried looking expression… 🙂

Last weekend I visited another vintage rally, this time the Smallwood Vintage Rally in Cheshire. It was a little smaller than the Astle Park event I visited a few weeks earlier and missed on some exhibits like the persiod funfair rides – there was still a funfair but it was mostly modern attractions. I doubt I would travel across the country to visit it again (hopefully the more local events will be back next year), but it was good to meet up with some fellow photographers I know via an online photography forum. As we all shoot film cameras, and as a few of us had proposed bringing folding cameras along, an informal competition was devised where we would each attempt to photograph something from the same decade as the camera.

I still had just over half-a-roll of HP5+ in my 1950s era Zeiss Mess-Ikonta, so would use that for the challenge. I also took my Yashicamat 124G on the day. As the Yashicamat if much easier to use than the Zeiss, I endeavoured to use up the partial roll in the folding camera first and completely forgot about the competition. Luckily though, one of the pictures I made was of a bubble-car that, upon later research, turned out to be an Isetta 300 manufactured and first registered in 1959, just squeaking through the competition rules. There’s no prize, and probably not even any judging, so I didn’t have anything to lose, but I’m glad I got something that fit the bill anyway.

50s bubble-car
Fifties made, like my camera
Here to save the day

We’ve had a visitor this evening, so just a quick post today. I’ve dug a picture made a couple of years ago during our trip to New York from the archive. It depicts the view north up 10th Avenue from the High Line where it crosses the junction with W 17th Street.

Another victim in the declining pub trade in the UK, the Farfield Inn stands at the western end of Neepsend Lane at the bottom of Hillfoot Road, not far from the busy route that is Penistone Road. There used to be pigeon lofts on the steep hillside along this stretch but those, like the Farfield Inn, have fallen into dereliction, their skeletal remains vaguely apparent in the brush that has grown to take their place.

“Fancy a nice pint?”
Would once have been said by those
Who visited here

A set of old iron gates on Mowbray Street in Sheffield.

Finding old cars here in the UK isn’t easy, at least outside of car shows and museums. The MOT system means that most vehicles get sent for scrap before they gain too much age; the cost of keeping them road-worthy a barrier to long-term posession. Add to this the large-scale scrappage schemes that were brought into place when the use of leaded petrol was outlawed a few decades ago and the number of older-model vehicles is low. So, when I come across something like this Ford Capri parked on a street-corner, a photograph or two is almost obligatory.

The Capri was introduced as a Eurpopean equivalent of the Mustang apparently and it, along with the mark III Ford Cortina, always give me a sense of their being our versions of the American fastbacks and muscle cars.

Lockdown limitations mean I can’t go out to all the places I’d like and, while I intend to make the most of my closer surroundings, it also means I’m going to fall back on making pictures around the house as well sometimes. Old cameras, such as my Zeiss folder, make good subjects though.

Like yesterday’s Chevy, this was photographed on my trip to Mablethorpe. While the Chevy is a permanent feature at the garage where I made the photo, this truck was just parked on the verge on a bend in the road not too far from my destination, so I pulled over and took a few quick shots. 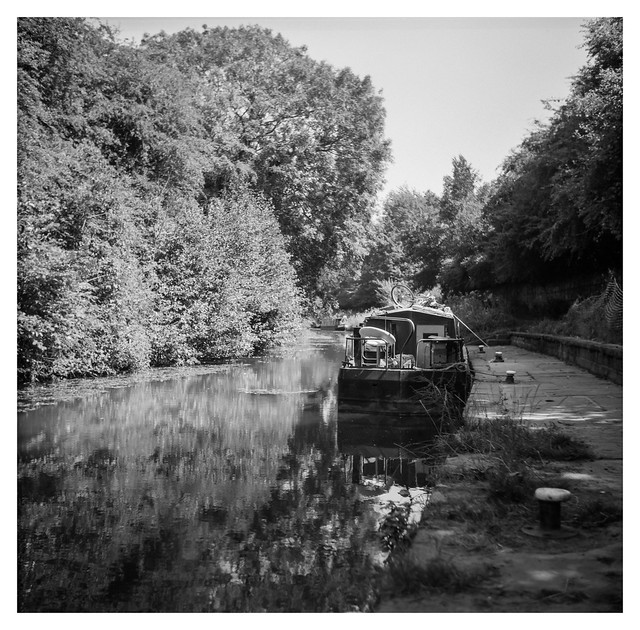