Another shot from the “getting to know you” phase with my GW690. There will be a few rolls of me getting used to the camera, I think. I developed another roll today – this one some Shanghai GP3 I shot yeterday and a few frames are quite underexposed. I think all but one can be rescued (based on my scans so far), but I’m not sure what went awry. I suspect my metering is to blame though as it was only on a few woodland shots where the exposure issues occured. I sometimes think I should bite the bullet on a proper spot meter to avoid these problems, but those things are not cheap! Anyway, some of the GP3 shots will be up here soon.

This shot from my first roll of B&W through the camera isn’t too bad I don’t think – it’s pretty contrasty, but the scene was a mixture of shadowed areas punctuated by bright highlights, so it’s to be expected.

Globe Works is a former cutlery factory situated in the Shalesmoor area of sheffield.

The building has a Grade II listed status and was renovated in the 1980s. The building is now home to a number of businesses, creative endeavours, and start-ups.

The works dates back to 1824 and was one of the largest specialist steel-making facilities in the world at the time, and possibly the first ever custom-built cutlery factory. As well as cutlery, they produced scissors, tools, and even specialised in the manufacture of Bowie knives for the American market.

The building has seen off a number of threats through its history, including a bombing by union activists in 1843, an attempt to remove the listed status by the town planning committee so it could be bulldozed to make way for a road, and, most recently – in 1978 – an arson attack that left the site derelict until the restoration work took place in the 1980s.

Long may it last.

This is the corner of The Fat Cat, a pub in Sheffield’s Kelham Island area – somewhere I seem to make a lot of photographs, despite living nowhere near the the place.

The Fat Cat dates back to the Victorian era, being built in 1850. As a result of it’s age, and it’s position close to the course of the River Don, it was affected by the flood in 1864 when Dale Dyke resevoir collapsed catastrophically, killing over 240 people as the water descended it’s course to the centre of the city.

One-hundred-and-forty-three years later the pub was once again engulfed by flood water, this time caused by torrential rain. Three people lost their lives in this event.

The pub has two markers painted on it’s wall denoting the water level of both floods.

As mentioned yesterday, I spotted this chap sitting outside his chalet with three friends, so I asked if I could make a couple of pictures. The dogs didn’t seem too keen, snarling at me when I pointed the camera in their direction, but I got the shots.

Another set of beach-chalet photos today, this time in black and white. Cery few of these were occupied on the day of my visit, which is not surprising given we are now into autumn (it was mid-september when these shots were taken). There were a few people still making use of them though, including a chap sat enjoying the sea air with three of his dogs – some picture of them to come shortly.

I have vague memories of us hiring one of the chalets (one of the ones with windows) when I was a young boy – possibly my parents and my grandparents were present on that occasion, although the recollection is vague.

While the structures are pretty basic in design, they had power and water, so it was possible to make cups of tea and other refreshments, as well as being a useful shelter from the elements (whether hot sun or, this being the UK, pouring rain!) and somewhere to store the accutrements of a day at the beach without having to lug it around everywhere all day. They also had a set of curtains, so you had the luxury of being able to change out of wet, sandy swimming costumes and into dry, clean clothes without the risky maneouvering that would be required when attempting to do the same thing on the beach wrapped in just a towel!

They can look a little grim when photographed in monochrome in cloudy conditions, but when they’re all occupied by familys enjoying the warm sunshine in the height of the summer, they have a certain British charm. It always amazes me just how much chalets and beach huts can cost at some of the more up-market resorts around the country, where they can be priced at tens-of-thousands of pounds to buy outright!

On the promanade above the beach at Mablethorpe sits this odd little structure. It houses a camera obscura. It has never been open when I’ve visited, unfortunately.

The past few years that I have visited Mablethorpe in September, the funfair has been closed. Whether this is because the customers who would partake of the larger rides are all back in school by this time, or maybe they only open at the weekends – this year I visited on a Friday whereas it’s been midweek most other times. Or perhaps, in this pandemic year, they are staying open for longer, seeking to eke out whatever income they can following a summer season that will have been heavily affected by the lockdown at its beginning, and then – to some extent at least – smaller numbers of visitors than usual (although it will be interesting to see if the loss of foreign trips has resulted in larget numbers of tourists, perhaps balancing things a little). Whatever the case, it’s hard not to feel sorry for the businesses and workers who rely on the summer season at resorts around the country who will have seen their incomes affected. I hope they are able to survive.

Today’s photos were made in the still-open funfair. There were few other visitors to be seen, although it was still early in the day.

People walk on the wide, sandy beach where it stretches northwards from Mablethorpe towards Saltfleet, Donna Nook, and then on to Cleethorpes, Grimsby and the Humber estuary beyond.

I’ve spotted what might be light leaks on a few frames from this roll. Might need to give the OM-2n a once over – I suspect it has no light seals at all at present!

I mentioned my photos of North Leverton windmill a couple of days ago, so here are a few of them 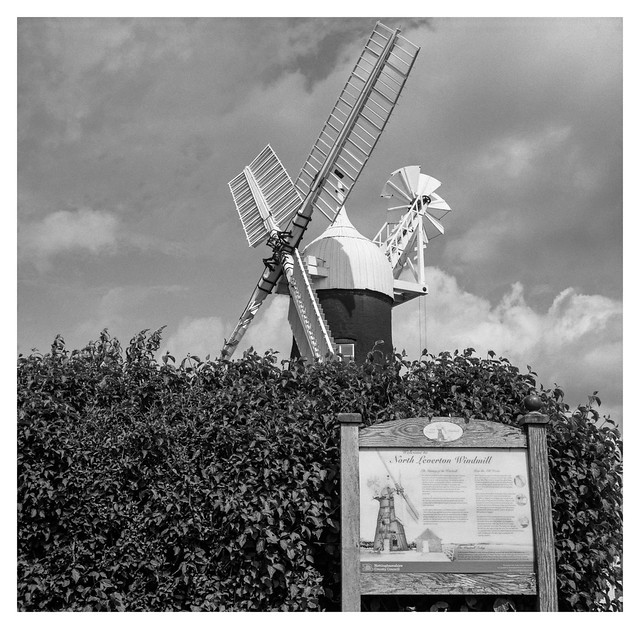 The mill was built in 1813 by a collective of local farmers to grind their corn. It was also agreed that the mill would grind corn from other farmers and “industrious poor persons” for an agreed fee. 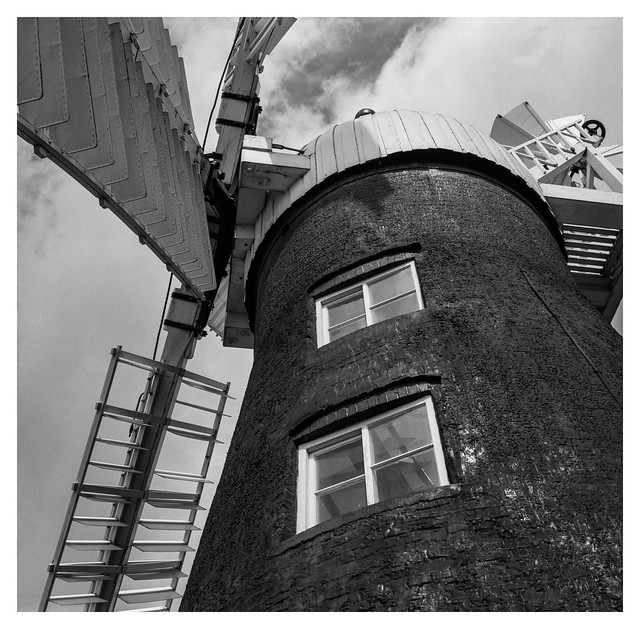 The windmill is completely without electrical power, relying on the wind to operate – although there are a set of engine stones for use when the wind is too low to turn the sails. 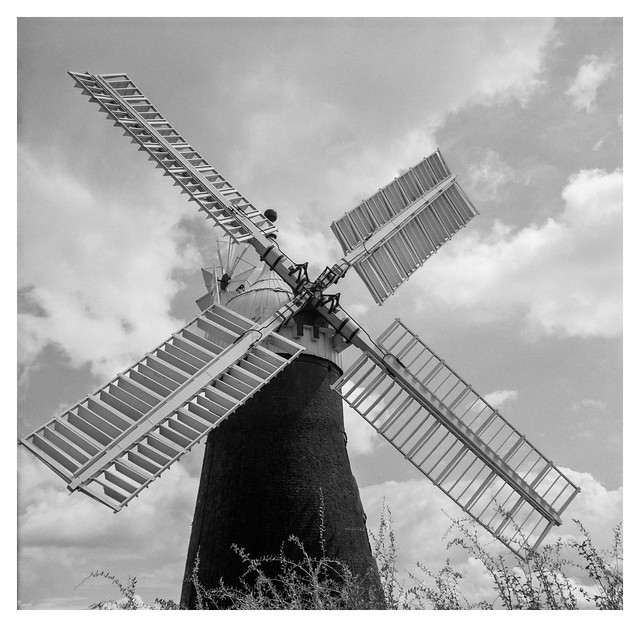 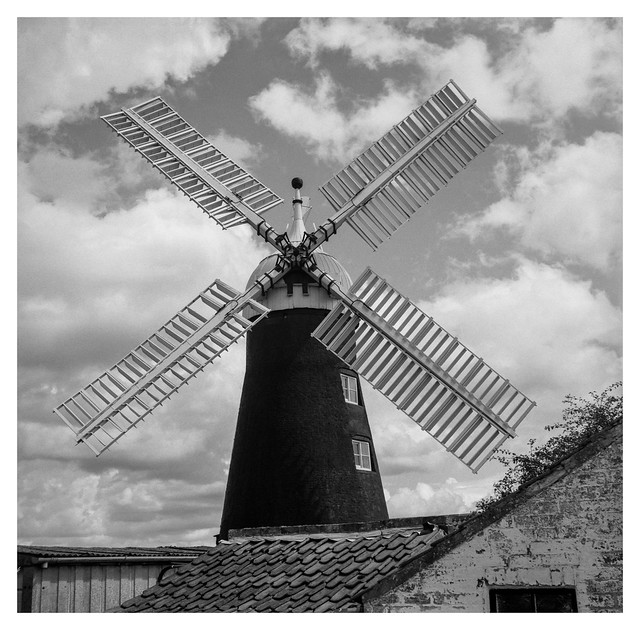 I had a couple of cameras with me on the day – my Zeiss Mess-Ikonta 524/16 & my Canon Sure Shot Supreme (plus my phone). Because of the hedges and fences that surround the mill, it was sometimes difficult to frame shots with the fixed focal length lenses of both cameras. Ironically in the next shot, I could have used a longer lens perhaps. 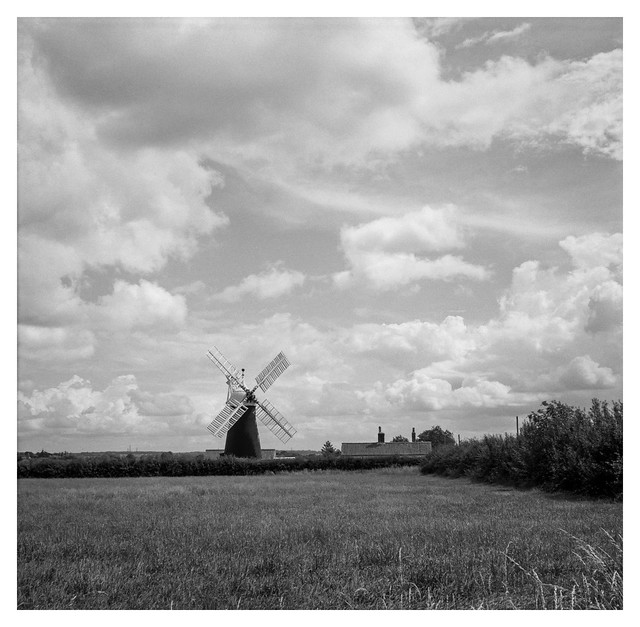 The final shot is of the cottage beside the mill, which had a group of chickens roaming about the place – presumably the source of the eggs in the photo I posted the other day. 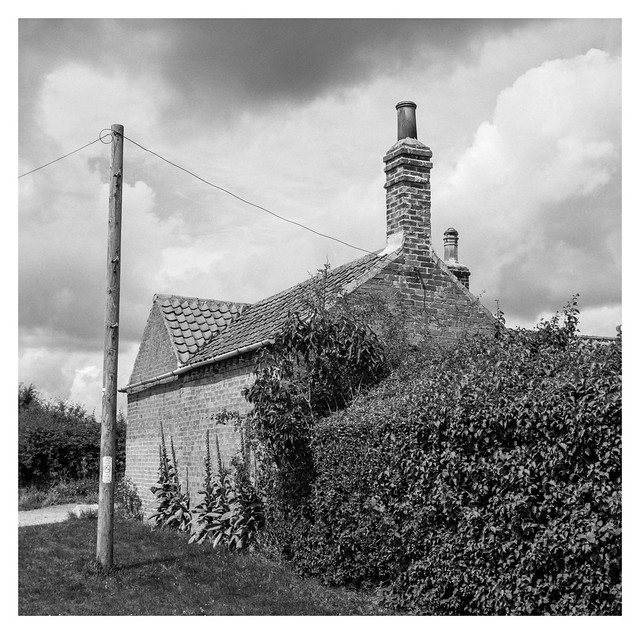 …Clearly the chicken, because I posted a picture of her yesterday! 😀

This self-service dresser full of fresh eggs was in the driveway of North Leverton Windmill, which I visited three weeks ago. Time really flies! – it only feels like last weekend that I made the trip!

There will be a bunch of photos of the windmill over the coming days and weeks as I made several photos on both my Zeiss and my Sure Shot Supreme.

Who knew there was a national egg-box shortage! 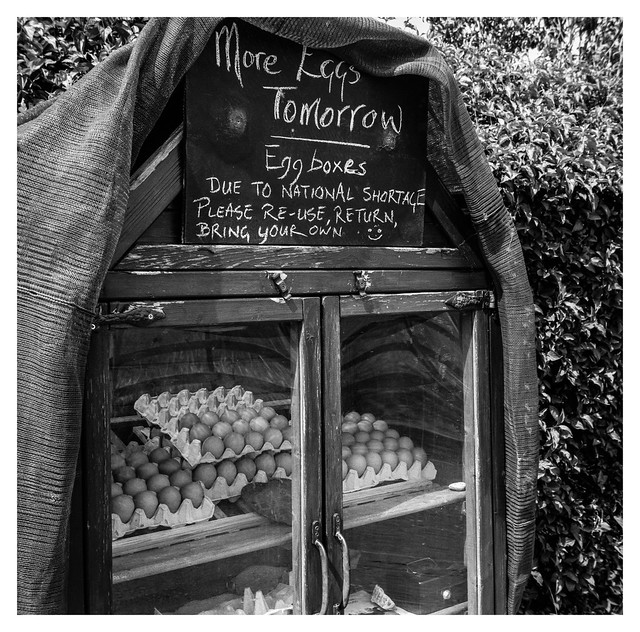