I’d planned on a long walk this morning as the weather forecast was for a clear, frosty morning. As usual though, the weather forecast was bullsh*t, and the sky was grey cloud as far as the eye could see with not a hint of frost. There wasn’t even any mist or haze that might have made it worthwhile in photograpy terms. I felt dejected and the thought of a walk where I would make lacklustre, for the sake of it, photos didn’t really appeal so I took the idea off the table. I had a number of other things to do indoors anyway.

The walk will wait for another day, although – as I’m back at work on Monday – it will have to be at another weekend as it’s much too long a distance to make during a lunch-break or something. I think part of my not going out is also lockdown blues. Even though there is light at the end of the tunnel, that’s still several weeks away and the thought of wandering the same places over and over is becoming less attractive by the day. Just the chance of driving a few miles will allow me to get a bit of an inspirational re-charge and the freedom to do so can’t come soon enough.

A shot that might have been better in colour had I had the opportunity. I think the blue sky and the sunlit brown of the dead bracken at the bottom of the frame would have worked nicely together. I still quite like it in mono though. The branches frame the pylon well.

I’m tempted to start throwing in the lyrics of the Grandmaster Flash classic. 🙂

Today’s photo is one that I’ve made before, from almost exactly the same spot, using the same camera and film. Apart from the fact that I pushed this roll by a stop, the technicalities of the picture are almost identical. The only real difference is the conditions when the images where made. I’ve published the original picture before here, but will add it to this post too so they can both be easily compared.

Two pictures the same
But seperated by time
Such differences

First the new image, made a couple of weeks ago:

See, I told you I ‘ve made a number of shots at this location, so look forward to more exciting skip photos in the coming days! I’m sure you can hadly wait… 🙂

I was struck by just how much growth has occured in this small marshy area since the last time I walked through during the summer. Back then the area had been landscaped to produce a number of small ponds from the previous patch of marshy reedbeds. It was mostly bare earth with some patches of reeds. Now it is in full growth – so much so that it was a little difficult to spot the path that I’d followed previously. Hopefully it will be a haven for wildlife, especially amphibians.

A couple of photographs serving as a direct follow on from yesterday’s pictures of the flyover – the first taken when I was stood almost beneath it, the second featuring it as a subject.

I wasn’t sure the second would work as it was shot with the sun directly in frame. While there’s a little flaring, the Telemax’s lens has coped admirably though.

Two more photographs of the flyover that spans the Rother Valley not far from where I live. I posted a couple of medium format shots of the same location about a week ago here.

The first shows a very similar viewpoint as the previously shot image in the linked post, albeit made on a different day and with misty conditions.

The second is taken from the western end of the field where it reaches the river and looking back to the east. I think this one works much better compositionally as the eye is led along the shaft of sunlight from bottom left, up the bridge support, along the curve of the road deck, and then – thanks to a lucky shadow – down into the field and to the electricity pylon. I’m really happy with this one. 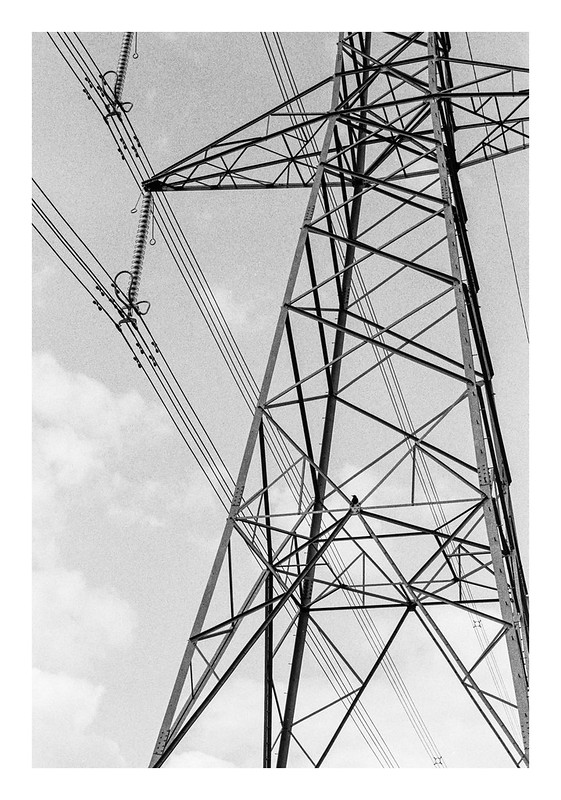 A slightly larger selection of photographs today made up of most of my remaining pandemic-related pictures. I have a few others, but I’m not sure if they’re worth posting or not.

As retail opens up and the lockdown measures ease, there might be opportunities to make more photographs relating to the situation (and if the whole thing goes belly-up, there might be a whole bunch of new lockdown pictures too!), but for now this is the last of what I have to show.

The photos were made over three seperate outings, using two different cameras (and film stocks). The first three follow on directly from the trig point images I posted yesterday, being made on the same walk. The first shows the KFC restaurant at the local retail park. This place would normally be full of cars at the time I walked past, but on this day is was completely deserted. I think it may have re-opened for drive-through sales now but on this day it was shut. The McDonald’s to the right of the image was similarly closed (although it was part way through renovation as the lockdown took effect, so won’t reopen until that is complete anyway). There’s a Pizza Hut off the edge of the frame to the left too, but that was also closed. Probably good for people’s cardiovascular systems though. 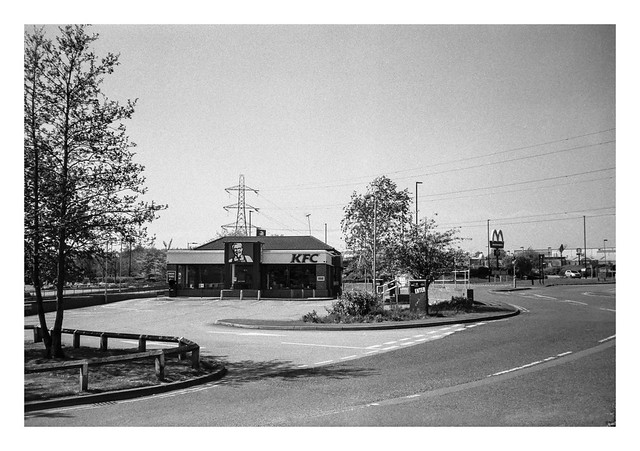 After walking past the KFC I dropped down to the shopping mall to get some items from Sainsbury’s. The usual socially-distanced queue was in effect and took me past these signs on the store window close to the entrance. The rightmost sign is for the Big Night In, a television special made by the BBC where the majority of the performances came from the act’s own homes. You can just make out the ghostly reflections of other socially-distanced shoppers in the window too. 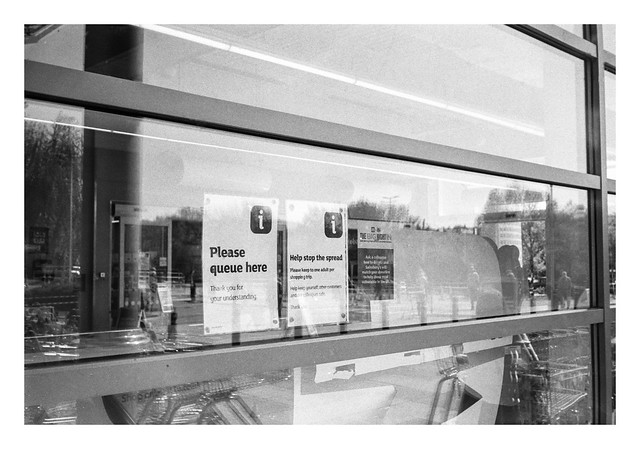 Walking home I passed by a local pub restaurant, closed up since before the lockdown started. Like many similar venues, the noticeboard features a thank you message to NHS and other key workers. 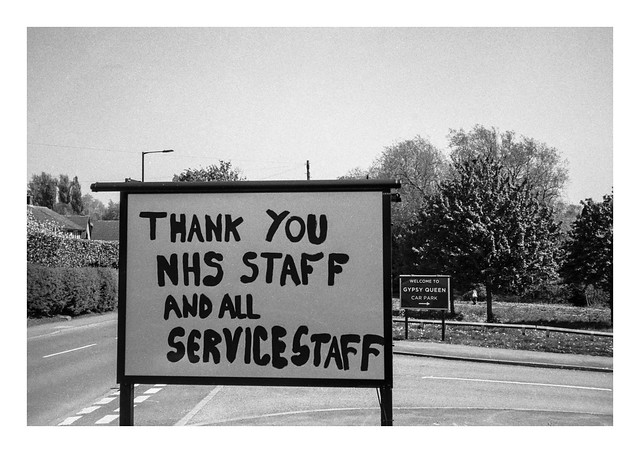 This next photo was taken from practically the same spot as the second picture in this sequence, but on a different day. It shows the supermarket’s promotion of technology to make it easier for people to avoid contact with others while in the store. 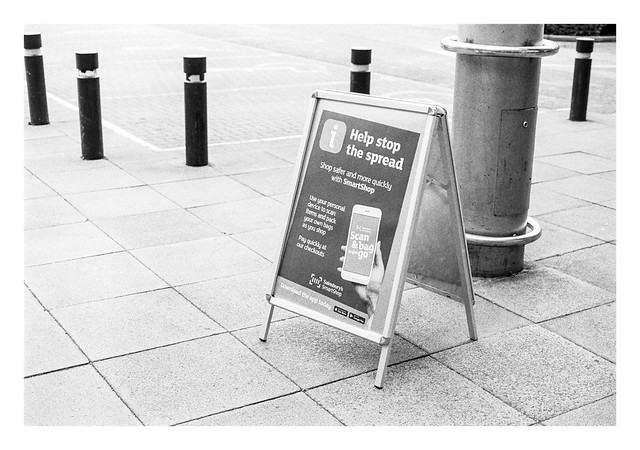 And finally, this is one of the children’s play areas at Rother Valley Country Park, the gates taped up, warning notices applied, and fastened shut with plastic cable ties. 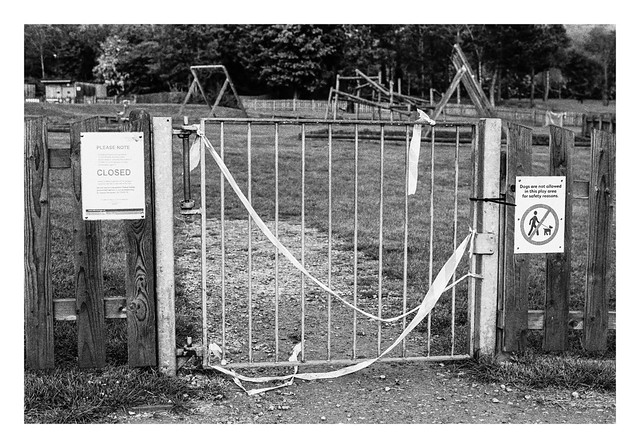 Today has been a somwhat uneventful day. I haven’t left the house, and the only photography-related activity has been reading my Portraits of America book, reading some blogs, and loading a roll of Fomapan 100 into my Bronica ETRSi (but not, so far at least, making any photographs with it). I did also upload a couple more shots to Flickr from the roll of Hp5+ I developed on Friday, one of which you can see in this post.

Yesterday, while not exactly exciting, was more eventful. My wife needed to pick up some things from the hospital and, as she was unsure if she’d be able to find a parking space outside the ward (and would otherwise have a lengthy walk), asked if I would drive her there. This was a reason for me to both drive the car – something I’ve barely done in over a month – and also, because we took our small car (which has been sat on the drive for weeks), give it a run to get some charge in the battery and get some movement in it’s parts. While hardly the trip of a lifetime, it was nice to be able to venture further from home for once.

Then, yesterday afternoon, I decided to combine a walk with picking up some things my wife had been been unable to buy during the weekly supermarket shop. I decided to get some decent exercise by taking a circuitous route around the area, looping around to the shopping centre, and then back home. At around 3.5 miles it wasn’t a really long walk, but I kept up a brisk pace throughout and got some good fresh air and exercise.

I also had the Sure Shot Telemax in my cargo-pants’ pocket, and managed to finish the roll of Delta 400 that it contained. Just a few snapshots as I walked, but maybe something worth a second look when I get around to developing them. The roll ended rather abruptly at frame #32 because I think the camera’s frame-counter has developed a fault – it sometimes jumps back to a lower number, or (in this case) miscounts how may shots have been taken. It’s done it before, but I don’t think it’s actually lost any images, still producing the expected 36 or 37 photos.

Today’s photo has both railway lines and power lines, and is the sort of composition that the Holga seems to eat up for lunch. 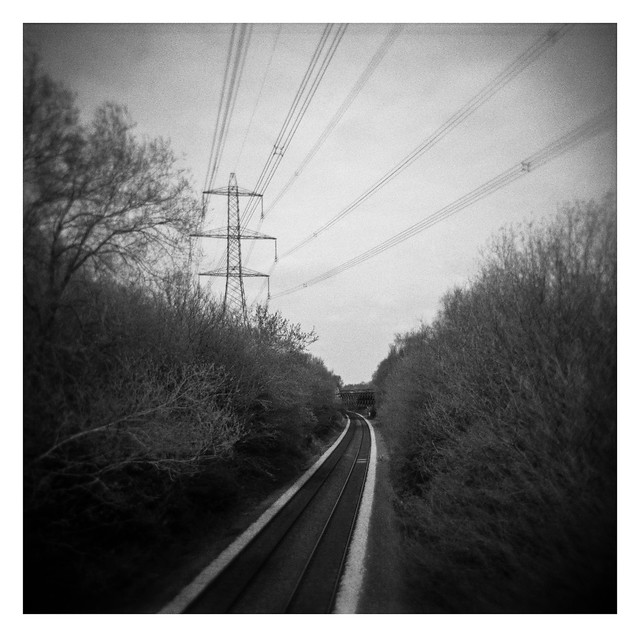