I crunched through the dry, brown heather to get this cluster of rocks in the right place to frame this landscape photo of the moors looking over to Higger Tor, which can be seen in the distance at centre-left. It was approaching lunchtime when I made this picture – long after the golden-hour had passed – but there’s something to be said for capturing images at this time of day. It’s often the time and light when people are out and about and so depicts scenes as many of us will usually see them

A blossom laden tree and stone built house make for an attractive scene. Although 6×4.5 is pretty small where medium format film sizes are concerned, I’m always happy with the quality of the photographs produced by the Bronica ETRSi.

This is the track that leads to Bolehills Quarry. On the left, just beyond the tree, you can see a stockpile of abandoned millstones. Presumably this is where they were stored before being transported elsewhere, and here they remain since the market fell away, gathering coats of moss and lichen and providing something nice to look at as you pass by.

Abandoned millstones
Lining the route to Bolehills
In the spring sunshine

Bolehills Quarry, up above Padley Gorge, is carpeted with lush grass and beautiful silver birch trees. It’s a location that likely suits pretty much any type of conditions. The trees cast stark shadows in bright light and look mysterious in mist. These two shots were made around 9-10am while the sun was still striking long shadows.

I scanned these using EpsonScan, which is not something I normally do with colour photos as I’ve been less than successful at getting nice colours from the results in the past. This time though, I think it’s worked very well. Maybe not perfect – I doubt I’ll ever be sure a colour scan is “perfect” – but still a result I’m very happy with.

This morning I decided to get up early and go make some photographs. A lot of trees are starting to turn and there are some gorgeous colours to be seen in their foliage – colours that would look extra nice in the light of an early morning sun. The weather forecasts over the past few days – right up to when I went to bed last night in fact – had stated that it would be cloudless first thing today, with duller weather coming later, and the dew point indicated a chance of mist. When I woke up, I took a look out the window to see how it looked and, sure enough, the skies were free of cloud to a degree, although there was still quite a lot about. So I got dressed, grabbed my camera and tripod, and had a quick breakfast. When I stepped out of the front door twenty minutes later the sky was covered with cloud from horizon to horizon.

I briefly considered just going back inside, getting undressed again, and getting back into the warm bed. But I didn’t. In for a penny, in for a pound as the saying goes and, even without the clear skies, I still thought there might be a chance of mist in the river valley where I planned to go.

There was no mist.

I have several weather apps on my phone. None of them seems to be any better at correctly forecasting the weather than a pine-cone or bit of dry seaweed hung outside the door. One of them once told me that the location where I was experiencing pouring rain at that very moment was actually in full sunshine. If they can’t tell you what the weather is doing in the present, what hope do they have at predicting the future? Anyway, rant over.

Deciding against making any photos in the dull, unflattering light – no point wasting film – I decided instead to drive to a nearby car-boot sale. It would be the first time I’ve visited a boot sale this year. Partly due to lockdown, but also because I’ve just had other things to do at weekends. I always have a slight frisson of expectation when I visit these places. The dream of picking up a Leica or a Hassleblad for next to nothing, that sort of thing. The dream didn’t come true today, sadly, but I did find another film camera, the only one I saw on all the stalls. It looked in nice condition – boxed with the manual – and the seller only wanted £1 for it, so I decided to rescue it.

It’s not a camera I wanted or needed at all – it’s a fairly nondescript 35mm compact – a Fujifilm DL-270 Zoom Super (catchy name, eh?), with a 35-70mm zoom that starts at a slow-ish f/5.6 and goes downhill from there as you zoom in, granting f/11.2 at the long end. It look s like the sort of camera that someone who wanted to take pictures but lacked any interest in photography would have bought in the 90s. But, for the low price, I’ll give it a go and see how it performs (maybe on a bright day though!). The last camera of this ilk that I used, a Samsung Fino, made surprisingly sharp pictures. Hopefully Fujifilm stuck a decent (if slow) lens inside.

As a bonus, there was a boxed roll of Fuji C200 in a box on the same stall, and the seller kindly threw it in with the camera. I expected it to be expired by fifteen years or something, but it only expired in July this year. Even if the camera is a bust, I still got a bargain roll of pretty fresh film! On top of that, there’s also a roll already in the camera. When I stuck a battery in when I got home (the included battery being dead), it powered up and showed frame 1 on the LCD. This probably means one of three things:

Whatever the case, I’ll shoot the roll that’s inside and then, depending how I feel, maybe another. After that, unless it stuns me with the results, I’ll likely pass it on to someone else. But at least it will live on.

And finally, nothing to do with the rest of the post, here’s a nice colourful photo I made with the Yashica Mat the other week…

A couple of photographs taken within 50-feet or so of one another, looking in different directions (roughly north-east and north-west), but quite similar in look and feel thanks to the tall buildings in this part of town and the way they have reflected the clear blue of the sky. They both share the theme of reflections too. 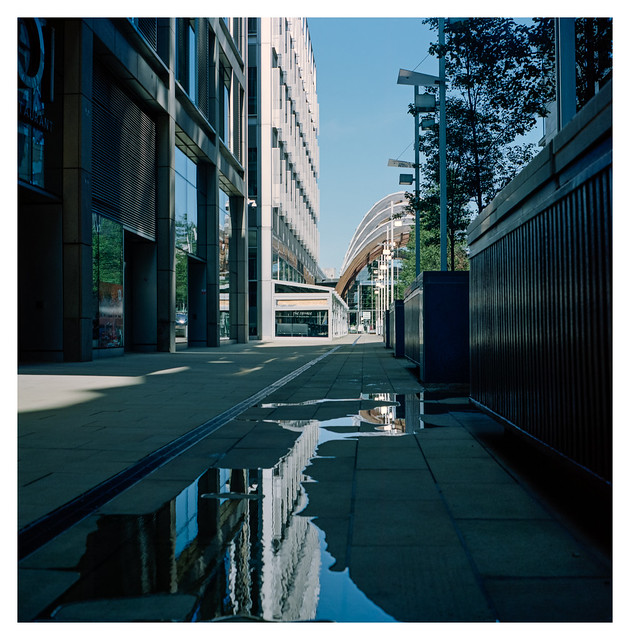 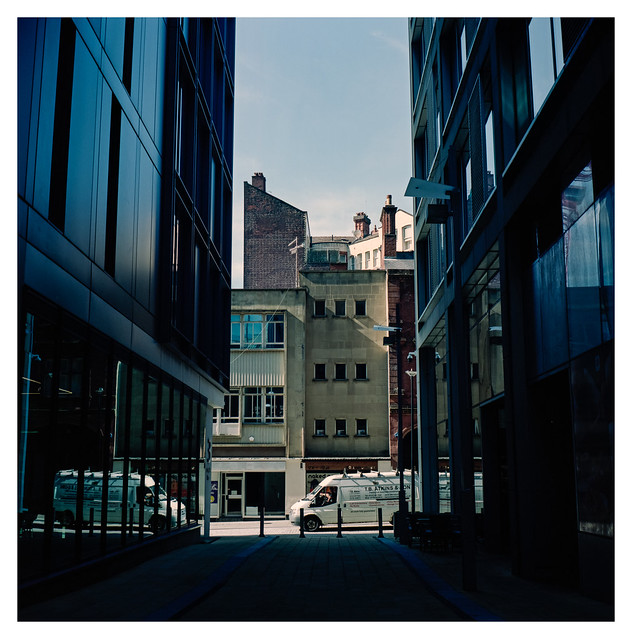 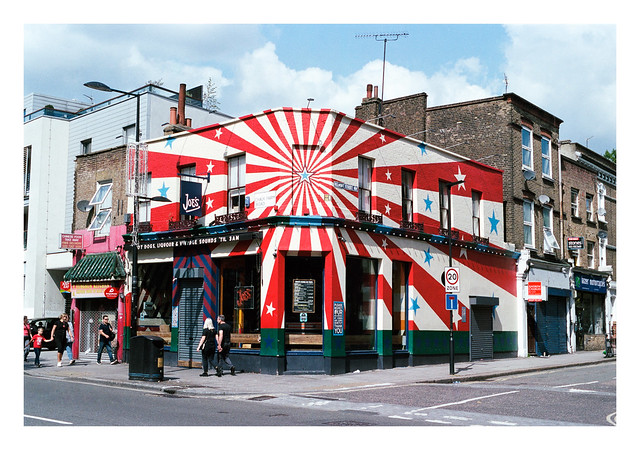 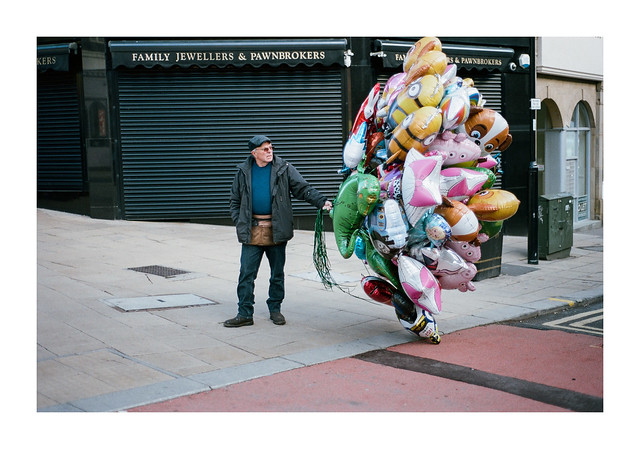 Instead of a boring limo, why not hire a charming VW Camper for your wedding needs? 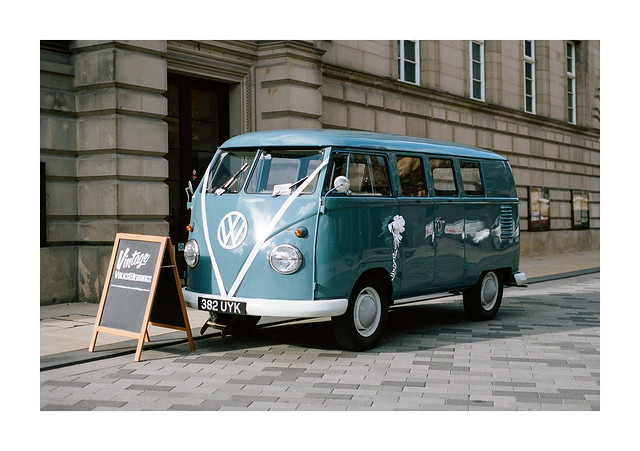 Just one of those random subjects I choose to photograph sometimes. 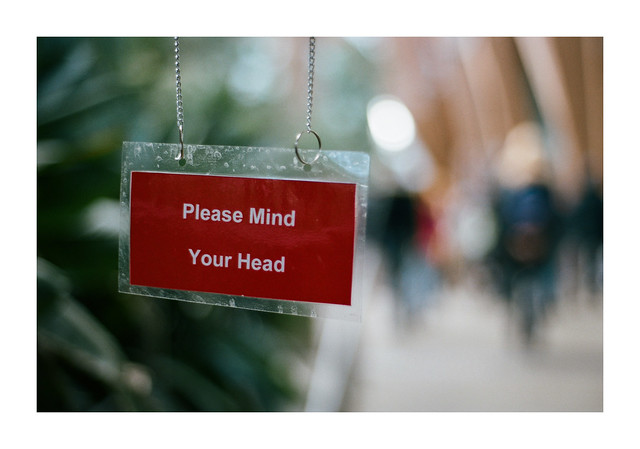