After developing some film this morning and then an afternoon spent putting the Christmas decorations up (a little earlier than usual this year) I’m ready to veg out (in the festive living room:)) and so am just going to bung up a load of photos from a visit to the Peak District a few weeks ago for today’s post.

A quick post as I’ll be out all day and probably won’t have time to post anything when I get home.

Here are pictures of a couple of cobbled streets on overcast days, the first in Whitby, the other in Staithes.

There always seems to be a dinstictive look to houses in seaside towns. Not so much the style – which can vary – but a general air about them. A lot of them have rendered walls, such as the ones in the picture today (perhaps this gives greater protection against the sea air?) and you can often see little stains of rust where metal objects on the walls have been corroded by the salt and stained the walls below them, although not the case here. But even where walls are not rendered, there still seems to be something about the dwellings that instantly says “seaside town”.

I suspect, like many people, I was pleasantly surprised when Kodak recently revealed the re-introduction of it’s Kodak Gold emulsion in 120 format. I’d long wished that Kodak or Fuji might relaese one of their consumer emulsions in this format, so was glad to hear of its imminent release. I was also pleased to see that it would retail for less than it’s other colour films although, given the skyrocketing cost of C41 at present, it still sells for more than Ektar did not so long ago. Nevertheless, I decided to treat myself to a pack of five rolls.

My pack of film arrived in the mail at the start of the month and, last weekend, on a sunny spring morning, I decided to go out and see what I might photograph on a roll of it. I didn’t want to go on a big day out, so decided to head to the botanical gardens in Sheffield with the intent of maybe getting some pictures of the plants in the glasshouse.

After arriving I took a picture of one of the university buildings on the street where I parked my car. It’s not the best picture, but the colours caught my eye.

The next image was of a house with a cuppola near the entrance to the botanical gardens. This shot I’m really happy with. I like how the cuppola is framed nicely with the tree branches, and also the conifer is similarly framed on the right of the image. Plus the light was great.

It was at this point that I discovered that the gardens don’t open until 10am, so I had some time to kill (it was only around 9:20am when I got there). So I decided to walk up the street beside the park and then head over towards Endcliffe Park instead. On this street I noticed a vintage motorcycle and got another photo. I’d have liked to open up the aperture to get more separation of the bike from the background but, even with relatively slow 200asa film, the light was too bright and as the Yashicamat has a maximum shutter speed of 1/500sec, I had to stop it down further to avoid overexposure. It’s a pity about the bins, but what can you do?

Just up the road from the bike was this house with a brightly painted door that I liked the look of.

Close to Hunter’s Bar roundabout, just below Endcliffe Park, is a row of attractive old houses largely hidden from view by large shrubs, but I was able to get a nice angle on them. Again, the light was lovely, and I like the church tower that peeks up behind them in the background.

Just inside the park is this lovely house. It’s the arts-and-crafts style park pavilion and lodge building, dating to 1891. The building has Grade II listing status.

I took a walk up Rustlings Road which runs beside the park – making several photos along the way with my XA3 that I had tucked away in my jacket pocket – before then wandering back through the park itself along the footpath. There are a couple of millponds here – evidence of the area’s industrial past – where I remember catching small fish in a net on a day out with my nan back when I was little. The ponds are filled with water from Porter Brook which runs down the valley before joining the River Sheaf in the city centre close to the railway station. Near the bottom of the park, where the large playing field is, sits a cafe. It was very busy on this sunny morning with many people sitting outside in the seating area across the path.

And finally, after leaving the park and walking up Brocco Bank, I finally arrived at my original intended destination – the botanical gardens. By this time I only had a single frame of the Kodak Gold remaining to be shot, and I made this picture of the gatehouse.

All the pictures were scanned on my Epson V550 flatbed using Vuescan to create RAW DNG files. These were then converted to positives with Negative Lab Pro. I’m still getting the hang of NLP, but I’ve got a group of settings that seem to be producing quite nice results for Kodak Gold (although I do still tweak them further in Lightroom afterwards).

I’m happy with the results I got from this first roll of Gold in 120 format and look forward to shooting more of it.

Yesterday’s post showed the round house at Wentworth in its entirety. Today’s picture is a closer perspective with the cottage beside it in full view. Part of me prefers this shot – there’s a lot of detail tucked away and it was probably the two busts beside the front door that drew me as much as the structure itself.

The GW690 is something of a beast of a camera – it didn’t get the nickname of The Texas Leica because it’s compact, that’s for sure. As a result it canbe quite an awkward camera to use, despite its otherwise simple set of controls. I find it quite difficult to hold in portrait orientation and most of my missed shots, where there has been a degree of camera shake, have been when taking pictures this way. The camera has a second shutter release button on the front of the body to aid in taking portrait format photos, but I still tend to generate more of a wobble when using it even like this.

Thankfully the portrait oriented pictures I took on this day in Wentworth have all come out ok with the exception of one.

I’ve had a long day full of phonecalls. Almost back-to-back all day long with no more than half-an-hour between each. As a result I feel like I’ve achieved little (even though the calls all served a purpose). To make it worse I’ve had a low-grade headache since I got up and, for a worrying moment, almost felt I was going to drop off to sleep during one of the calls!

But the working day has concluded now and it’s time to think of something to post on my blog which, today, is a small set of photographs of homes on a steep hill in Knaresborough.

In 1975 an exhibition named New Topographics: Photographs of a Man-Altered Landscape was held in the International Museum of Photography in New York City. It featured works by a number of photographers – the Americans Robert Adams, Lewis Baltz, Joe Deal, Frank Gohlke, Nicholas Nixon, John Schott, Stephen Shore, and Henry Wessel, Jr., and the German couple Bernd and Hilla Becher. Each photographer exhibited 10 photographs.

New Topographics presented a different way of photographing landscapes, eschewing the traditional natural environments and instead presenting images of scenes with a clear human footprint, such as industry, suburbia, gas stations, parking lots and the like.

While I only came across the term in recent years, and at no point set out to be a “new topographer”, it’s clear that many of my photographs fall into the style. I’ve no doubt found influence in the works of photographers who were in turn influenced by the works of the artists presented in the original exhibition, although of the ten, I only have photobooks by Stephen Shore (though there are undoubtedly works by the others collected in other books in my collection).

It’s a style that doesn’t appeal to all. For many, the subjects of such photographs are ruinous blots on the landscape, detracting and imposing on the traditional bucolic scenes more often considered as landscape photography. But I have a place in my heart for both.

Another quickie post today because I have to be on a Zoom call soon and have chores (and a shower!) to fit in before then.

I took the following photographs shortly after the Empley Moor images from yesterday’s post. 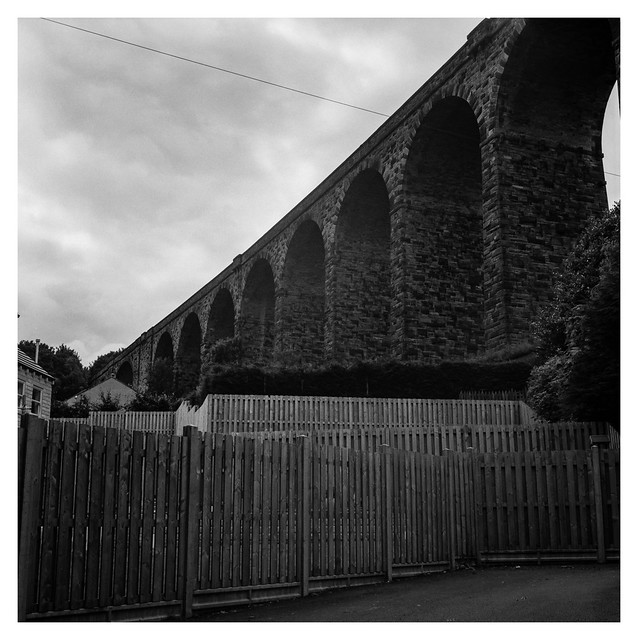 The town of Denby Dale sits a few miles to the south of Empley Moor and has a wonderful victorian viaduct spanning the valley in which it sits. 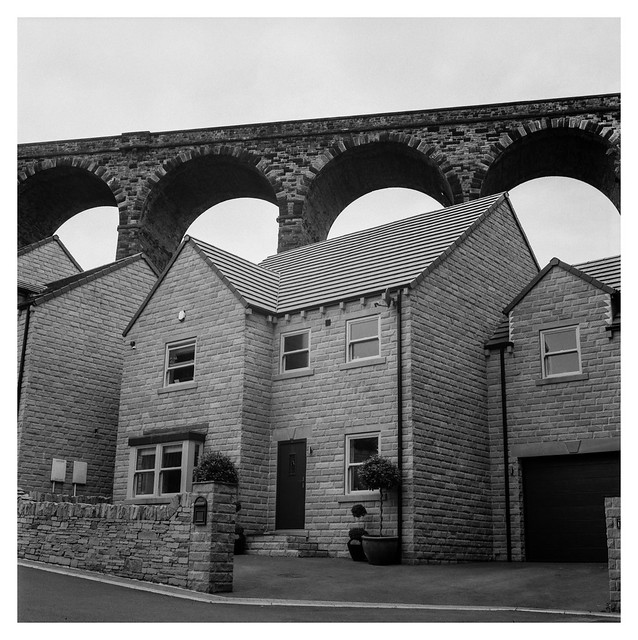 The location of some homes beside the viaduct made for some interesting pictures. 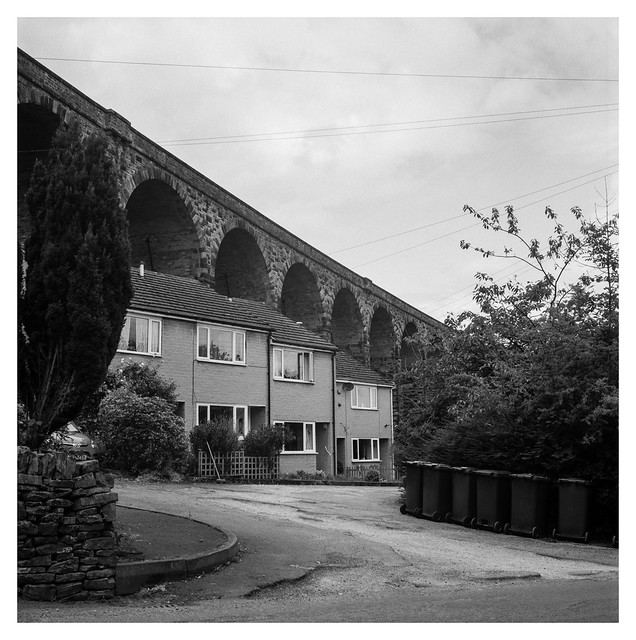