I have a slight fascination for taking photos of postboxes – I think it’s because of the way colour film renders red (although, that said, I have some black and white shots of them too!). I liked the way the low autumn sun was lighting this one. 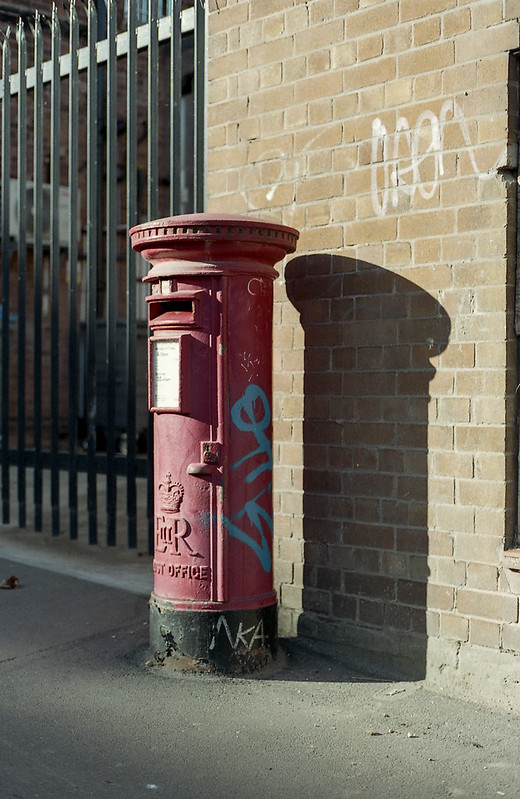 This small UFO was sighted on a lamppost in an alley joining the two roads. I’m a bit of a sucker for shallow depth of field shots. 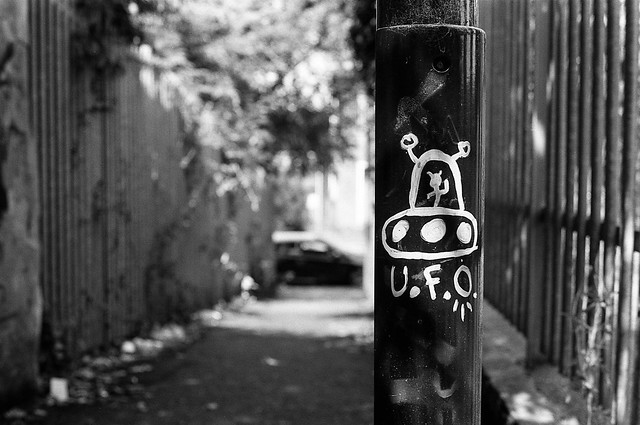 I went up town last Saturday with the primary intention of taking some photographs (although I did have a secondary mission to pay the deposit for a restaurant booking that my wife had made). The weather was bright and warm, with some fluffs of cumulus (and some bigger wodges of cloud on the horizon) littering the sky. This was not to last.

Despite the conditions remaining the same during the twenty minutes of so it takes to drive into the town centre, literally as soon as I got out of the car, one of the aforementioned “wodges” of cloud was threatening the day with its massive dark bulk. The weather forecast app on my phone said not a word about rain though, so I fed the parking meter and set off to get some pictures.

I got the following shot of an old cutlery works entrance. 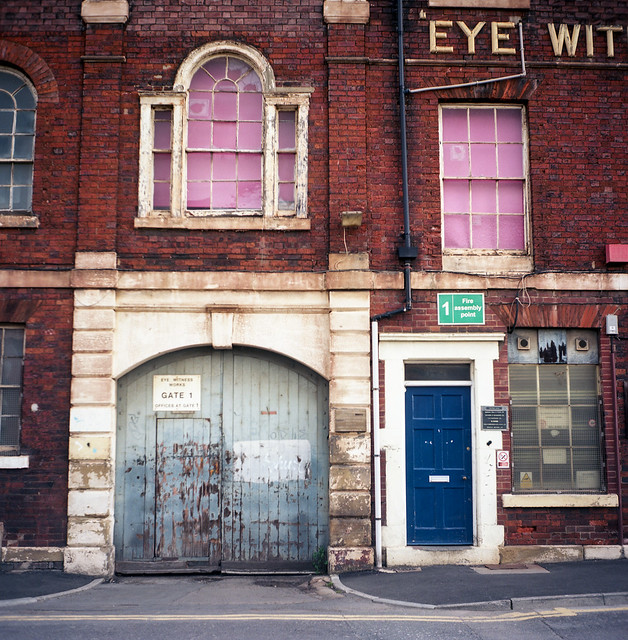 Then I followed the street leading to the back. There I started to line up another shot when I felt a few spots of rain – not heavy at this stage, but enough to potentially get on the lens and spoil the picture (indeed, a single fat droplet fell right into the open top of the Yashica Mat leaving a wet splash on the focusing screen). The only available shelter was a small doorway that was presumably a point of egress from a fire escape or something. It was approximately 18 inched deep, so enough to provide adequate shelter, but with the downside of having a noticeable air of urine odour to put up with. Still, beggars can’t be choosers, and literally seconds after stepping into the doorway, the heavens opened and rain began to pour down as though someone had turned on am enormous  shower in the sky. The heavy rain lasted maybe five minutes, but then took another ten to abate completely, so I remained in my shelter for quite a while. During this time I took the following shot. It’s a little out of focus, but it’s not a great shot anyway, but is included here as a memory of the moment nonetheless. 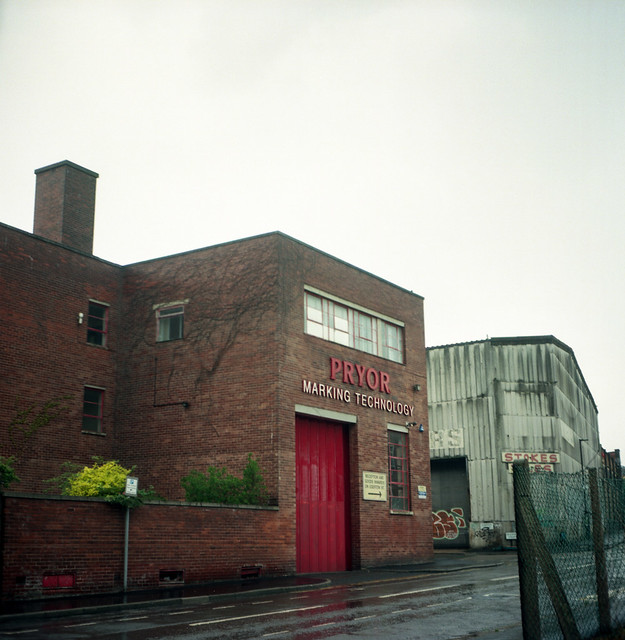 The next shot was taken from right outside my sheltering spot )it is directly to the right of where I took this photo). 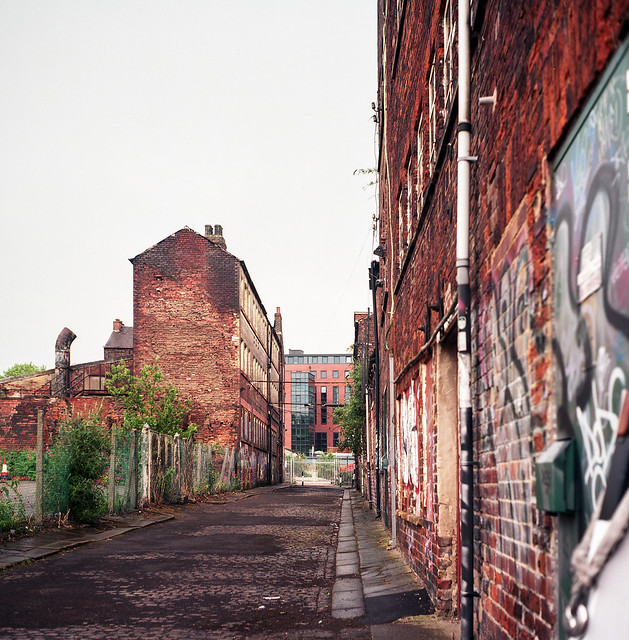 It’s interesting to see how the tarmac has worn from the streets in this area, revealing the original cobbled surface beneath. As well as the Yashica Mat, I also had my Olympus 35 RC with me, still loaded with the remaining frames of the roll of Kodak Colorplus I’d been shooting previously, and it was with this that I got the shot below (my sheltering place can be seen at the bottom left of the frame). 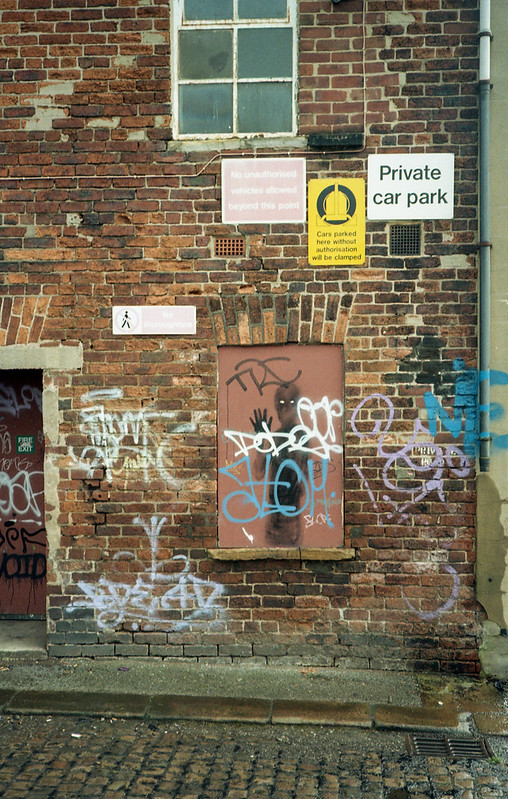 Further along this same street, I took the next shot of some graffiti. The shot is quite nice (if you like this sort of thing) with lots of texture and detail. The small red shape that can be seen at the bottom of the boarded-up window is actually a small door that has been affixed and is labeled “The home of Abdul the world’s smallest muslim”. Whether Abdul is a fictional character in the mind of the artist who added the doorway, or represents a real person (though presumably not small enough to fit through this small doorway!), I know not, but it adds some additional interest to the shot. 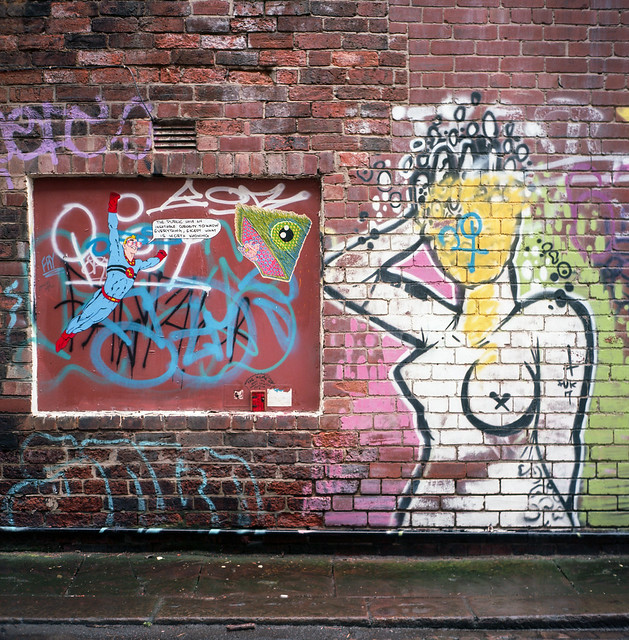 A couple more street shots from the same area are next, one from the Yashica Mat, the other form the 35 RC. There’s a slight John Bulmer-ish feel to the second shot in terms of the colour and conditions that I like. 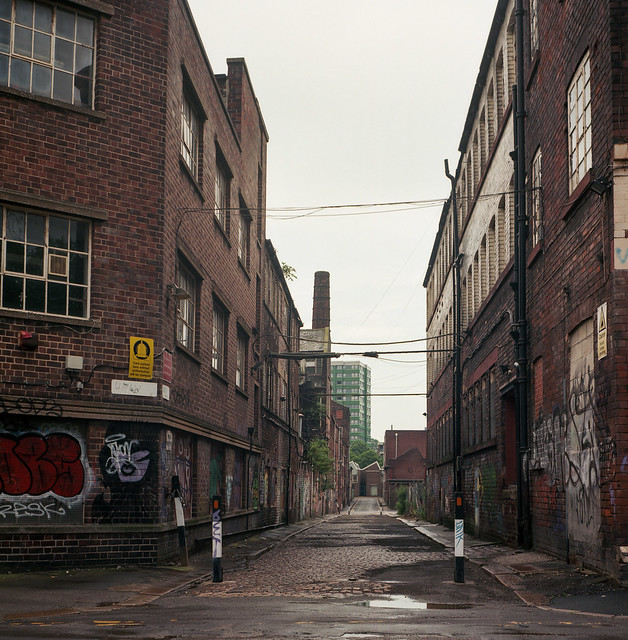 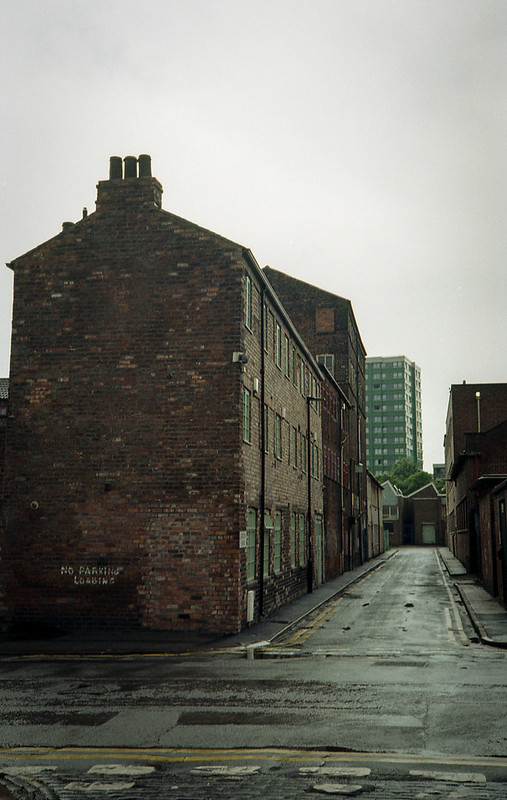 It’s interesting to think that, although relatively lightly traversed nowadays, that these streets would have been hives of activity at one time, with many hundreds of people employed in the area.

The last shot of this batch is taken again with the 35 RC, although I did a black and white conversion on the Colorplus as I liked the result better than the original colour image. 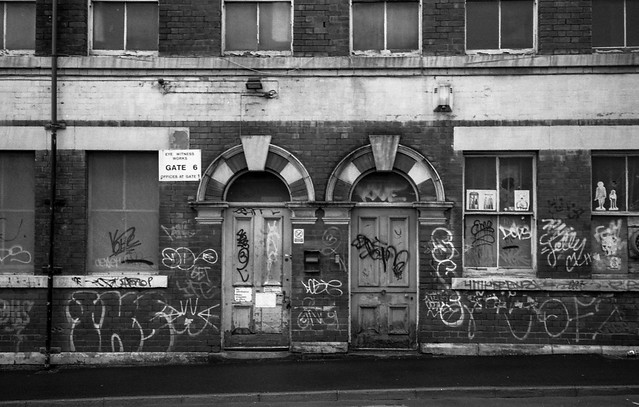 The weather was to brighten up again shortly after taking this last shot, and I’ll document the remaining pictures in the next post.