Here I am again, beginning a fifth year of daily posting on my blog. This will be the one thousand, four-hundred and sixty second consecutive post (I now fearfully await someone telling me I missed a day somewhere. Eek!). I don’t have any real plans to switch things up from the current format – a mixture of stuff about making photos, to random, usually brief, journal posts of my life and experiences – but who knows what this year will bring?

I’ve got a new camera to post about soon, but I need to figure it out and – importantly – take and develop some photographs with it first. Hopefully something to come on that in the next week or two.

For my first post of the year, here’s a picture from the Photographer’s Gallery in London. The gallery is split across a number of floors and the usual route it to take the lift to the top floor and then work your way back down to the bottom. The quickest way to do this is via the stairwell and, between two of the floors, there is a window that opens into a small offshot of one of the galleries where photobooks and other documentation about the current exhibition is available to be viewed by visitors. When I visited, the work of British photographer Chris Killip was being exhibited and my photo depicts two people perusing books of his work.

The exhibition was excellent, by the way.

Following yesterday’s post, here are three more gallery photographs from the Tate Modern. All three here were taken in the Turbine Hall, a huge space named after it’s previous use when the building was the home of Bankside power station. It really is an impresive venue and can be viewed from several different levels. Looking down upong the other visitors gave views of scatterings of tiny, Lowry-like figures below moving this way and that.

I’ve posted photographs shot inside galleries her on the blog on a number of occasions before (e.g. here, here, here, and here). They are not always the easiest places to make pictures as they can be quite dimly lit, necessitating slow shutter speeds, wide apertures, and the chance of motion blur and camera shake becoming present in the photos. They are, nonetheless, quite appealing locations, I find.

The photos today were shot in the Tate Modern gallery in London.

After a week or two of posting colour images, today marks a return to black and white. I still have a number of colour images from the two recently shot rolls that I haven’t posted here though, so maybe they’ll get an airing if I feel a splash of colour is required.

Today’s image is of the stairwell in The Hepworth gallery in Wakefield. I visited the gallery back in the middle of the month before social distancing rules were introduced, and then enforced by the nationwide lock-down. The gallery, along with other such venues around the country, has now closed until further notice, so I was lucky to get to attend when I did.

The reason for my visit was an exhibition about the relationship between the photographer Bill Brandt, and the artist and sculptor Henry Moore, who had met during the second world war when they were both documenting the plight of people sheltering from air-raids in London’s Underground stations. Their relationship continued with an interest in a number of shared themes throughout their careers, including the human body, the landscape, industry and others.

While I was predominantly interested in Brandt’s photography over Moore’s artworks, the latter’s sculptures are wonderful to see in person and made for a number of interesting photographic opportunities, some of which I’ll be posting over the coming days.

For now though, here’s a more mundane subject, but one which I think has made for a nicely satisfying picture – namely the mid-level landing in the gallery’s stairwell. I liked the shapes, textures, tones and symmetry (although it’s not really symmetrical). 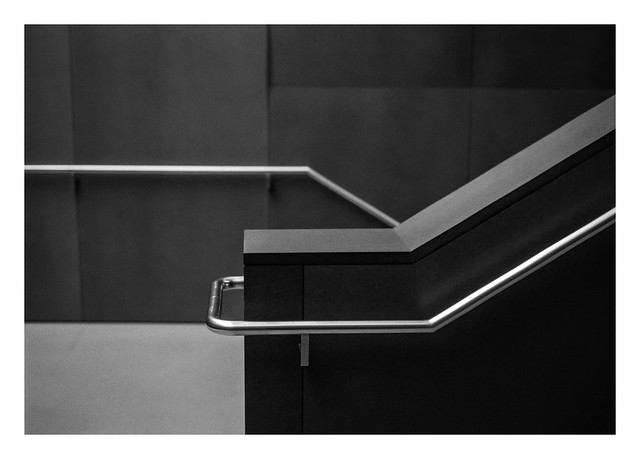 I visited HIP Fest at the weekend – Hull International Photography Festival. This is the third year I’ve visited and there are always interesting things to see, both in the exhibition spaces and also in Hull itself.

The photos in today’s post were taken as I was browsing the work of Claire Armitage, who has a series of self-portraits on display in the main atrium area of the shopping centre where most of the exhibitions are placed. I quite liked the framing of the photos on display and people walking past the white wall in the background, so took a few shots.

While I don’t dislike these images – the first one is my favourite – I really should have been patient and waited for further opportunities as the second shot would have been better taken a second earlier, and the woman in the last one is ever-so-slightly out of focus. Alas, I only had a few hours to spare and felt the need to hurry to cram in the other things I wanted to do while there.

This was also the first time I’ve ever pushed film. While Silverfast seemed to want to overexpose all the scans (I got better results using the Pan F 50 setting than HP5+), the one’s I’ve scanned so far have come out pretty well, and the faster shutter speeds that I was able to use were very useful when shooting indoors or in the dark and overcast conditions outside. 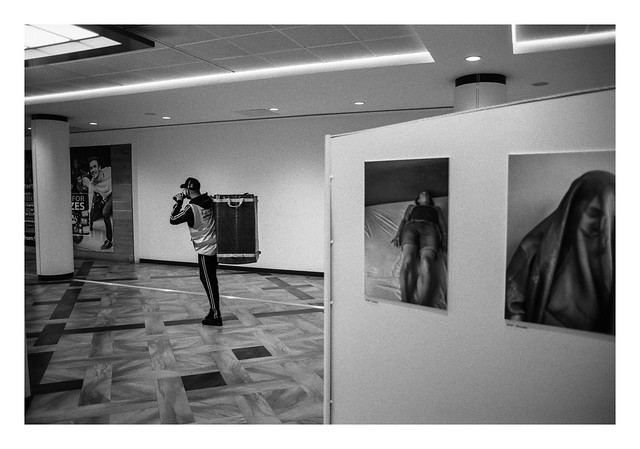 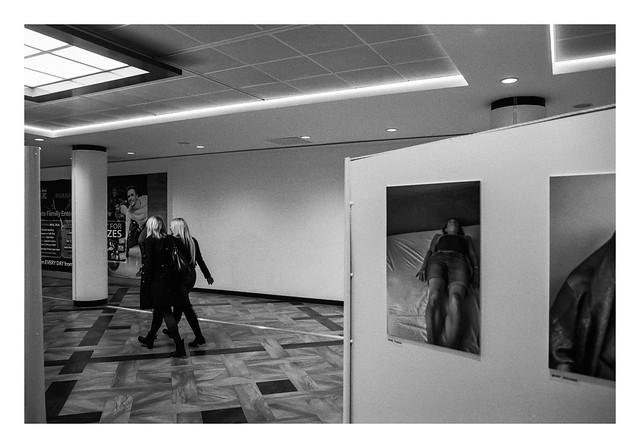 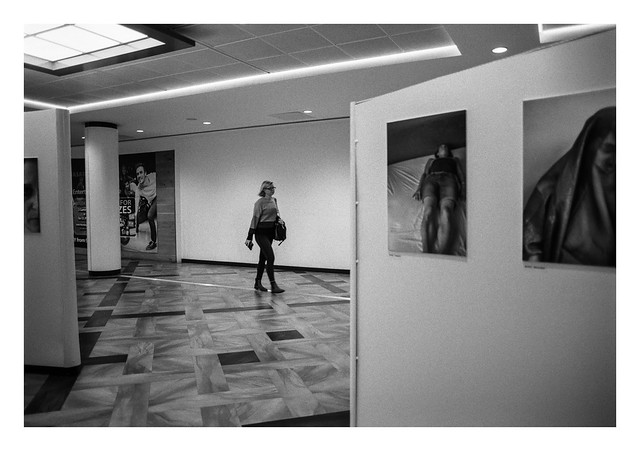