I wonder what this wooden groyne looked like when brand new? And when it actually was brand new? It would be interesting to know how many years of being pounded by waves, pebbles, and sand it took to reduce it to this somewhat broken-toothed appearance.

At Hornsea, where the wooden groynes meet the sea wall, concrete steps have been placed to allow people to bypass the wooden structures. The sun was bright and contrasty by the time I made these pictures and, as I had a roll of Fuji Acros in the camera at this point, I thought that these steps might make for decent subjects.

While I’m sure that this little boat once served some actual water-borne purpose, it now looks to serve as decoration for this building which houses a shop, a cafe, and I believe, the inshore rescue service.

I spoke a little about the erosion that is taking place on the shoreline of Yorkshire’s east coast the other day. These two pictures show how close to the edge some of these caravans are sat. While they no doubt have wonderful views out over the North Sea, I think I’d be tempted to move to a new pitch if I was the owner.

This video gives a good view of just how parlous the situation is for structures placed close to the cliff tops in this region.

Someone had been walking barefoot across the beach at Hornsea on the day I visited. Whoever they were, they had moved out of sight before I came across their tracks.

I like this picture but can’t help but think that there was a better one to be had. I wanted to keep the building in frame at the upper right, and I wanted a crashing wave as well, both of which I’m happy with, but the placement of the footprints isn’t quite how I’d like it.

Scenes like this require care. walk into the scene and, to quote Joel Meyerovitz, it becomes bruised – in this case the risk that the smooth sand becomes tarnished with my own footprints as well as the unknown walker’s. Maybe I should have sought out more patience but, as usual when I visit somewhere that’s not as easy to get to, I like to try and maximise my value from the day and see as much as I can, which means I tend not to hang around a sinmgle location of photo opportunity for too long. Perhaps I would improve my photography if I did.

Got tied up with something tonight that took waaay longer than I had planned, so just a quick upload today. A shot I took three years ago but didn’t really do anything with until yesterday. I’m quite pleased with it. 🙂 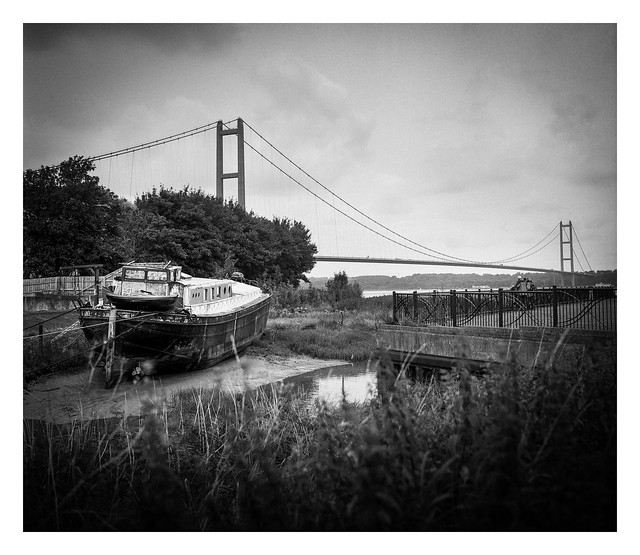 Jumping back six or seven weeks for today’s image, a shot of the City of London skyline taken from the South Bank at Blackfriar’s Bridge.

I like the way this has turned out – there’s a very slight haze on the tall buidings that gives a nice tonality to the shot. Even with a somewhat flat sky, I still think the image works well.

The handily-placed boat doesn’t hurt either. 🙂 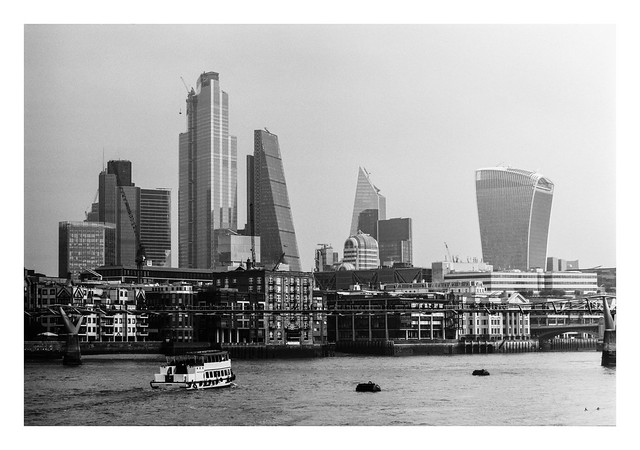 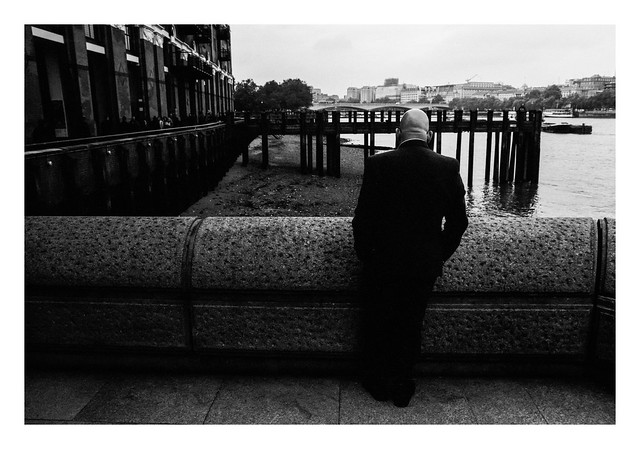 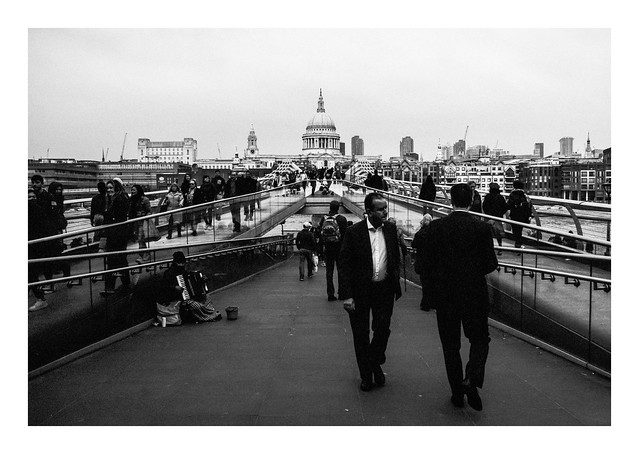 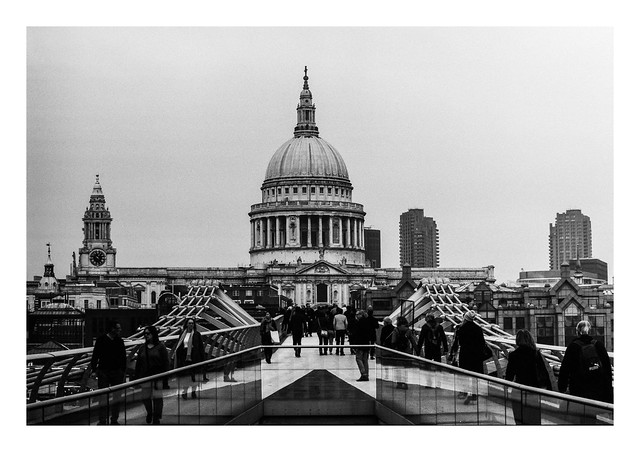 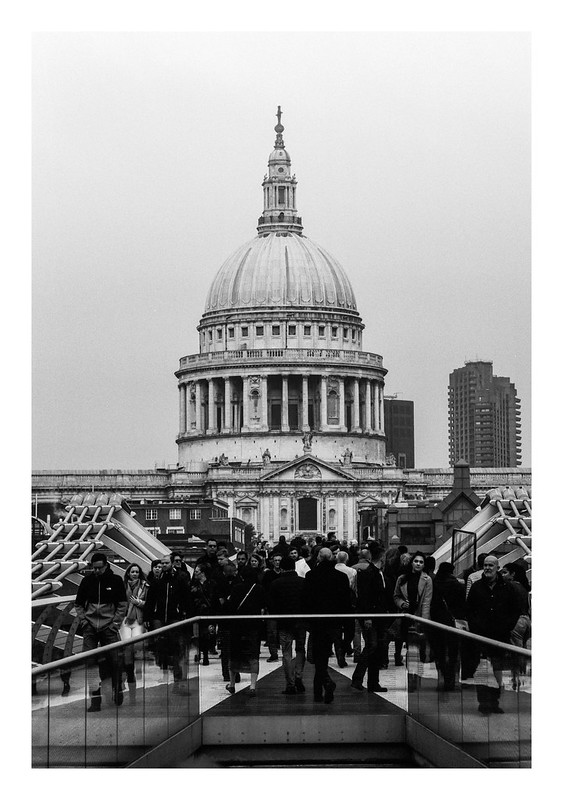 I shot a roll of Fuji Across a couple of weeks ago and, expecting the weather to be a bit on the gloomy side, pushed it to 400asa. As it turned out, the sun decided to come out for at least some of the shots. This resulted in super-hight-contrast images being the outcome. Across is pretty contrasty anyway, but pushing it amplifies this noticeably, such as in today’s photograph of a street corner convenience store in Southwark in London.

The sunlit areas, particularly those with lighter tones stand out vividly, while the shadows have been reduced to deep blacks – the lady on the left of this shot seemingly emerging from a pool of liquid darkness.

I do like a contrasty image, but care needs to be taken when shooting in such conditions of light and shade that it doesn’t become too much. I’m pretty happy with this one – there is still detail in the highlights, and while the shadows are deep, they work nicely withe the brighter details popping out of them. 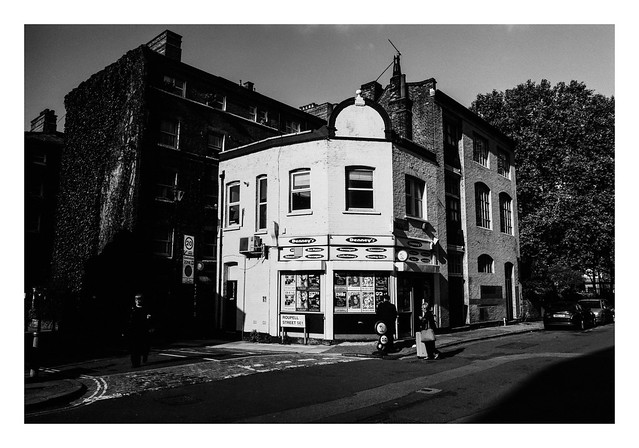