Today’s photo shows another angle of St. Peter’s church at Elmton. This was the view that I spotted as first approaching the village by road, but there was nowhere at this spot where I could park (the roads being quite narrow with no verge that I could pull onto), so I continued into the village and parked my car on the road beside the church. After making a few photos around the church itself I decided to walk back to the vantage point I’d seen earlier. I could have followed the road which, in this picture, passes the wall just in front of the church, heads to the left of the scene, and then takes a 90-degree turn back towards a place close to this spot. But there was a shortcut…

Looking at my maps app on my phone, it was apparent that there was a public footpath through this field which cut the corner. Sure enough, I spotted an old wooden footpath signpost and a stile built into the wall beside the field. Climbing the stile I set off across the field. It quickly became apparent that the grass was longer than I expected and also that very few people must use the path as there was no real evidence of it’s existence, not even in the form of some slightly flattened grass. Nontheless I perservered and made my way down the slope to where my map showed the path exiting the field. As I progressed, the grass in the field began to be joined by clumps of large hardy weeds that I had to skirt and also, worse, nettles! Given I was wearing a pair of cargo shorts, thoughts of stung legs came to the fore of my mind, and I had to take even more care over where I walked.

Eventually I reached the spot where I made this photo, and I ducked into the grass to allow it to provide more prominent foreground interest. It turned out to be the final frame on the roll, so I continued down to the corner of the field and the exit. Unfortunately the exit was conspicuous by it’s almost complete absence, with all that I could see was a rusty kissing gate almose buried in tall weeds and more nettles and then continuous growth for about the next ten feet or so. I could have walked back the way I came, which would have been a sensible option, but the thought of forcing my way through the high grass didn’t appeal, so I decided to chance the overgrown exit instead. It probably took me as long to do this as walking back throuh the field would have done.

I had to procede with great caution, carefully placing my feet as to squash the nettles away from my legs with each step. By some miracle I wasn’t stung a single time, although the final four or five feet involved me making a daring leap across a clump of nettles right where the verge dropped down onto the road. No doubt this would have looked highly amusing to anyone passing by, but thankfully no-one was around.

In the end I had to walk back via the road anyway, so maybe it would have been simpler had I used that route for both legs of the jaunt. But then what would I have written about today? Plus the picture was worthwhile, I think.

I already posted a shot of this path in an earlier post – that one shot with my OM-2n on Delta 100. This was made shortly afterwards and a little further down the path.

These clear skies show how the Sure Shot Supreme tends to vignette – something I’ve found to be the case in a number of compact 35mm cameras – but it’s not an unpleasant effect.

The flooded field in the two images presented here today is where a footpath runs. It leads down from the Trans Pennine Trail towards Eckington and passes close to a copse of trees that I’ve photographed on a number of occasions (see here and here for instance). On the day I made these photos it was unpassable however. It probably wasn’t too deep, but likely deep enough to overflow my walking boots with frigid liquid, and I doubt the ice was thick enough to support me upon its surface. I knew I should have started that diet!

Another thin skim of snow greeted me when I awoke this morning, although it had melted a few hours later and bright blue skies appeared. Had I not been working I might have gone for a walk and made a few pictures, but that wasn’t the case. In the event, I still grabbed a couple of images later in the afternoon when I saw some of my wife’s ornaments catching the afternoon sunlight. I used the Yashica Mat with the close-up lens set. Still ten more frames to shoot though, so it may be a while before they see the light of day (well, for a second time!).

In the USA
Georgian Democrat double
Turn the Senate blue

And to finish, another picture from the Christmas Eve walk.

My two week’s leave came to an end and today marked my return to work. The last things I did before the Christmas break seem distant and yet the two weeks seem to have flown by in an instant!

Another Christmas Eve walk photo today. I saw this house / farm peeking over the growing crops in this hillside field and thought iw ould be nice picked out with the telphoto lens. The footpath through the fields was a somewhat nerve-wracking experience as it had a thin skein of surface mud that threatened to take my feet out from beneath me! I don’t thinks I would have gotten hurt, but muddy and wet would be unwelcome all the same. Luckily I managed it to the bottom intact.

I hope nobody is getting bored of mist yet? There are still more to come – some of them in colour! 🙂

I think the lone tussock of grass in this helps the shot a lot. It would still have had a pleasant abstract nature without, but it being there in the foreground anchors the image.

Apologies for the somewhat short posts this week. I’ve had some other things to keep me occupied so not enough time unfortunately. 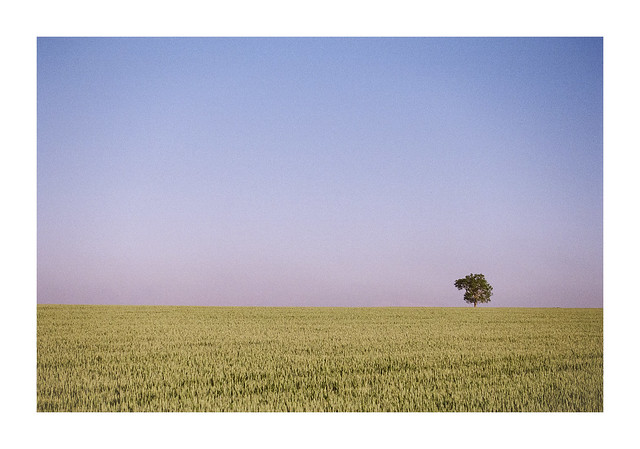 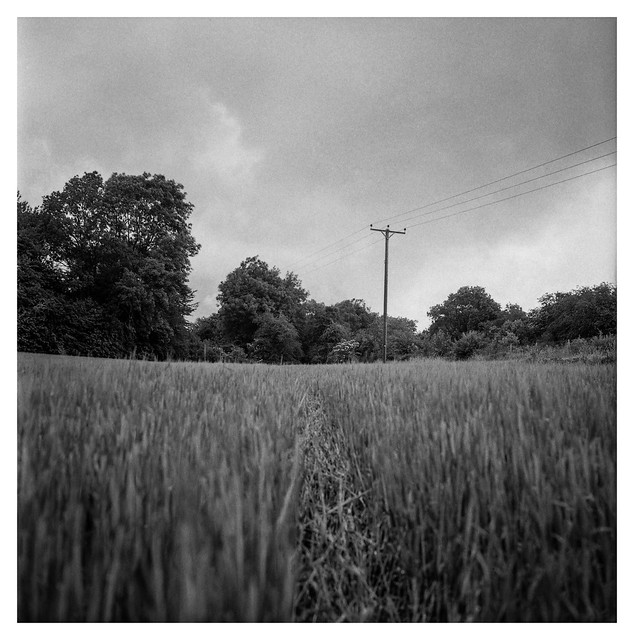 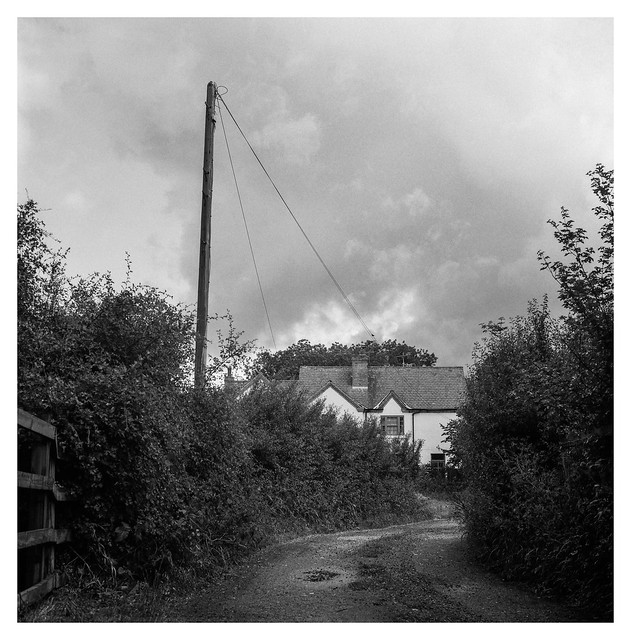 It’s Friday evening again and I have to say that I’m very thankful for that fact. I’ve had a very busy week at work once again and am really looking forward to relaxing a little over the weekend. Hopefully I might get out to make some photographs – I have around six frames of 135 Ilford XP2 sat in my F70 that I want to shoot, certainly, which can then be sent off for developing along with a roll of Kodak Gold I finished a couple of weeks ago.

The weather doesn’t look particularly great on either day this weekend, but I can live with that – although boring flat grey skies or torrential downpours might put me off. I shall wait and see I suppose. If all else fails I’ve got a huge pile of photobooks to catch up on.

Today’s picture completes a hattrick of consecuitive shots from the same roll of Shanghai GP3 that I’ve posted photos from the past couple of days, this one being the last one on the roll. The backing paper had bled through on this one (and a couple of others), most notably in the sky,  so I’ve fixed it in Photoshop (although it was a bit of a quick’n’dirty job if I’m honest). 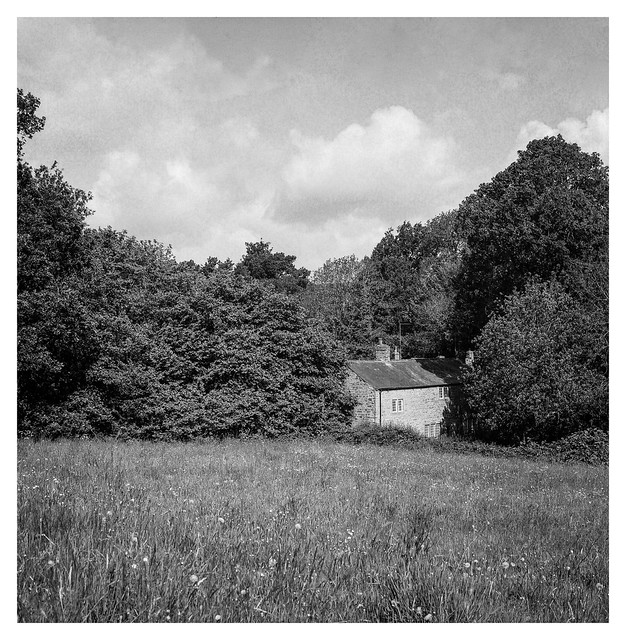 Have I posted a photo of some power-lines recently? I’m pretty sure I must have – because I post pictures of them all the time!

Well here’s another one – this is the FINAL pre-lockdown photo I took, the last frame on the roll.

It’s the same field where I took the shots I posted here, back in November of last year. 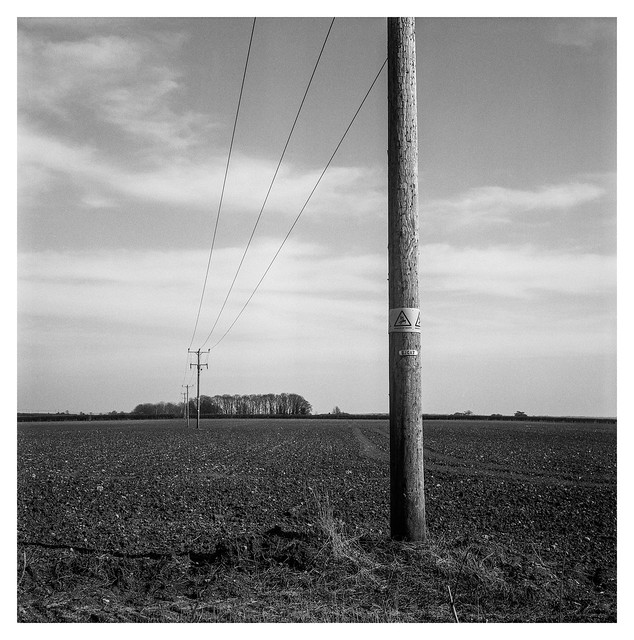