The building on the left of this shot – the one with the wooden structure attached – houses a Newcomen steam engine at Elsecar Heritage Centre. It is, apparently, the oldest steam engine in the world still in its original location, dating back to 1795.

Apologies for another succinct post today. My wife and I went out for the evening and I didn’t get chance to write something before we left. <feeble excuse ends>

This is the railway station at Elsecar Heritage Centre. It forms the departure point for trains running on the Elsecar Heritage Railway, the only heritage line in South Yorkshire. At this time of the year the line runs “Santa Specials” where you are able to enjoy a trip on a train (consisting of vintage carriages usually pulled by steam locomotive) and the children are visited by Santa who gives them all presents during the journey (adults get a hot-chocolate or a mulled wine). While my own children are too old for such things now, I have fond memories of taking them on these trips when they were younger.

There was no sign of the steam loco on the day I took this and the station itself was closed, so this photo was taken through the gates at the level crossing just beyond the station. Fog and mist always adds a wonderful quality to photos, I think.

I took an almost identically composed picture with the Zeiss Mess-Ikonta just before this one. That’s a nice photograph too and much sharper due to the Zeiss glass, but I think the Holga shot just pips it to the post. Maybe because it’s more contrasty – the Holga’s single shutter speed and limited aperture control largely dictates the final exposure of the image, and I think this slightly darker one wins out in that respect. The Holga’s vignetting and soft edge focus also works very well to draw your eye into the frame, which is often an attractive compositional feature. 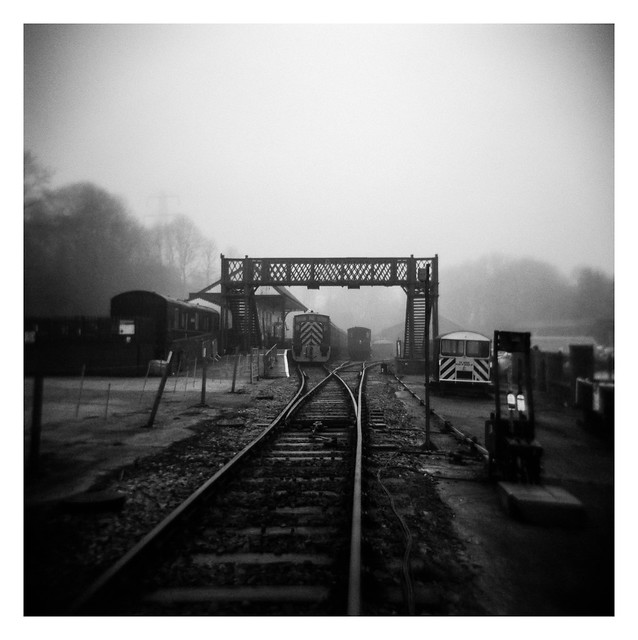 I mentioned in the last post that I’d also had my Olympus 35 RC with me on the trip to Barnsley and Elesecar Heritage Centre. Most of the roll it contained was shot subsequent to that day and will probably form the basis for another post soon, but here are some shots from that same trip (plus a few  bonus extra pictures that were not).

I like the 35 RC, it’s capable of some nice results and has the great bonus of being absolutely tiny. This means it’s easy to take on trips and also means I can usually get an extra shot or two out of a roll (although I only managed 36 from this 36 exposure roll this time). The film used was Kodak Colorplus 200, Kodak’s budget offering. I’d not used this before but liked the look of the film in other people’s shots (where it had a slightly vintage, 1970s look to it, I thought) and I have to say I’m pretty happy with the results. I like the look of the film and it seems to have less noticeable grain than the other low-cost film I often use – Agfa Vista Plus 200. On the downside, it was an absolute pain in the backside to scan, with the entire roll having a defined bow along the length, and necessitated me scanning just one strip at a time, and then only two or three frames at once as I had to use some pieced of card to flatten the negatives in the holder. In the end I estimate it took at least four times longer to scan than other 35mm films I’ve used. And I still have a couple of rolls left – good job I do like the look then, eh?

The first set was taken in Barnsley in the car park where I’d left my car before attending the photo exhibition, and as I was saving the remaining frames of Ektar that were in my Yashica Mat for Elsecar, I fired off a number of snaps with the Olympus. There’s a bit of lens flare on the second shot, which is a shame, as I like it otherwise, but the third shot with the red fire sticker is may fave of these three. 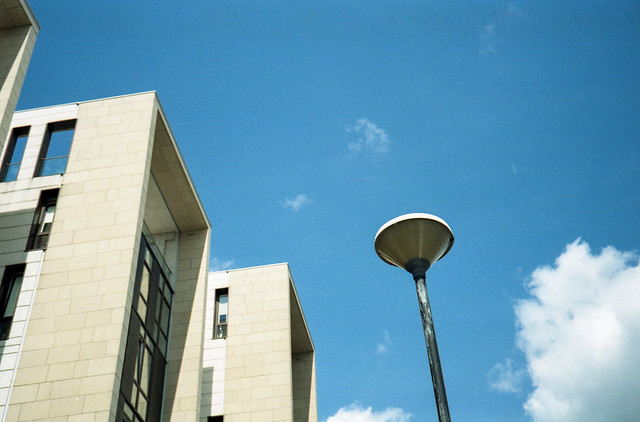 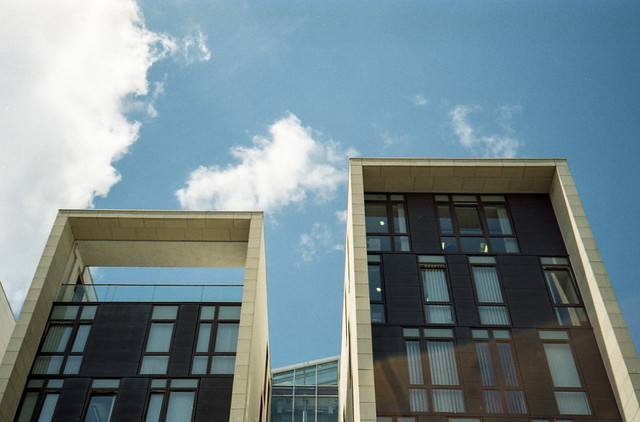 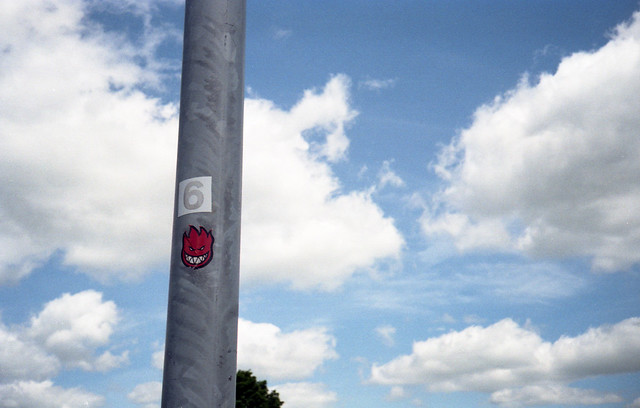 The next small batch are from Elsecar Heritage Centre. I took a shot of the same phone box with my Yashica MAt 124 G and there’s a clear difference in tones between the Colorplus shot below, and the medium format Ektar image, with the Ektar practically vomiting saturated colours from the frame! However, of these three, the window with the teddy bear is, I think, the best. 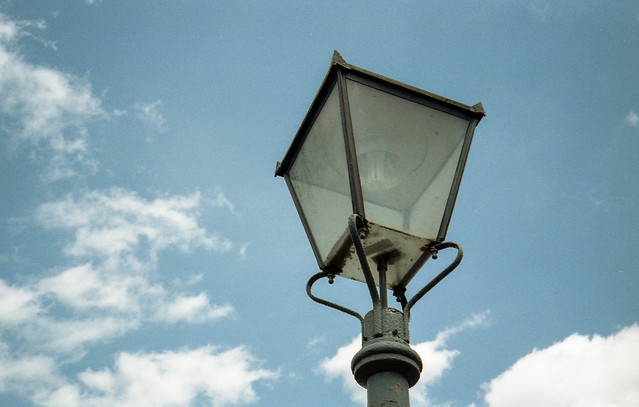 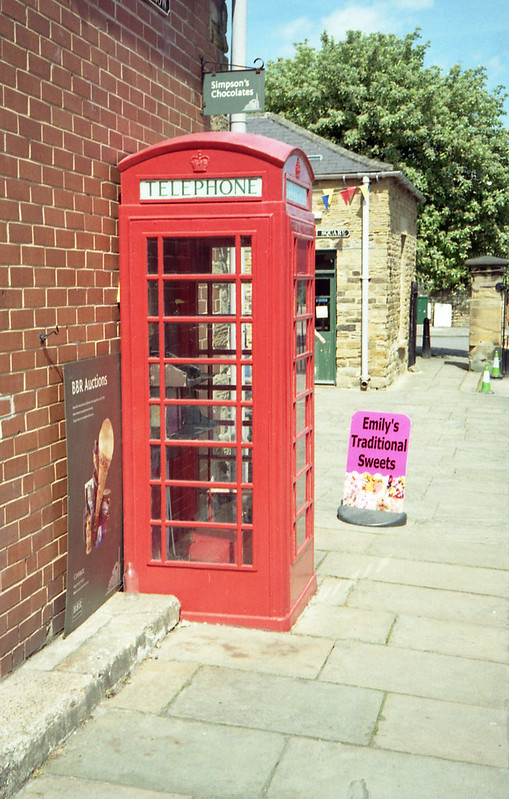 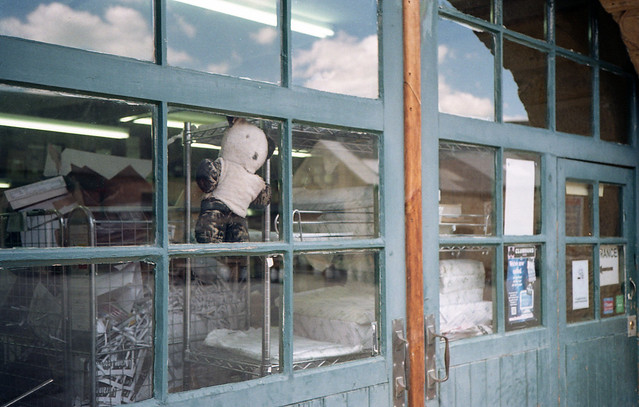 And finally, a few bonus shots. The first two pictures (of the cactuses and camper-van planters) were taken at Wentworth garden centre a couple of days before my trip to Barnsley, while the rhododendron is in my back garden. 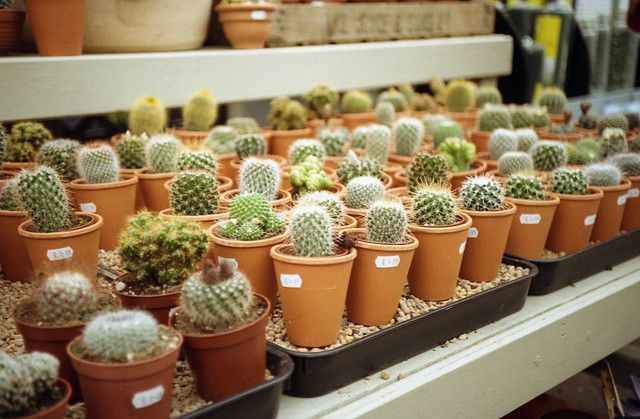 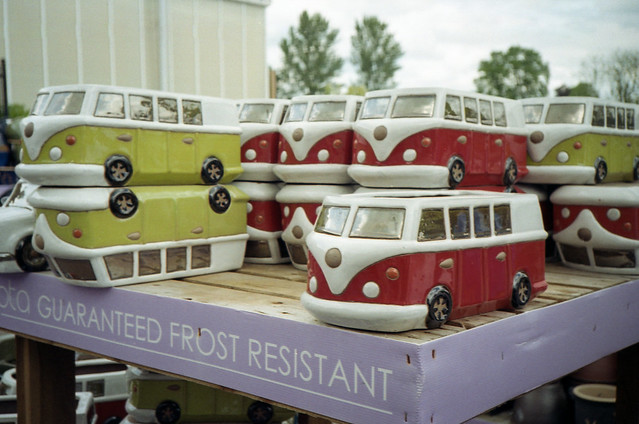 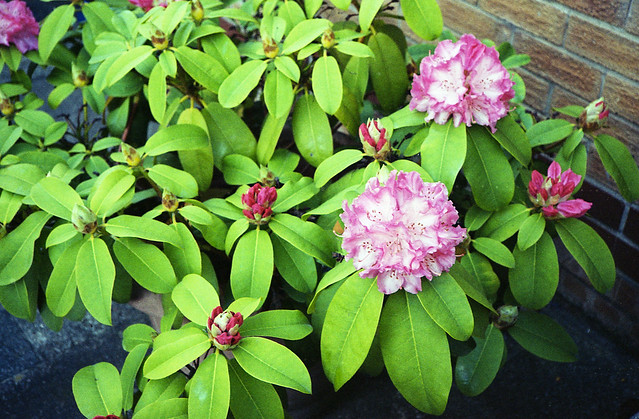 So, there you have it. It was nice to use the 35 RC again, and the results from the Colorplus were pleasing. I’ve another batch (taken elsewhere) to post about soon, so  keep your eyes peeled!

Last Tuesday I had a day off work, mostly because I had an appointment to keep in the morning (which turned out to be a waste of time thanks to one of the parties not turning up!), but it also meant I had a chance to travel up to Barnsley to see the RPS International Print Exhibition #159 that was on show at The Civic until the end of the month. I decided that I’d see the exhibition, then perhaps take a few shots around Barnsley town centre, and then visit Elsecar Heritage Centre (and perhaps Wentworth) on the way back home, and so took my Yashica Mat 124 G loaded with a roll of Kodak Ektar, and also my Olympus 35 RC (with some Kodacolor 200 in it). While I took a number of sots with the 35 RC, I’ve not had the roll processed as yet, so all the shots in this post are from the Yashica.

The exhibition was worth the visit and I took notes of some of the photographers whose pictures I liked so that I could look into their work more closely later. The exhibition ends this month in Barnsley and then moves on to a new venue elsewhere in the country I believe.

Despite Barnsley being only a short distance from Sheffield, it’s a place I’ve visited rarely – I’ve been maybe half a dozen times in my life – and so there was quite a lot of interesting things to photograph. However, as my plan was to go to Elsecar, I only shot a few frames in the town, mostly in the area just behind The Civic, where the exhibition was hosted.

Three shots were of a bar / restaurant called The Old Chemist. The place has, as its name wold suggest, an old apothecary style theme, and the windows are lined with vintage and antique bottles, and there’s an old-style gas-lamp on the corner (probably not gas-powered any longer). I think the third of these three is my favourite. 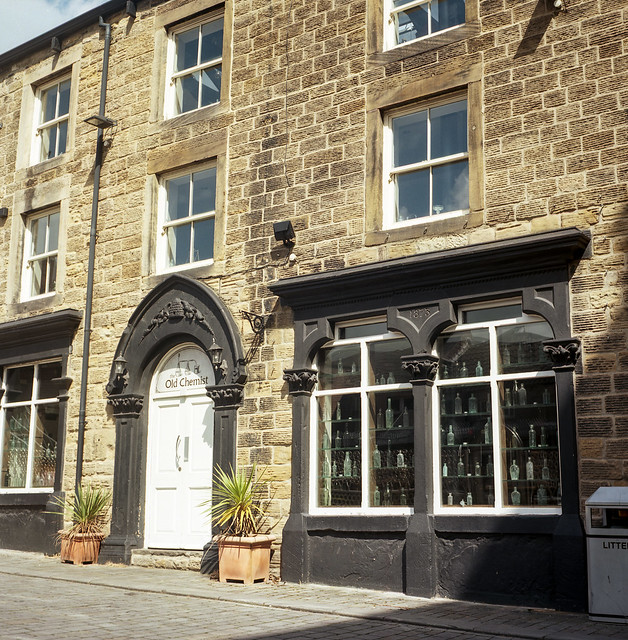 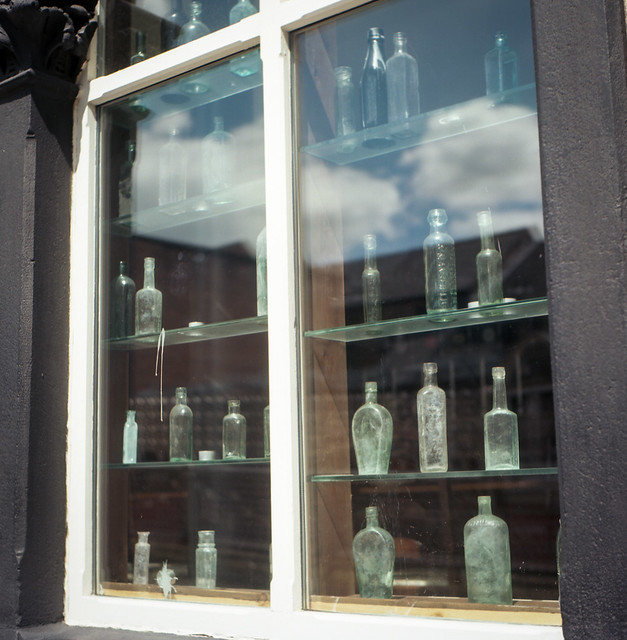 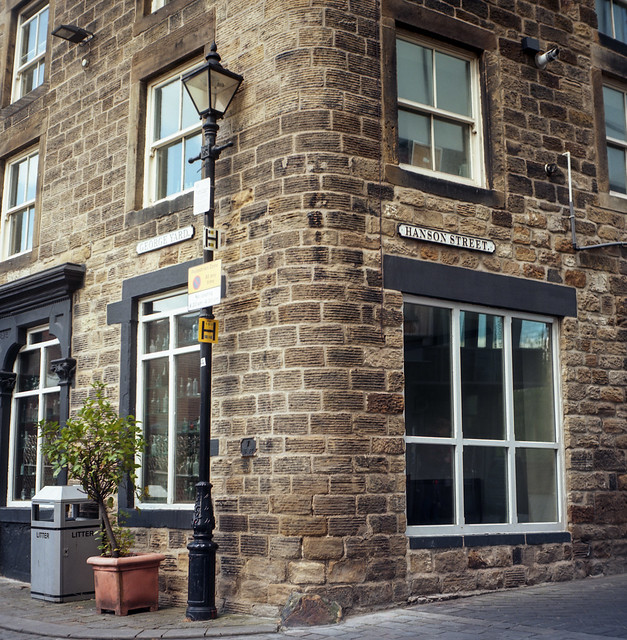 The final shot I took with the Yashica in Barnsley was of The Arcade, a pleasant pedestrian shopping row with an ornate glass ceiling. The shot’s ok, but it’s a little meh too. Better light would have helped, I think (the sun kept disappearing behind clouds – usually a second after I’d taken a meter reading – and I didn’t have time to hang around for the perfect conditions), and would have allowed me to use a smaller aperture. 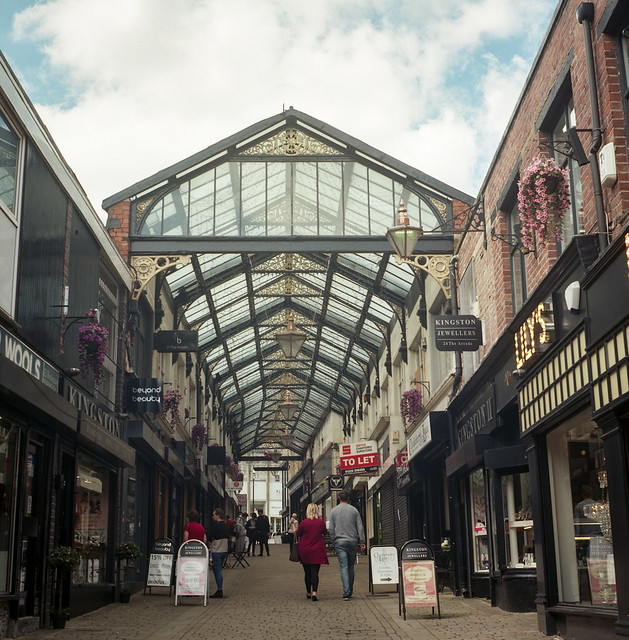 After returning to the car (and taking a few random snaps with the 35 RC) I set off out of Barnsley, down the M1, and to Elsecar (after a quick stop at KFC for a bit to eat. I sat in the car to eat and listened to the awful unfolding news about the previous night’s terror attack on the Ariana Grande concert in Manchester).

Elsecar Heritage Centre is located on the site of a former ironworks and steam railway. The railway still exists as a heritage line and runs a short distance from the centre. I’ve been on the train-ride several times as, at Christmas, there are special trips where Father Christmas is on board and gives the children presents while their parents have a cup of hot-chocolate or mulled wine. It was all very festive, but my kids have outgrown such things now. The station is small, but quite nicely appointed with a vintage feel to it, and I took three shots.

The first is of an old phone box tucked into a corner of the station building. The colour looks a little off, but that is the actual tone of the phonebox, which I suspect has either faded slightly in the sunlight, or maybe been painted an incorrect shade at some point. 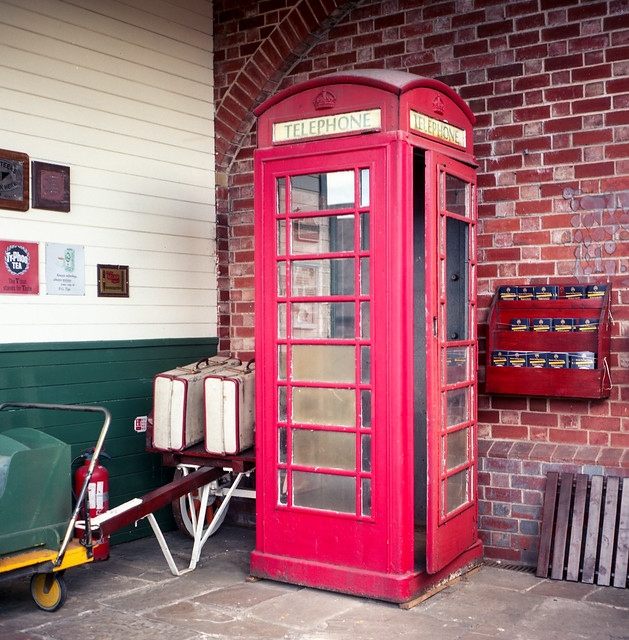 Next is an old set of scales that were on the platform. This ought to have made for a nice shot, but I’ve missed focus ever so slightly, so it’s a little disappointing. 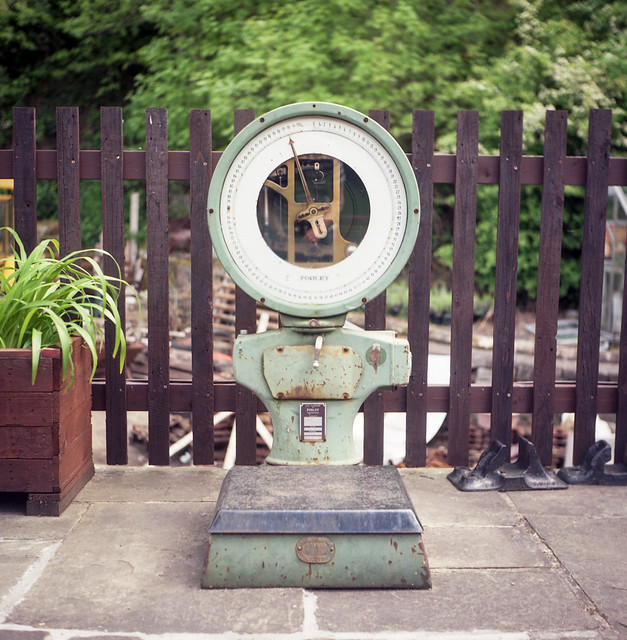 And here is a shot of a set of vintage carriages that were pulled in at the station (there were a few old locomotives too, but I couldn’t get a decent composition on any of them). I think this shot is probably my favourite from the day. Walking out of the station alongside the railway line leads to an old Newcomen beam-engine, the only one remaining in the world still situated in its original location. Sadly, I couldn’t find a composition of this that I liked either and so, instead, took this photo of a nearby footpath leading up the hill towards Wentworth. 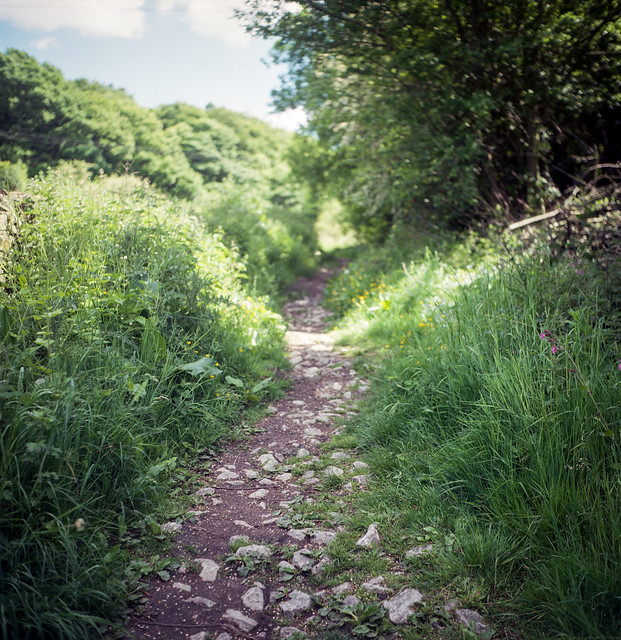 After this, I walked back into the heritage centre area proper and took the next three photographs. Most of the buildings are now given over t shops and other commercial enterprises (there’s a large children’s play area in the main building – again, we used to take our kids there sometimes when they were younger), and one of them is a large antiques shop. I spent most of my time in here to be honest, and it’s a lovely Aladdin’s Cave of a place. They had a few old film cameras for sale, but I resisted the urge to buy any! It was upon leaving this place that I realised my phone battery had decided to kill itself and was now bereft of any power, leaving me with no way to meter my shots other than Sunny 16 estimation. Luckily, the day was now quite bright and I managed to get my estimations close to the mark and all the remaining shots were well exposed. I’ve decided to buy a dedicated meter though so this doesn’t happen again. Back to the shots, and I’m in awe at the saturated colours that can be seen in the phone box shot (this was the first roll of Ektar I’ve shot), but the long shot of the foundry building and chimney is the best of the three, I think. 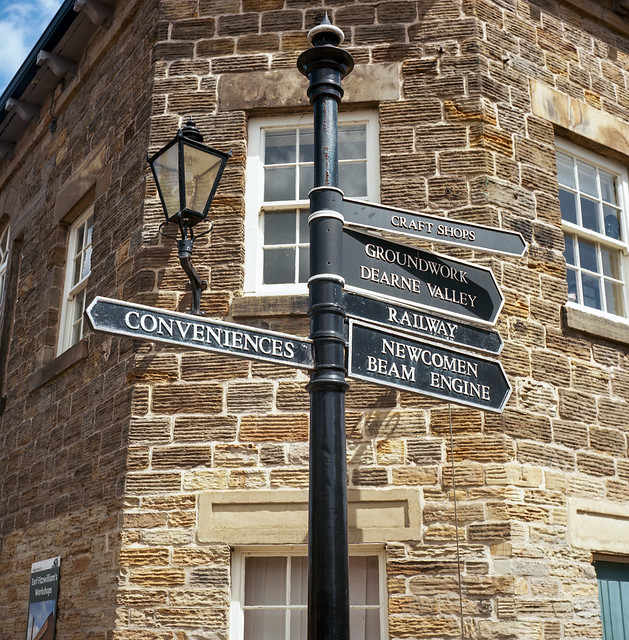 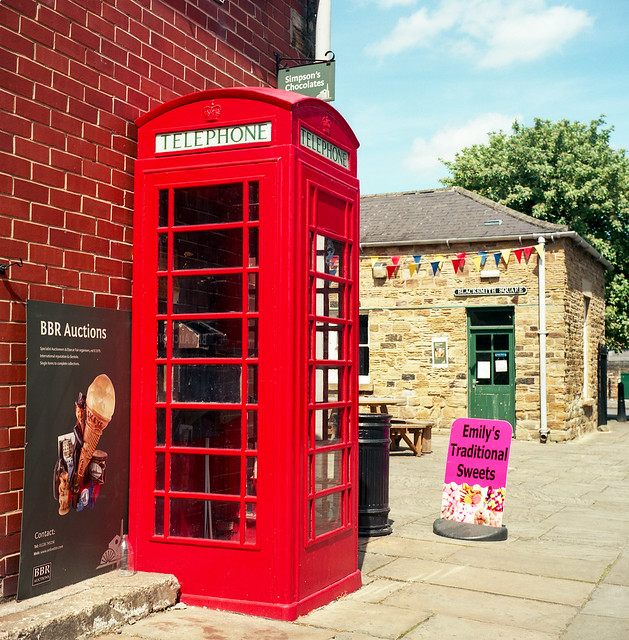 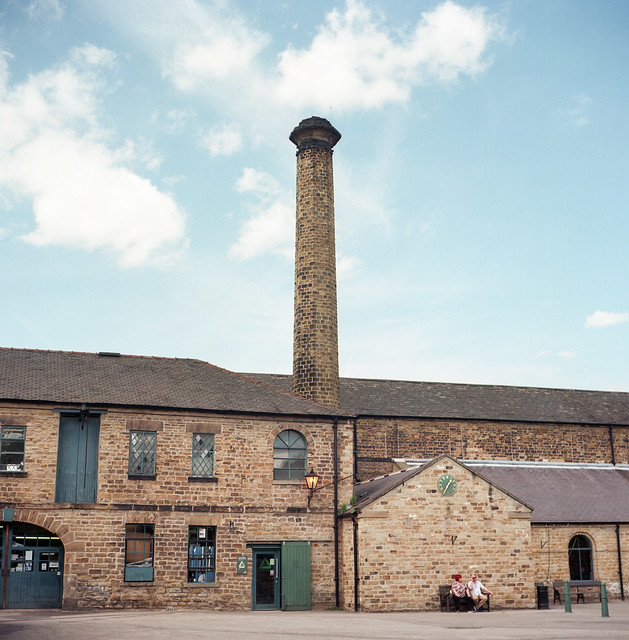 The final shot of the roll was taken as I walked past a pub on the way back to the car. I like the juxtaposition of the sign, flowers, and beer barrels, but I’m not really happy with the shot. The sun was glancing into the viewfinder of the camera and it was difficult to focus and compose the shot, so I didn’t really get what I’d wanted. Anyway, here you go, warts and all… 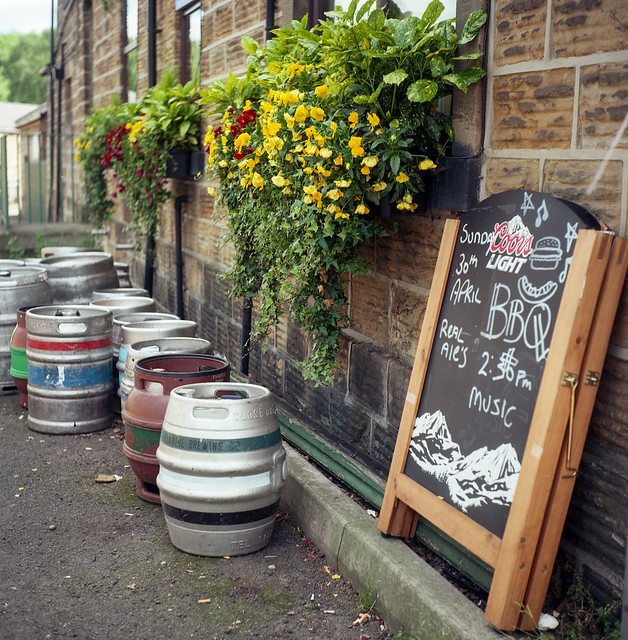