Another victim in the declining pub trade in the UK, the Farfield Inn stands at the western end of Neepsend Lane at the bottom of Hillfoot Road, not far from the busy route that is Penistone Road. There used to be pigeon lofts on the steep hillside along this stretch but those, like the Farfield Inn, have fallen into dereliction, their skeletal remains vaguely apparent in the brush that has grown to take their place.

“Fancy a nice pint?”
Would once have been said by those
Who visited here

A number of decades ago, back when I was young, I was interested in fishing. As a teenager still at school and blessed with only limited funds, most of the fishing tackle I owned was either passed down from my dad (including a dated, even at the time, cane fishing rod that snapped in half while making a cast one day, much to the amusement of my friends!), or acquired as presents at birthday or Christmas time.

I did have enough money to buy the other necessities of the pastime though: line; floats; lead shot (long since banned!); hooks; perhaps the occasional bigger-ticket item like a keep-net or something; and, of course, bait, usually in the form of a tub of wriggling maggots, often in a variety of dyed shades to make them more attractive to the fish (the ones at all the places I went must have been colour-blind though…).

At the time, years before online shopping and even the World Wide Web itself would be a thing, there were a considerable number of fishing tackle shops in the city. Some were dedicated to the pastime, others were a sideline, such as the barber’s that I visited as a child where you could have your hair cut and then buy a pike lure or something (while pretending not to look at the girlie mags that were amongst the fishing periodicals on a small table between the seats where you sat and waited your turn).

The largest tackle shop in Sheffield (and the country, so it was claimed) was Bennetts. The shop had been opened back in the 1950s by Harry and Peter Bennet, renowned match anglers and railwaymen who used to organise angling tournaments for thousands of local fishermen.

In later years the store moved to larger premises on Stanley Street just off The Wicker on the edge of the city centre, and it was here that I would drool longingly over the extensive range of tackle that I had no possibility of acquiring, before buying a considerably more affordable packet of hooks or a swim-feeder or something along those lines.

As my teens came to pass so, mostly, did my interest in angling, and I probably didn’t set foot in Bennett’s (or any other tackle shop) after that, although my dad continued to fish on occasional trips with his friends that had been organised by the pubs and clubs he frequents, so I would get the odd fishing story every now and then (usually about how he’d caught nothing!),

In 2010 Bennet’s closed for good, partly as a result of the 2008 financial crash and subsequent recession, but also as result of the extensive flooding that hit parts of Sheffield in 2007, submerging the store in feet of water.

The main entrance to the shop on Stanley Street has been repurposed now, but the smaller entrance on The Wicker remains, gradually fading away and falling into disrepair.

I wish I had a photo of the shop in it’s heyday, but I’m still glad for the one presented below. It still serves as a memory and I suspect it won’t be there for ever. 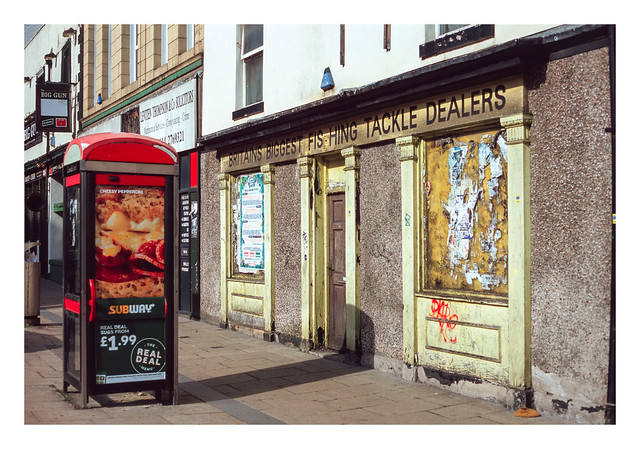 This is the entrance to the former Christ Church Central building in Sheffield city centre. The building is no longer used by the church – it appears they’ve moved just across the road to what looks like a bigger location.

I’ve never been in either building but used to work nearby when I was younger and also found it interesting how the church resided in a low-rise building mostly indistinguishable from the other small industrial units that surrounded it.

Now it looks like a group of weeds are awaiting the doors to be opened. 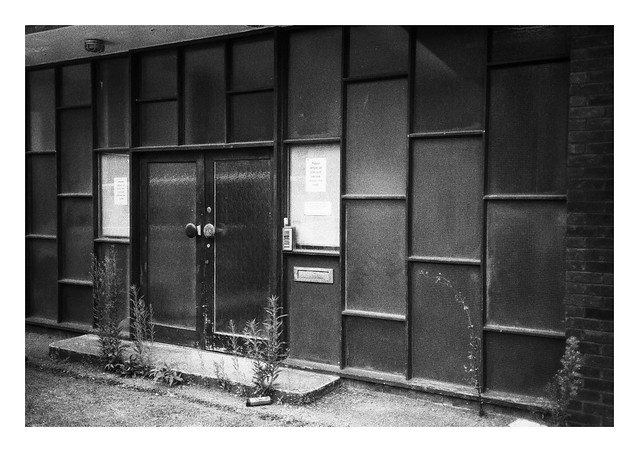 A couple of photos of the old Woollen Signs building in Sheffield. The company was bought out about twelve years ago and the site was permanently closed, having been in business since 1883. Some employees went on to form a new Woollens business trading on their expertise in traditional sign writing. 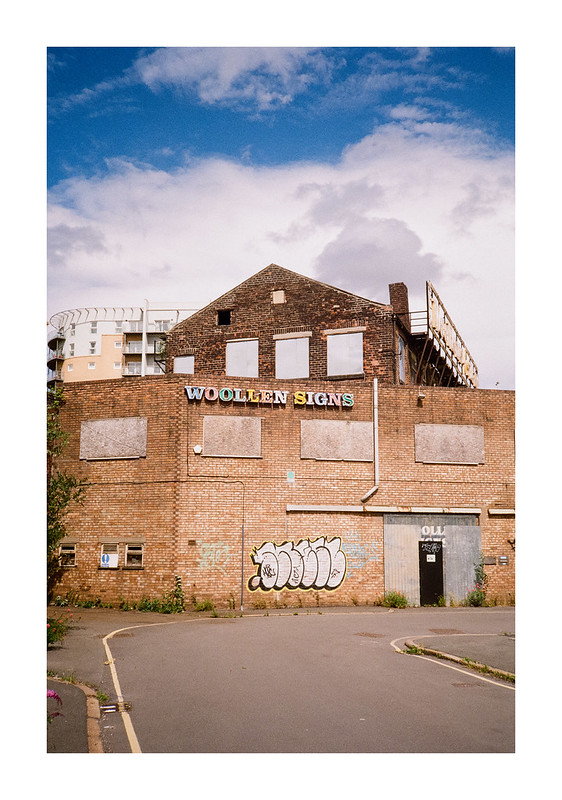 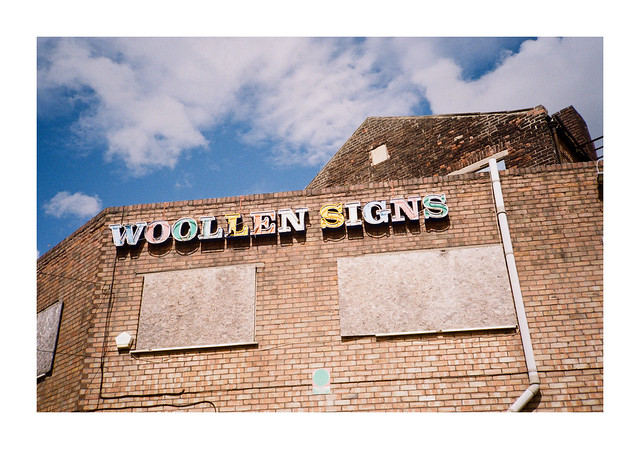 The area close to where I live was once occupied by coal mining. The local colliery – Brookhouse Colliery – closed for good in 1985. While the colliery land has been re-purposed in the intervening years – much of it as a country park with large lakes where opencast workings once were – there is still plentiful evidence for it’s industrial past. 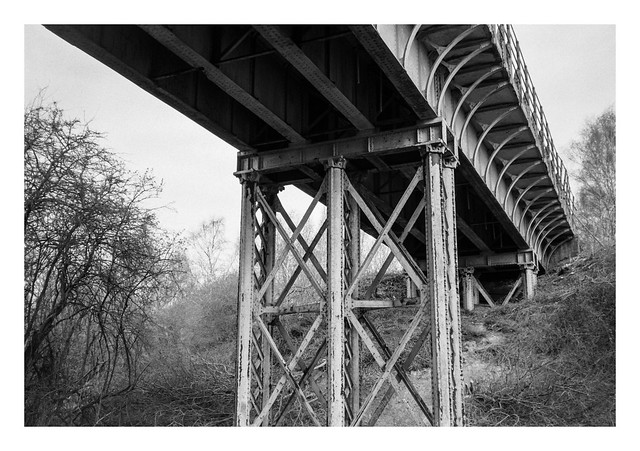 In the area around the Trans-Pennine trail there is a network of railway lines, one still active for passenger and goods use, but the others now disused with the tracks and the other equipment removed. Their presence can be felt in the various cuttings and bridges that still remain though. 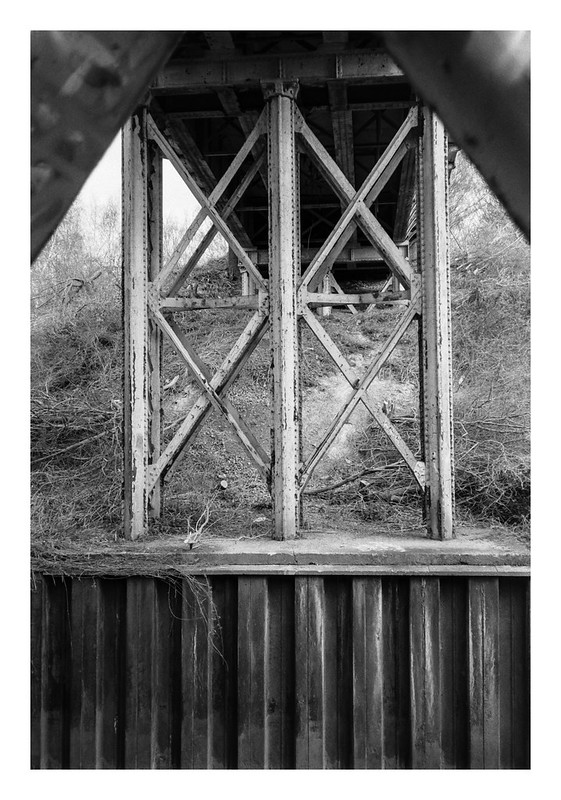 Today’s images are of one of the surviving bridges – this one crossing the River Rother. Once, while exploring the surrounding area, I found myself atop this bridge and walked its length – a process that became significantly hastier when I noticed holes in the metal beneath my feet! I’ve not been atop the bridge since then, but there is a footpath that runs beneath it beside the river, which is where these were taken. 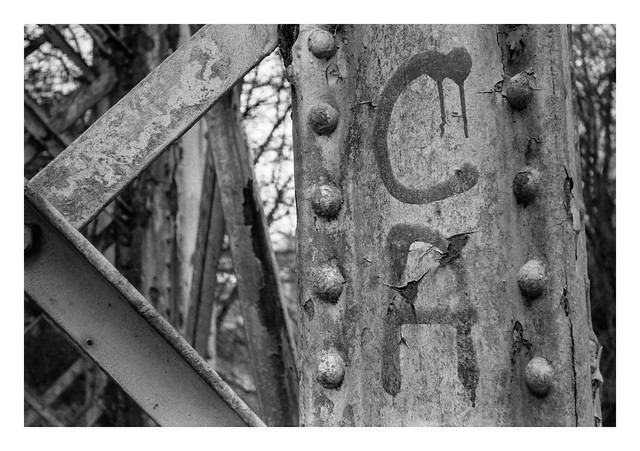 Sheffield, as with many cities, towns and villages in the UK, has a significant number of closed pubs. Whereas pubs in residential areas and the city centre still survive (and thrive) – either due to footfall, location, or by adapting to changing tastes and becoming family orientated pub-restaurants – in places that were once centres of heavy industry, they haven’t fared so well.

The east-end of Sheffield was once carpeted with steel foundries, engineering firms, and manufacturing industry. While this is still the case to some extent, much of the heavy industry has gone and with it the huge numbers of workers keen to slake their thirst after their shifts came to an end.

The decline in this industry has also changed the residential makeup of the surrounding areas. Row upon row of terraced houses that used to house the workers and their families have now either been demolished, of are now inhabited by new generations less inclined to spend their leisure time in public houses. As a result of this, huge numbers of pubs in the area have been closed or re-purposed.

The picture today is of the Sportsman Inn, which is on Blackburn Road in Sheffield. The pub was acquired by Gilmours in 1906, so probably dates back earlier than that. The facade staes 1919, but that is apparently when the pub was rebuilt (perhaps after bomb damage during the first world war?). The pub probably closed sometime in the last five years as the WhatPub site last updated it’s page in 2016, when the pub appeared to be still trading. 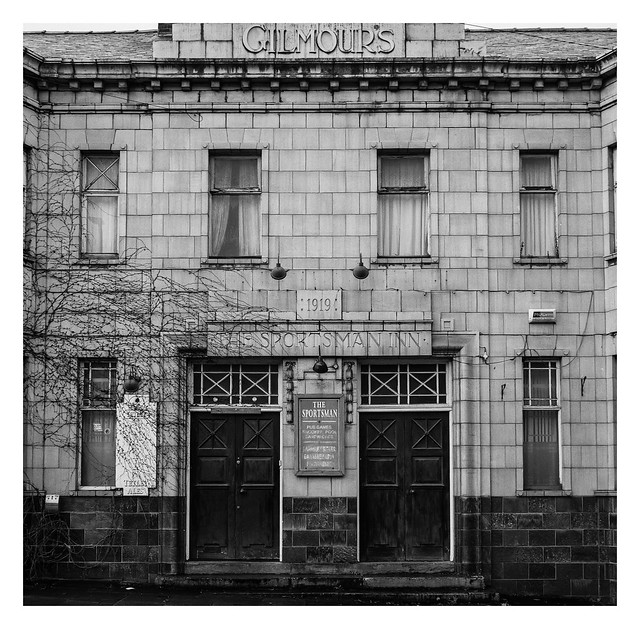 I don’t really have a lot to say about today’s photo. I spotted this abandoned shopping trolley as I was walking back towards Meadowhall after my canal-side walk that I posted about yesterday. It was stuck in the bushes at the edge of this small Tarmac covered area and covered in dirt. I moved it into the clear to get the photo (I returned it back to it’s home in the bushes afterwards though. Unfortunately, and to my dismay,  getting some of the afforementioned dirt on my hands in the process). 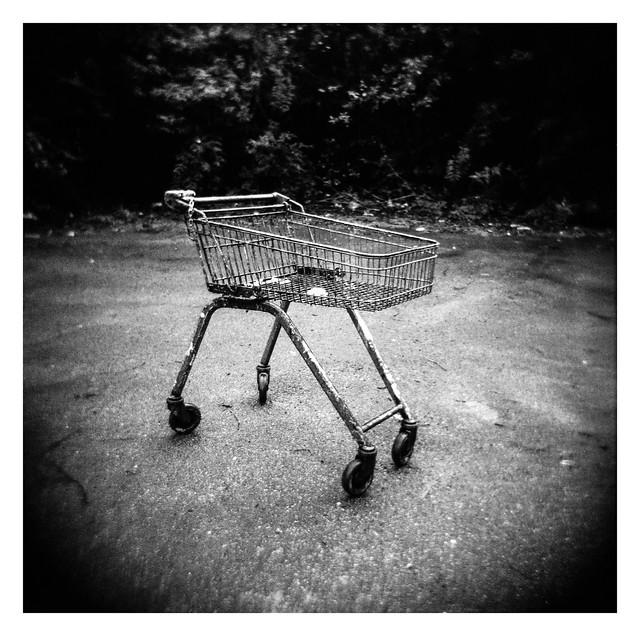