The local lab that I use for developing has re-opened. Well, in actual fact it opened weeks ago, but I’ve only just spotted that the walk-in reception has now opened again too, meaning I can drop off and collect films without faffing about paying (and waiting) for postage.

Given I’ve been developing my black and white film at home since the lockdown took place, it’s likely that I won’t use them as much as I used to, but today I had a roll of Provia 100F to get developed – I don’t have the chems for E6 film, not do I really want the faff of the temperature control involved. I also had a roll of HP5+ that I was going to develop myself but, as I won’t get the chance until after next weekend, I decided to take the lazy option and pay for it to be devved on this occasion.

I’ve not scanned either roll yet, but the Provia shots look nice and, while I’m not an expert at reading negatives, the HP5 shots look good too – something I’m pleased about as I took a few shots without realising I’d accidentally knocked my light-meter’s ASA setting to 800!.  I’ll try scanning both rolls with Vuescan on my Epson this week to see how they compare with my usual Epsonscan process.

Today’s photo is as hot of a building in the city centre. I liked the play of sunlight on the windows. It’s one of a number of photos I made with the 28-70mm Tamron Adaptall lens that came with the OM-2n when I bought it, but it’s quite soft in comparison with my Zuiko lenses, so I think I’ll sell it on. It hasn’t fared too badly with this scene though. 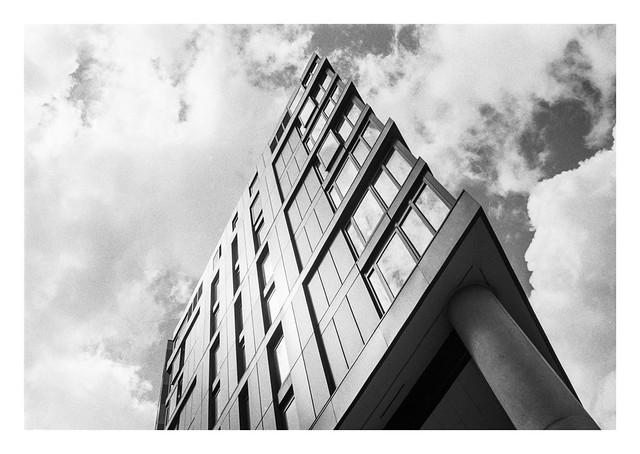