One of the significant changes due to the UK lockdown was the closure of non-essential retail. The local shopping mall, which has a large selection of stores, including big-name reatil outlets, a market hall, and a variety of other independent traders, has been largely shut down as a result. The two photographs posted today were made while queueing to get into Wilkinsons, a store permitted to open during lockdown. I think I went in to buy some anti-viral disinfectant wipes.

As the store was operating the now-familiar system of only allowing a limited number of customers inside at any one time, the queue stretched past a number of other, closed, shops, including ToyTown, where a large plastic knight seemed to be guarding against unwanted intruders. 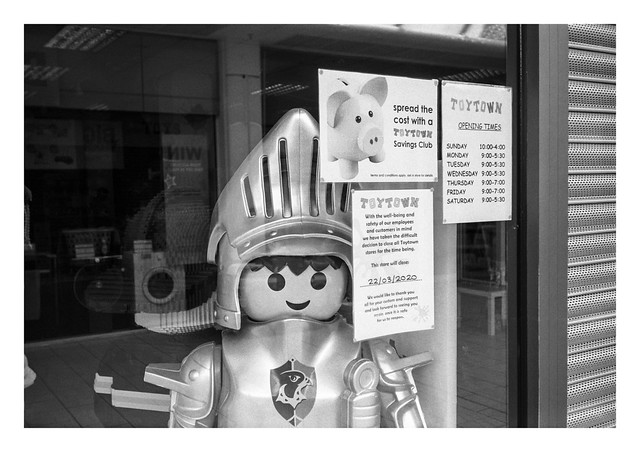 Once inside Wilkinsons, my route through the store took me down the confectionery aisle, where I noticed the locked down pick’n’mix sweets and made the second picture.

These photographs were made almost six weeks ago now and the UK government have announced that non-essential retail can re-open for business (with social distancing precautions in place) on 15 June. Some members of the government’s own advisory council, SAGE, have warned against this (and other loosening of restrictions). The country is still recording 8,000 new infections each day and the R number is hovering perilously close to 1 (if it goes above this it indicates that each infected person is passing on the disease to more than one other person, which means the numbers of infected will increase). My fear is that the loosening of measures is premature and being done for political reasons, not public health, and that we could very well be paying the price for it before long. 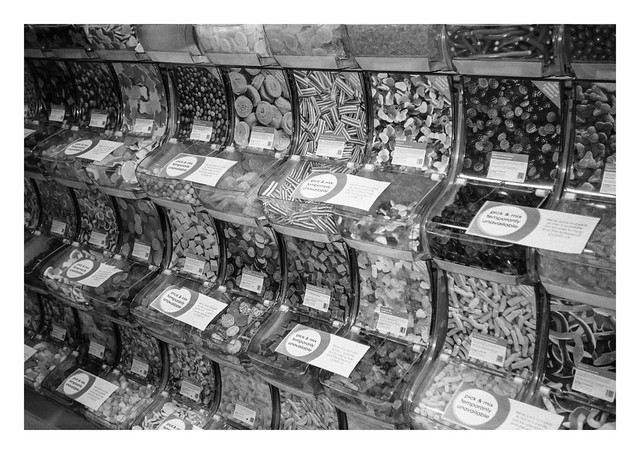