Do you ever have those times where the creative urge just strikes? Times where you need to make a photograph even though you can’t go out and there’s nothing much to photograph indoors but your eye catches something and you just think “Yeah, that’s a picture.“? Well, today’s photograph is from one of those times.

I’m not sure whether I was just in a trigger happy creative flush, but something made me get the shot. The subject is a half-full glass of (flat) cola sat on the cabinet where my printer sits (and which has some books and other gubbins perched atop it too). The glass has been through the dishwasher on multiple occasions, and it shows. What was once clear is now permanently etched by the washing process, leaving a finery of scratches across its surface. I think it was these bright marks highlighted against the darkness of the beverage that made me think there was a photograph waiting to come out.

The Bronica and the 75mm Zenzanon have made for a sharp image and the Fomapan 100 (this is the first roll of this emulsion I’ve home developed in the DD-X I use) has produced lovely tones. It’s probably not a photo that anyone would ever want on their wall, but I’m quite struck by it for some reason. Mundane for the win once again. 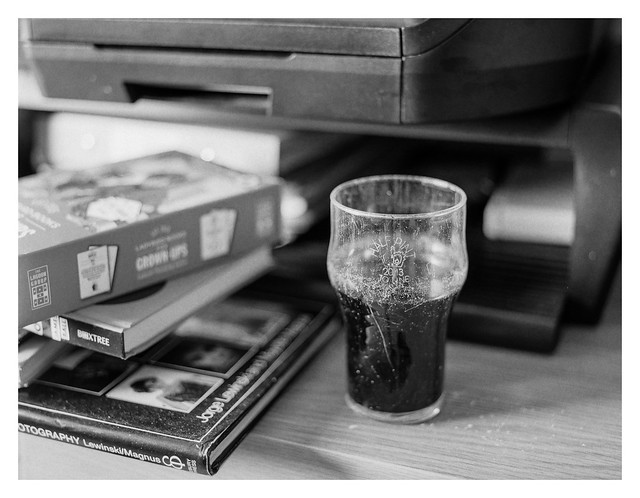 4 thoughts on “A quarter pint of cola”