Yesterday evening, after I finished work and had something to eat, I decided to go for a walk. Despite dry weather throughout the day, it had begun raining shortly before and, for a while, I thought I might have to put the walk off for the day. I don’t mind walking in the rain, but this would have soaked me through.

Looking to the west though, from where the clouds aere approaching, the sky was brighter, so I took the decision that the shower would soon abate and so went to put on my coat and walking boots. By the time I was ready to leave the house the rain had all but stopped.

I’ve not walked around the nearby Rother Valley Country Park since before the lock-down took place, mostly because I expect it to act as a magnet for joggers, cyclists and other people taking their allowed exercise. Yesterday, however, I thought the rain might have put people off and that it would be mostly free of people.

I planned out a route in my head that would take me along the main lake, past the smaller lake, then over a footbridge across the river. The path here would follow the river, then cross back over where it met the railway. Frome there I could use the footbridges across the railway tracks and head back into the houses and back home. A distance of around 2.5 miles.

I took my Pentax P30T fitted with a Rikkenon 50mm f/2. This aperture priority SLR is compact and light, and would do the job for any opportunistic photos that might present themselves during the walk. I made a number of pictures while out, but I began to realise that I wasn’t really feeling it and that the images were for the sake of it, rather than from my seeing something that might make a good photo. I may yet surprise myself, but at present I’m expecting these to be lacklustre photos when I finish the roll and develop them. Hopefully my next opportunity to grab a few pictures will see me in a more inspired frame of mind. Nontheless, if any of yesterdays photos have merit, I’ll post them here when I’ve developed the roll.

While I can’t in any honesty say that the lockdown is particulalrly taxing for me and my family at present, five weeks in and I’m really craving the ability to just go somewhere different, or at least to be able to go out for the sheer pleasure of it rather than the focus being primarily on getting some exercise.

Today’s photograph is of some boats and barges moored up on the River Calder close to The Hepworth. It’s a slightly odd composition – mostly because it was the only location and angle I could use to make the shot. 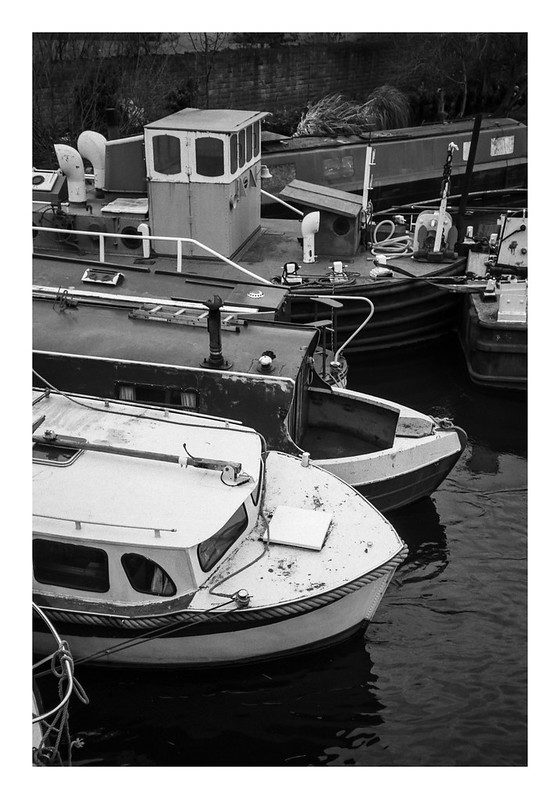 2 thoughts on “Making photos in the wrong frame of mind”