On Saturday I wrote a little about how there seems to be some sort of landscaping work taking place in the trees and scrubland close to the Trans-Pennine Trail. One of the things that seems to be a part of this is the clearing of undergrowth from an old brick-built bridge. Until a few weeks ago, and despite my having walked past not fifty yards form where it stands, I had been completely unaware of its existence.

Well, I say completely, but there was a clue to it’s existence – a ridge of earth mostly covered with large shrubs and small trees was visible from the nearby footpath. I’d noticed this before and on one occasion even battled part way through a field full of brambles to try and see if it was an overgrown spur of the path or something. However, after getting scratched by the undergrowth, I retreated, the mystery unresolved.

Now, however, a freshly raised fence has become visible, so I decided to take another look. I was pleasantly surprised when I founf the aforementioned bridge. The bridge has a fair bit of graffiti applied, and there’s a significant number of beer cans beneath the central arch, so I’m obviously not the first to come across it (and I doubt the people who erected the fence were the ones to have thrown all the beer cans under there – the fence is way too straight for that! :)).

The bridge is almost certainly a remnant of the coal mining activities that once covered this area, and it would be interesting to dig out an old map of the area to see how he lay of the land was presented in the past. For now though, here’s a view of the bridge looking from the south-west. 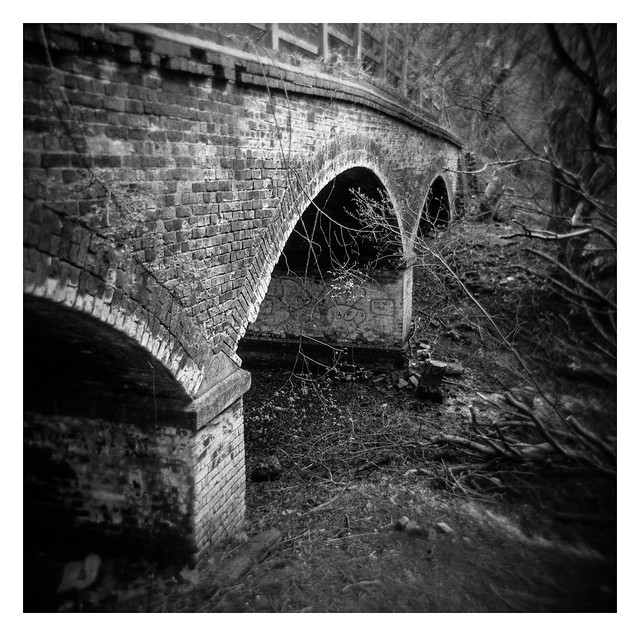 One thought on “A southerly view of a hidden bridge”