It’s now been a week-and-a-half since the COVID-19 lock-down measures were put into place here in the UK. So far, things are ok – as a full-time home-based worker, I’m used to not leaving the house to commute to work, and social-distancing from my colleagues is the normal state of things anyway apart from when we have face-to-face meetings (which are all stopped now in any case). As a result, the lock-down measures are not inducing any sort of cabin-fever at this stage.

I must confess however, that I’m missing being able to go out where I want. I’m taking walks most days to get some exercise and fresh air, but even places that would be just a short drive away are starting to feel like slightly exotic destinations. The thoughts of driving out into the countryside (or even just into the city centre) are tantalizing given the “so near, yet so far” forced remoteness of even relatively mundane destinations. I’m estimating that the current lock-down will last through to the end of May at the earliest, so a good eight more weeks of this yet.

Still, things could be worse – returning home from my walk this lunchtime one of our neigbours, who has two young children, was out on his drive cleaning the paving. I said “Hi” (from a safe distance) and enquired as to how they were all doing. “I’m sick to death of watching Frozen” was one of his responses…

Another photo from The Hepworth today. I didn’t have high hopes when I took this picture as it was very dimly lit in this part of the gallery (to protect the prints and other artwork on display), so I had to shoot it wide open at f/1.7 at 1/30sec. I was expecting camera shake, but it’s nice and sharp, even if the shallow depth-of-field has rendered the man slightly out of focus. 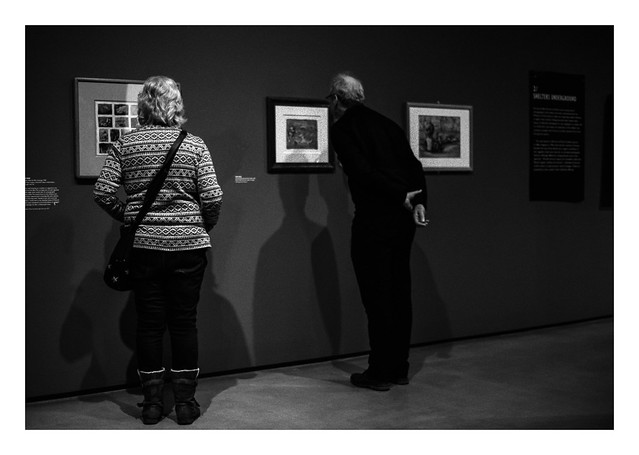 One thought on “People and shadows in a gallery”