A couple of photos today that I took while walking on the moors around Over Owler Tor / Higger Tor / Carl Wark  last weekend. I actually shot a couple of rolls – one Delta 400, and one Shangha GP3 – but I’ve only scanned the Delta so far.

I made a concerted effort to remember to use the mirror lock-up on the Bronica this time – a roll of Velvia I shot recently had resulted in a number of shots that were less sharp than I’d hoped, which I’d put down to camera shake caused by mirror slap. All the shots this time were nice and sharp – even those shot at slow shutter speeds (half-a-second and the like). The only downside was my lack of experience in shooting the camera with the mirror locked up. The process is:

If you forget stage 4 and wind the film on, the mirror remains in the locked up position until you take another shot. As a result of this I had a few double frames where I had to take a second, identical photograph (although I altered the aperture in some cases just for the hell of it) as it’s imposible to recompose while the mirror is up.

Anyyway… here are a couple of images of Mother Cap, a gritstone outcrop just below Over Owler Tor in the Peak District national park above Grindleford. It doesn’t look too big in the first image, but it’s a decent size when you’re up close – being maybe 20-25 feet high. The guy at the left of the frame was taking his own photos of the rocks when I caught him up, and was interested to see the view through the Bronica’s waist-level finder.

The second shot is a close-up picture of part of the the formation – this is the actual angle that the layers are at. 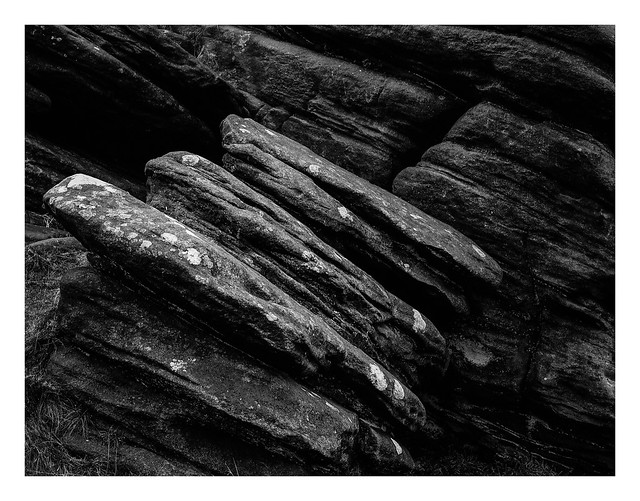