In yesterday’s post I mentioned some of the attractions at Queen’s Park in Mablethorpe. One of those was the crazy golf course. It’s one of (I think) three courses in Mablethorpe. the other two being at the other end of the sea-front. All three courses have been there as long as I can remember – so since the 1970s at least – and most likely they were around for some time before too. All three have seen changes and updates.

The northernmost course was, for many years, an Arnold Palmer’s branded course.

There were a number of these Arnold Palmer courses at various seaside resorts around the country. These all had full branding in place with brightly painted red and white obstacles (most of the ones I visited had a windmill with spinning blades to putt your ball past) and professional-looking felt “greens” upon which the ball would roll smoothly and with precision. At the end of the course, the final hole gave a chance to win a free game if you got the ball in a central hole (which would ring a bell, alerting the staff to the fact). Missing this target would result in your ball being lost down an alternate, prize-less, chute and your game would be over. I still have a free game pass in my wallet that I won sometime during the 1990s. Alas, the course at Mablethorpe is under different ownership now (although it still looks pretty snazzy with it’s new pirate themed looks)

The other two courses had a more independent feel to them. The central course had obstacles that felt homemade, but inventive nonetheless, with a variety of brightly painted bridges, pipes, and chutes to get your ball through. The southernmost course always seemed the more basic of the three, less fantastical in nature and almost akin to a pub-game with pegs, chicanes, and barriers making up it’s obstacles (and there’s a part of me that remembers it having concrete “greens” too, upon which your ball might be prone to sudden disruption, although this might just be down to a faulty memory circuit).

Today’s picture is of this southernmost course as it is today, still in use (although not when I took my photo). Long may it live. 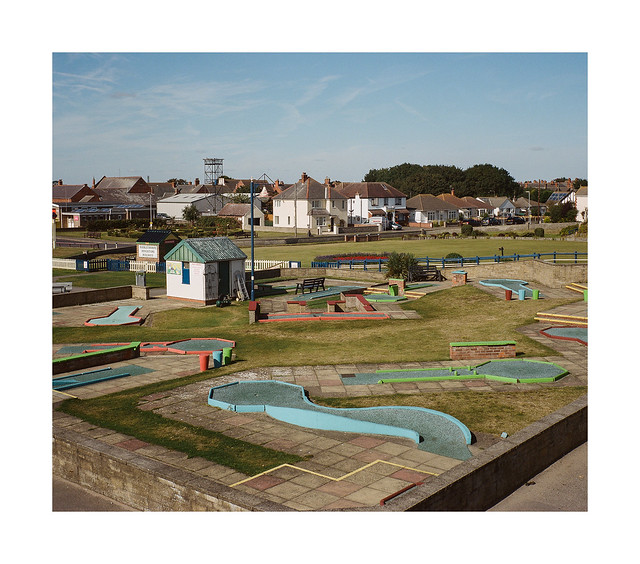 One thought on “Crazy golf”