Oh well, the sky hasn’t fallen down as yet, so I guess my self-imposed “at least one post a week” wasn’t the be all and end all (after all!).

Anyway, I’ve still got quite a mountain of pictures to post – even though, until the weekend, I’d had a break of a couple of weeks without taking a single photograph – so here’re a few more. These were all taken during the day-trip to York that I’ve already posted about, but were on a second roll of film that I didn’t finish on the day. There’s no particular theme, just a selection of things I though might make a decent picture.

These were all shot with my Olympus OM-1 on Ilford HP5+. I used the F.Zuiko 50mm f/1.8 for some, and a Hoya 25-42mm wide-angle zoom for the others. I got both lenses with the camera but, despite its wide-angle versatility, I’m not keen on the Hoya – it’s very bulky and heavy and the image quality isn’t a patch on the F.Zuiko. I’ve flagged the Hoya shots with a (H).

#1 – This was taken on my way back to the town centre after the morning’s visit to the National Railway Museum. I hung around at the edge of the street to get someone reflected in the puddle. I took two shots, but this is the best. 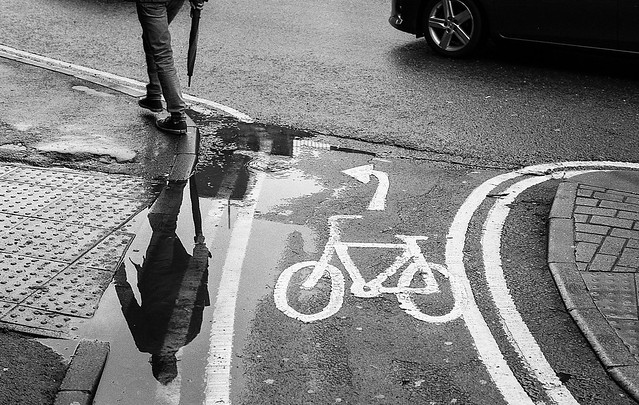 #2 – Despite their poorer image quality, I still like a few of the Hoya shots, including this one (H). 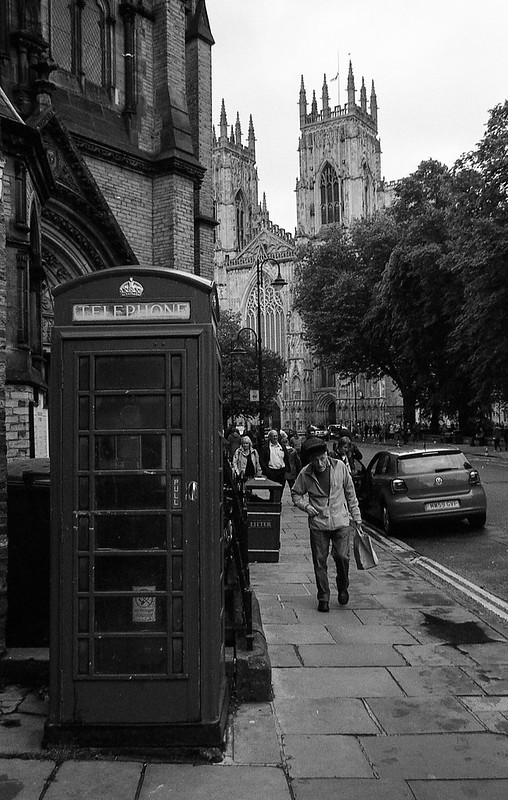 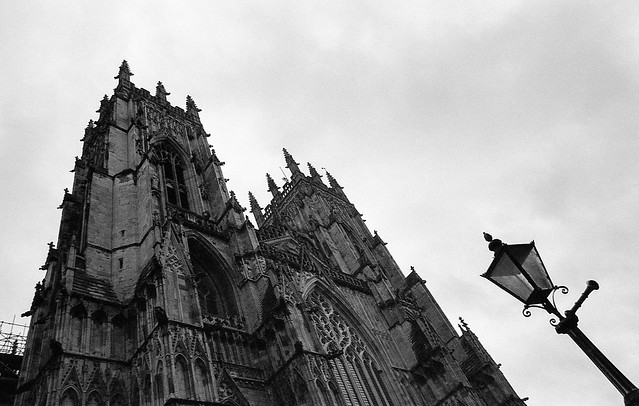 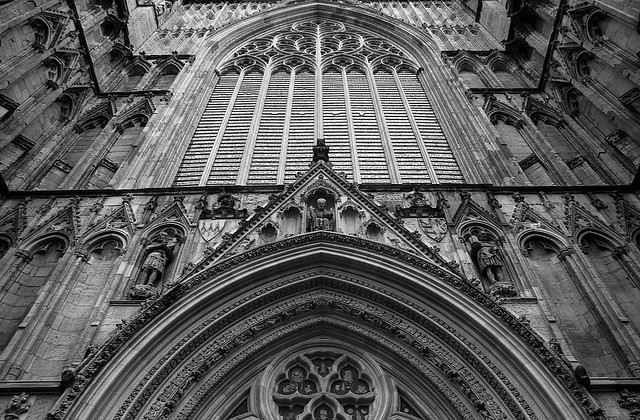 #6 – And again. I like the juxtaposition of the old Roman column against the more modern cathedral here. I couldn’t have taken this without the wide-angle (H). 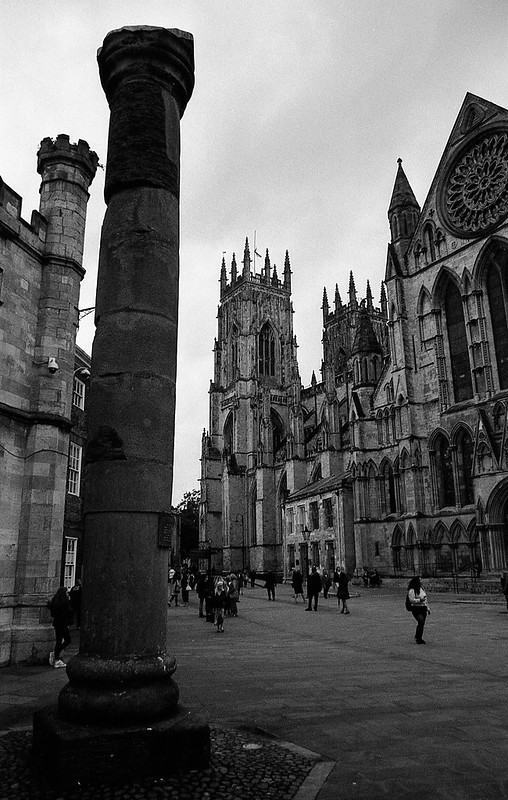 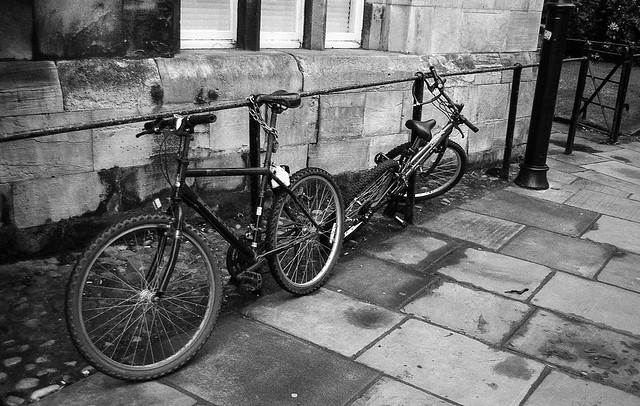 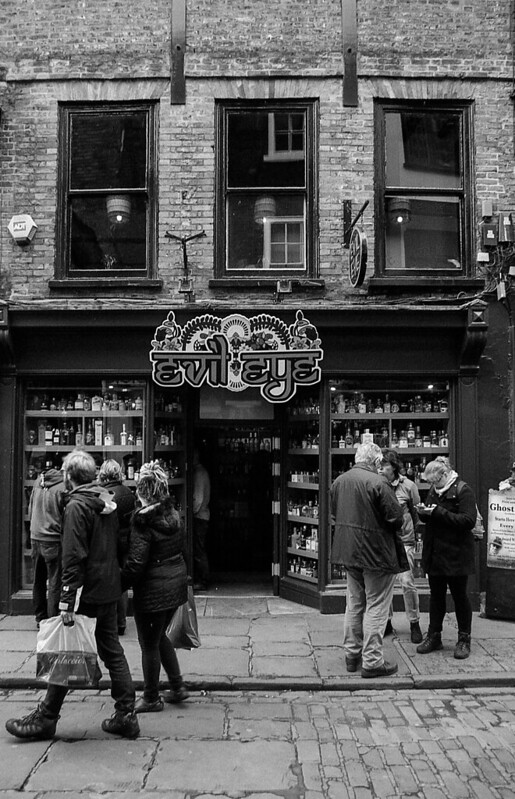 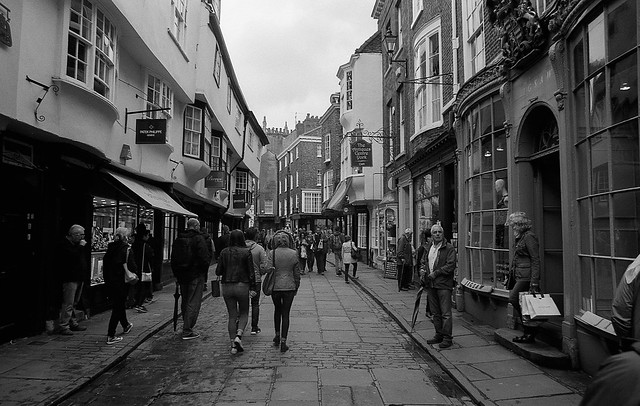 #10 – York’s famous medieval shopping street. the Shambles, some of the buildings here date back to the 14th century. It gets its name because it used to be the home of a large number of butchers’ shops (shambles being an old term for open-air butchers and slaughterhouses. 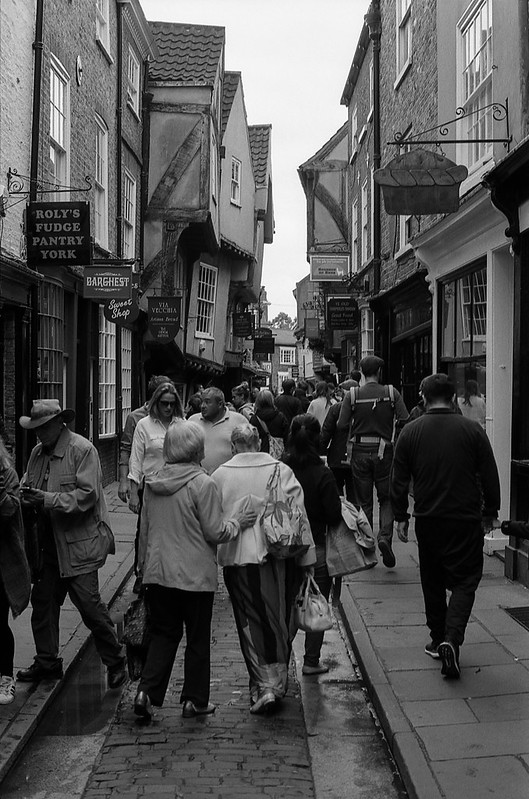 #11 -And York’s famous tea-room, Betty’s (there’s another branch in Harrogate, which I think is the original). There was a sizeable queue outside each time I passed by. 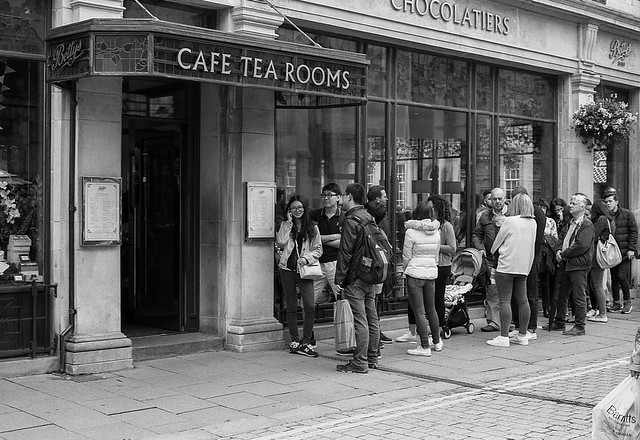 #12 -Finger-puppets for sale on The Shambles. 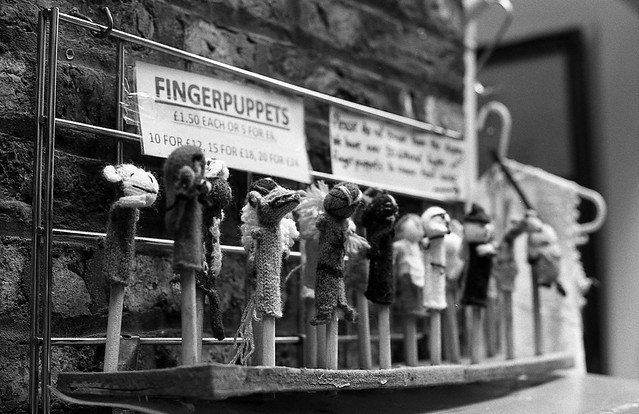 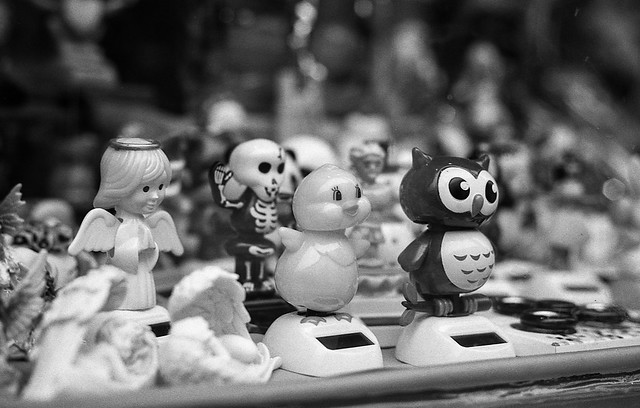 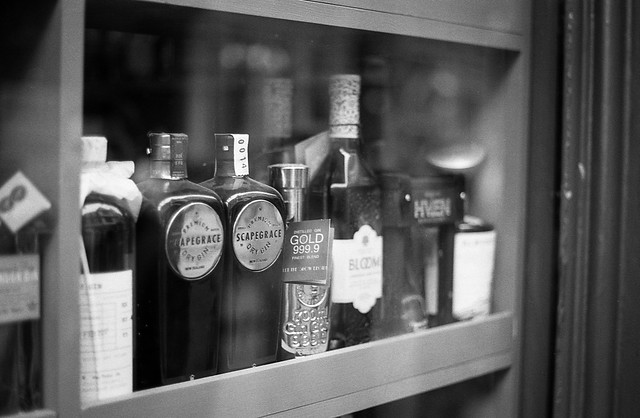 #15 -There was a sizeable international food fair taking place on the day, with loads of stalls, but the only one I photographed was this sausage stand (which might be there all the time anyway for all I know). 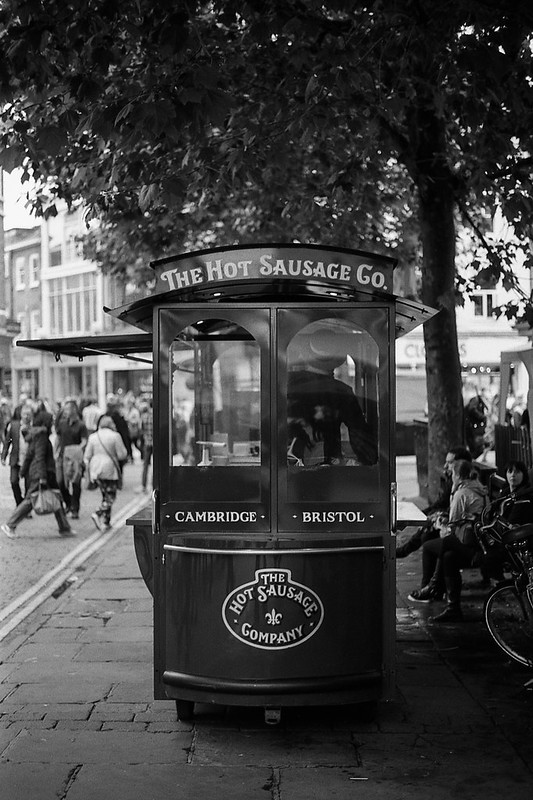 #16 -The old BT piper logo was still in evidence on these payphones. 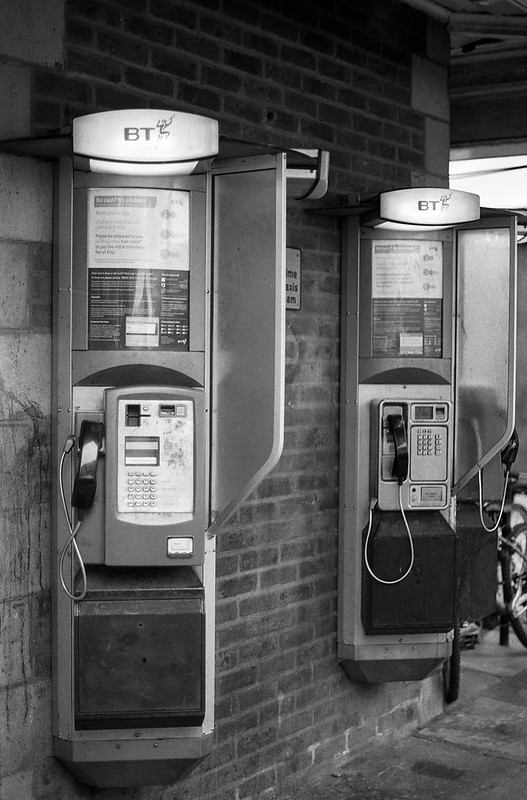 #17 – This is my favourite shot of the bunch. I spotted this trout’s expression on a fish monger’s stall. 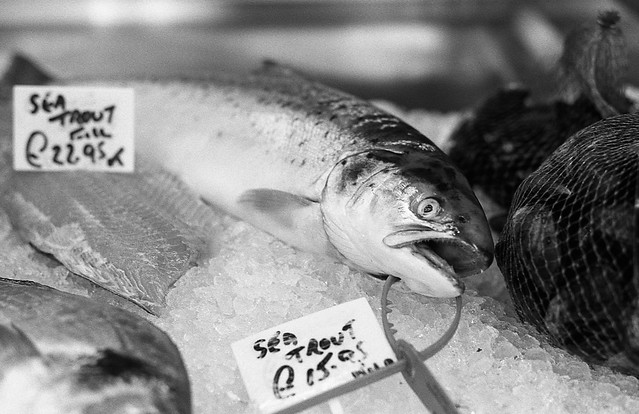 #18 – Another bicycle. The city being relatively flat, bicycles appear to be a popular form of transport in York. 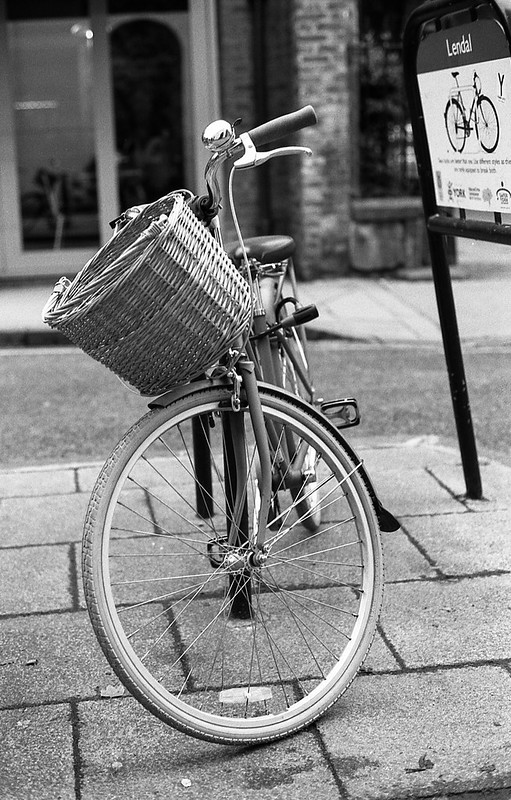 #19 – Not sure if these stones mark actual graves any more. 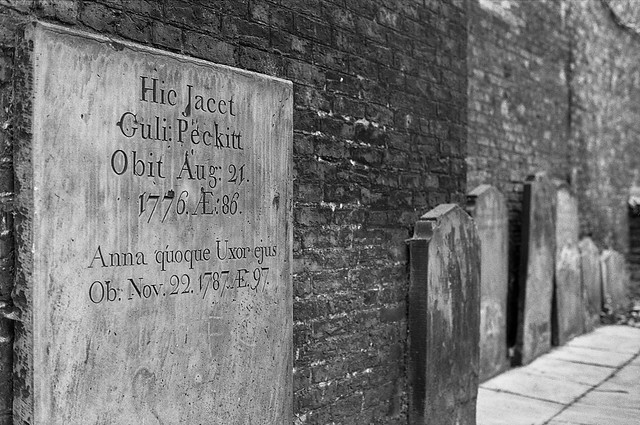 #20 – And the final shot of this batch, a small alleyway just off Stonegate. And another of the shots I quite like. 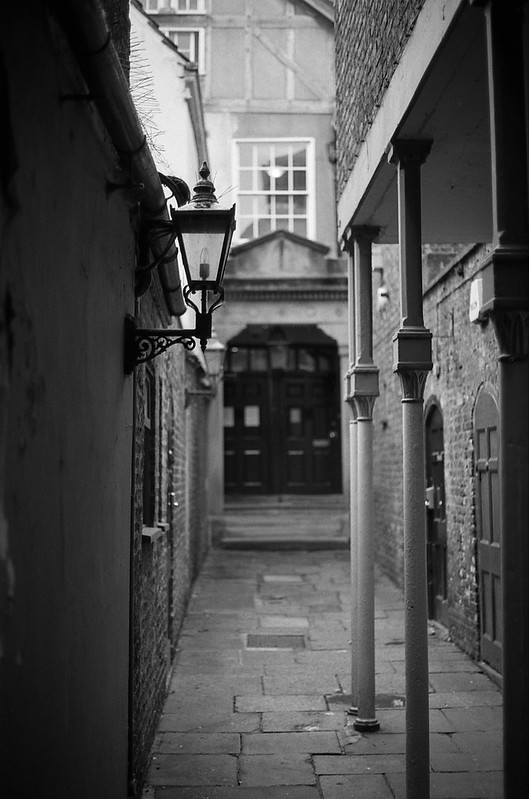 It’s a shame the weather wasn’t better on the day – there are untold numbers of things to photograph in York, and the place is well worth the visit.

One thought on “So much for at least one update a week!”