I went to Cleethorpes last Saturday. This was just a family day out, not a planned photography trip, so I’d prepped myself for the inevitable shots I wouldn’t be able to take due to not wanting to inconvenience my wife and children. They never complain about me taking pictures but I nonetheless have a strong sense of self-imposed guilt that I’m spoiling everyone else’s day by constantly stopping to take shots. This is compounded by a frustration when I see a good shot, but don’t have the time to do it justice – I can’t very well expect them to hang about for 10 minutes until the sun emerges from a cloud or something (well, I could, but I don’t, because that would be a bit selfish). So, these things considered, while I still take a camera on these excursions, it’s a secondary thing and I’ll get photos if I can, but not at the expense of the family trip.

The day before our visit had wonderful weather – bright blue skies with lots of cumulus clouds to add a splash of interest. As expected, Saturday dawned to a fug of thick overcast cloud stretching, seemingly, across the entire country. Oh well, such conditions are part and parcel of living in the UK. It did mean we packed some extra coats in the boot of the car, and I decided a 400 speed black& white film would be the best choice for the day. As the only such film I had to hand was a roll of Bergger Pancro 400, that was what it would have to be. I’d never shot this film before and had read that it was quite a ‘flat’ film, with low contrast, although that wasn’t really backed up by my results, all of which had plenty of contrast, even before any post processing on the scans.

The route from home to Cleethorpes is relatively painless, being the only close(ish) seaside town that can be reached by motorways and main roads for almost the full run, and it took a little over an hour to make the journey. The weather was no better there than at home, plus it was a good few degrees cooler to boot (not that the temperature put off a few hardy souls who braved the beach and let their kids paddle in the frigid pools left by the receding tide!), and we had no difficulty in finding a parking space. I’ll not go into the full day’s events, other than to confirm that cafe’s were visited to ward off the chill, fish and chips were consumed (this is THE LAW) and ice-creams were had (in clear contravention of the warming beverages we’d sought earlier). Oh, and pictures were taken. I didn’t manage to shoot the whole 36 frames, but only went home with about half-a-dozen to spare, all of which I shot over the remains of the weekend.

I ended up getting quite a few decent shots from the 36. Not living too close to the coast means that there’s always a novelty to shooting the traditional seaside-type subjects – beaches, piers, arcades, funfairs, seaside shops and cafe’s etc, and I managed my fill on the day.

I’ll add a few to this post, and them add some more in a follow-up in a few day’s time. You can see all these in higher resolution by clicking the images.

The first four shots are of the pier, two from the promenade, one from the beach, under the supports, and the last from atop the pier itself. The film shows a lot of contrast and grain in these shots, and I like the results. The picture of the two people is one of my favourites, but I really wish that bin wasn’t attached to the railings! 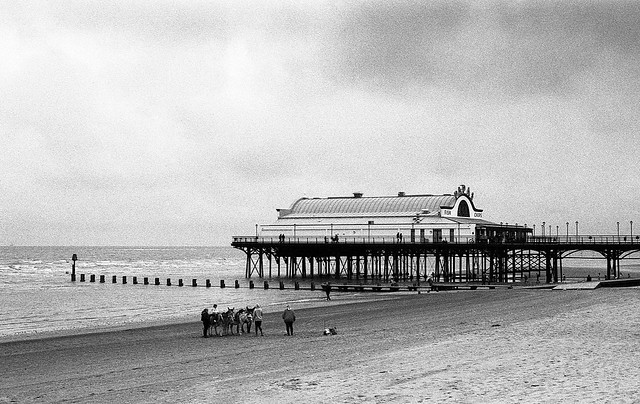 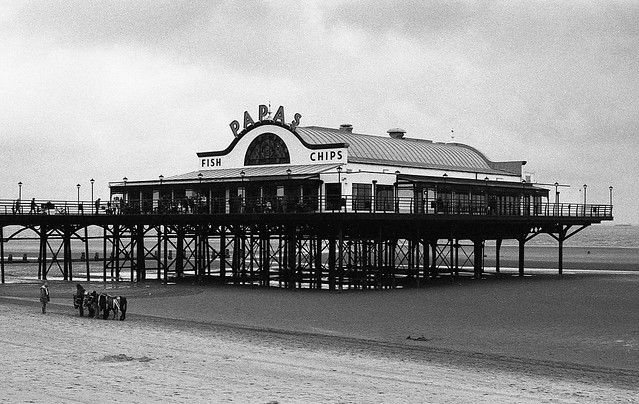 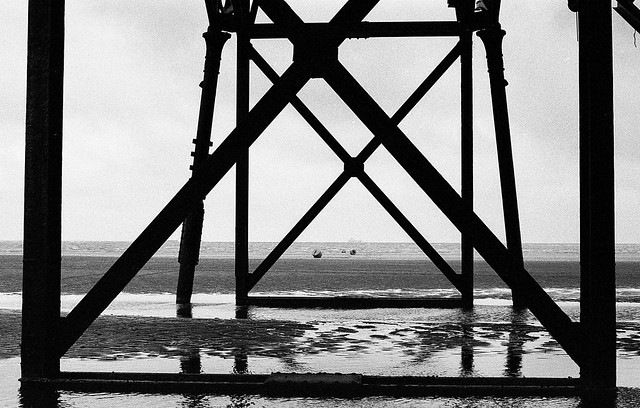 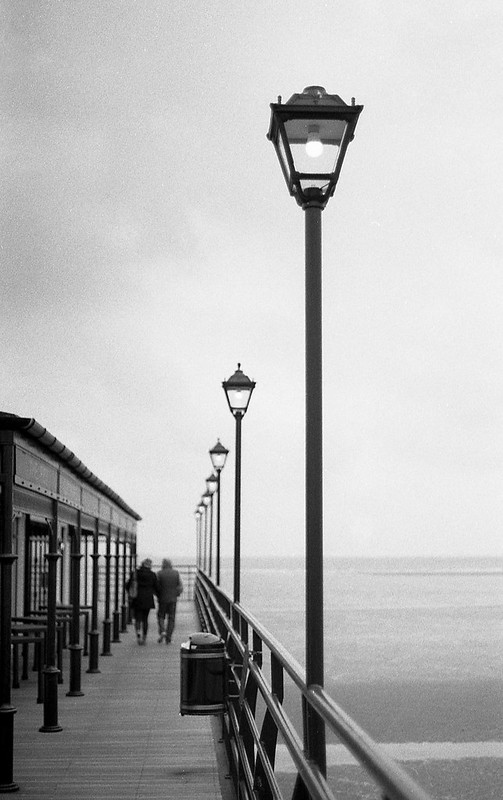 Here’s another shot from the beach. Nothing fancy, but I like the way the tracks lead you through and out of the scene. 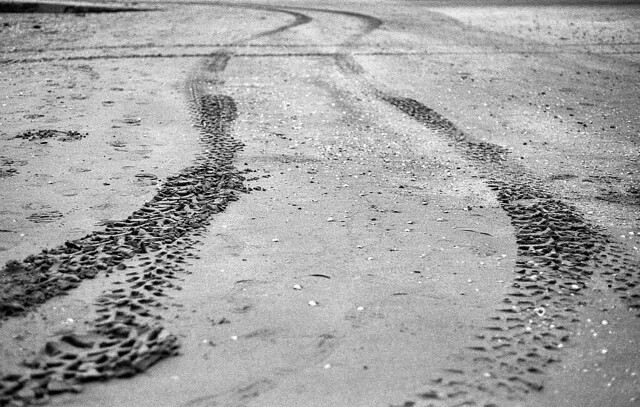 And finally three pictures of seaside ephemera. The hotdog dude is my favourite of these. 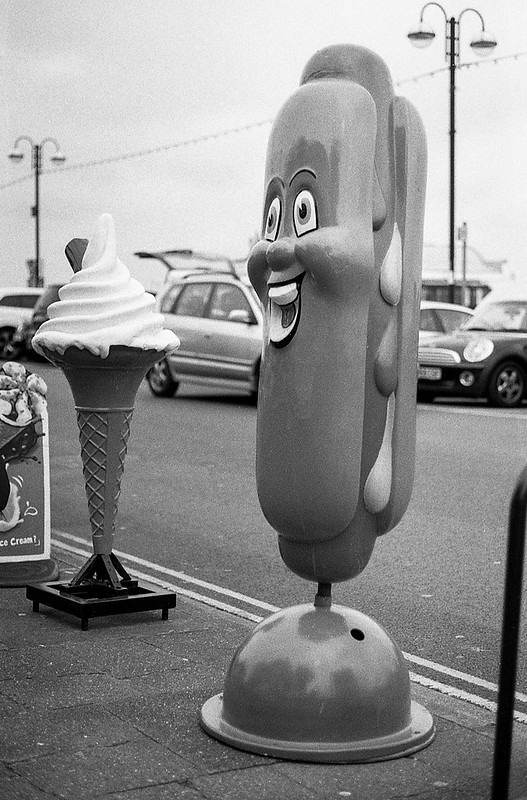 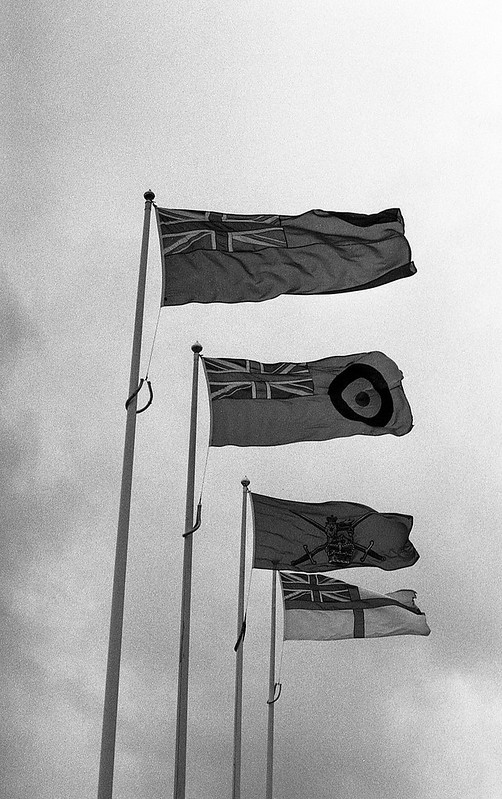 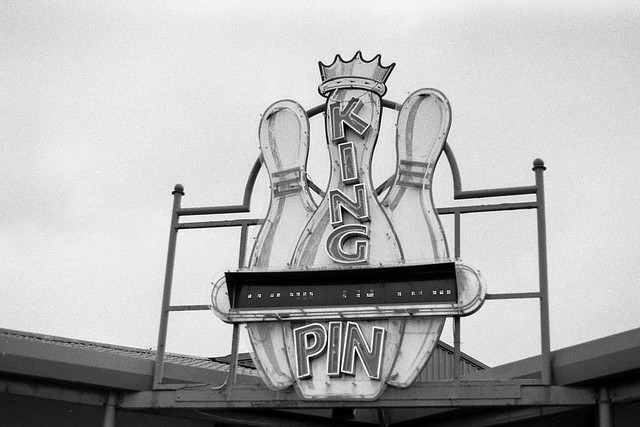 The rest of the shots from the trip are mostly from the beach, some of which I like a lot, so I’ll post them soon.