I shot a couple of rolls of film over the past weekend and I’m writing about them in reverse order. On Saturday I shot (most of) a roll of Bergger Pancro 400 with my Pentax P30T – I’ll post something about that in the coming days – and on Sunday a roll of Fomapan 200 with the Yashica Mat 124 G. It’s that roll that I’ll talk about here.

I didn’t have any specific photography plans in mind for Sunday – my wife had gone out, and I was dependent on my eldest being around to look after his younger brothers if I was to venture anywhere. I was also in two minds as to whether to just laze around the house and watch TV – I’d recorded the documentary film, Finding Vivian Maier, and was planning on watching that at some point.

In the end I watched the film in the morning after my dad left following his usual Sunday visit, did a few chores, and then decided to go out upon seeing that the cloud cover had broken up and there was some decent light.

My destination was Roche Abbey, the ruins of a 12th century Cistercian monastery that lies in a pleasantly landscaped valley just to the east of Maltby. It’s about half-an-hour’s drive and I’ve visited the place once before in 2003 back when I had my first ever digital camera – a Fujifilm Finepix A204 compact, capable of a whopping 2 megapixel resolution! I mock it, but I still have the camera in a cupboard, and it still works ok, and I was very happy with the shots it took at the time. In fact, here’s one of the shots of the abbey I took with it back then:

The weather on that day in 2003 was very pleasant, and I visited in the morning with the sun rising up behind the remaining standing structures of the abbey. This time, the weather was against me to some extent, and despite the location not being too far from home, the cloud cover had thickened by the time I arrived, covering the sky with a largely featureless grey blanket. Oh well, not what I’d have chosen, but not the end of the world.

The abbey is down a small, cobbled lane that descends into the valley, and which didn’t seem to do the car’s suspension a great deal of good, but at least there was parking space at the bottom. There also seemed to be some sort of organised foot-race / marathon taking place as there were numbered runners passing by frequently and, in the old, vaulted gatehouse to the abbey, there was a table set up for them to take drinks.

The entrance to the abbey grounds themselves are via the Abbey House. The abbey is managed by English Heritage and a fee is chargeable upon entrance through the house (which also doubles as a gift shop and small museum). I became a member of English Heritage a couple of months ago when I discovered upon arrival that my impromptu visit to Bolsover castle would cost me over £10 to get in, and so I decided to instead pay the £50 one-year membership fee and try my utmost to visit other EH sites and get my money’s worth throughout the next 12-months. This visit to Roche Abbey was the first trip to recoup some of the investment.

For visitors not willing to pay the entrance fee, the Abbey structure can be seen easily from a public footpath running alongside the property, albeit behind a metal fence. This doesn’t allow you to get in amongst the ruins though, and probably doesn’t give you the nicest vantage points.

Anyway, I shot the full roll of Fomapan 200 (bar the last frame) during my visit, including a shot of the Abbey House, three shots of the main towers, one of the sluice that runs through the grounds, and a number of shots of memorial benches and signposts. The last shot was of one of the runners approaching along a curved track as I was returning to the car, and then I finished the roll with a photo of a potted Rhododendron plant in our back garden. It wasn’t the most productive of rolls I’ve shot, with seven of the pictures being keepers (again, your definition of a keeper may differ from mine!), and the others being a little humdrum – the shot of the sluice doesn’t really work, as does one with three benches in the frame, and the shot of the runner isn’t great either. The Rhododendron is, well, a shot of a potted rhododendron, so make of that what you will, but I’ve not included any of these pictures here (although it’s possible that some of them will go on my Flickr stream at some point).

This was my first roll of Fomapan 200 (though I’ve shot the 100 variety in 135 format before) and I’m happy with the results. The negatives are very curly though, and I did notice a large number of scratches that I’ve had to try to remove in post-processing. I’ve not really encountered this sort of scratching on other rolls I’ve shot, so think it may be the film, rather than the camera or lab (Peak Imaging, who always produce great results). A search online revealed that I’m not the only person to suffer from this. None of the scratches were sufficient to detract too much from my amateur shots though.

So, without further ado, here are the ones I like the best…

#1. This is the Abbey House as seen after you’ve entered the grounds. You come out through the lovely old studded door you can see in the picture. 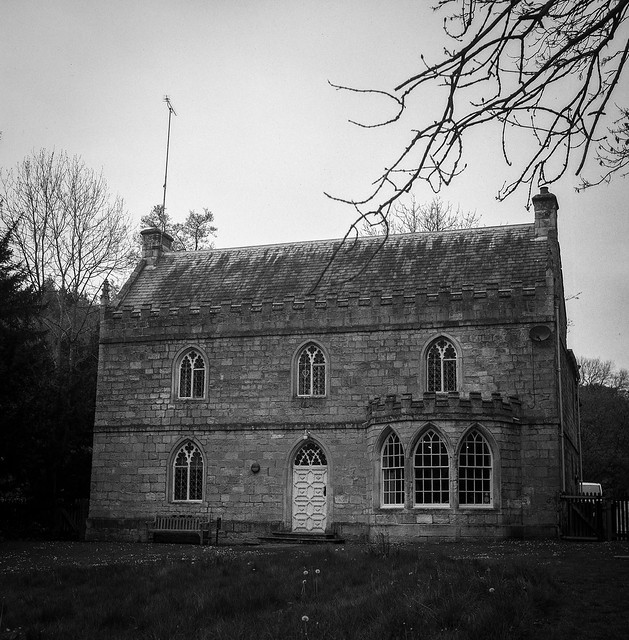 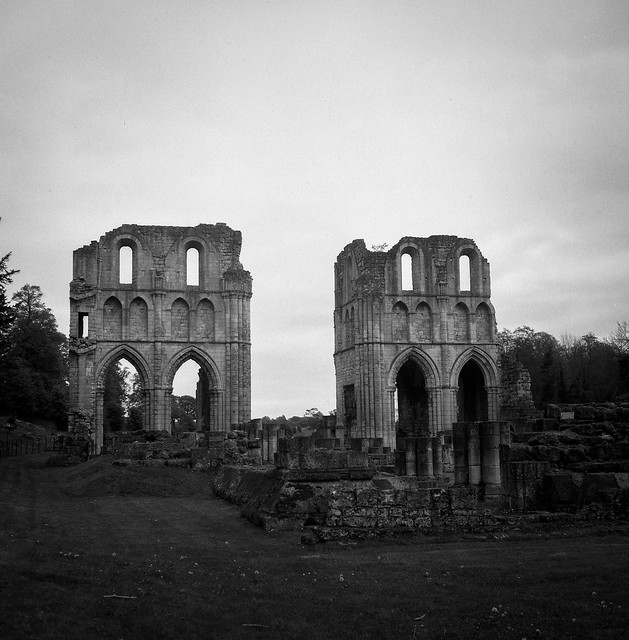 #3. The southern tower. I’d not intended to get the OOF foreground in shot, but it was a result of the parallax difference between the viewing and taking lens of the camera. I don’t mind the effect though as I think it gives the shot a nice sense of depth. 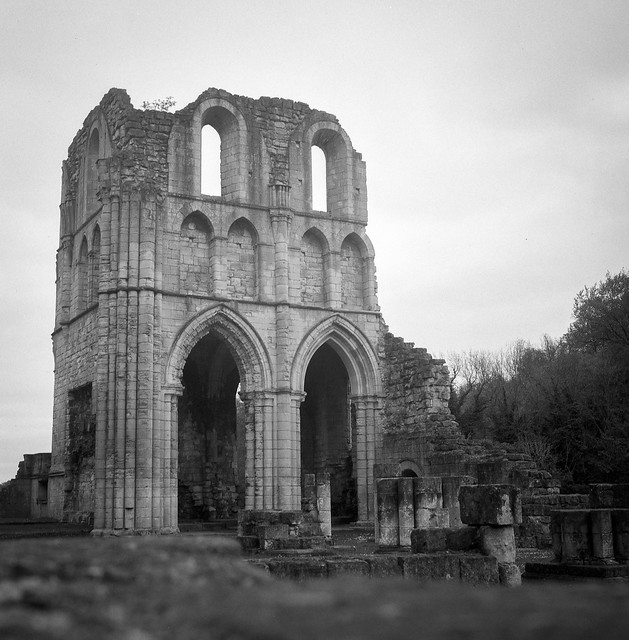 #4. Another shot of the southern tower, but this time with the focus on foreground stonework. I like how the sprinkling of daisies stand out in the black and white of these shots. 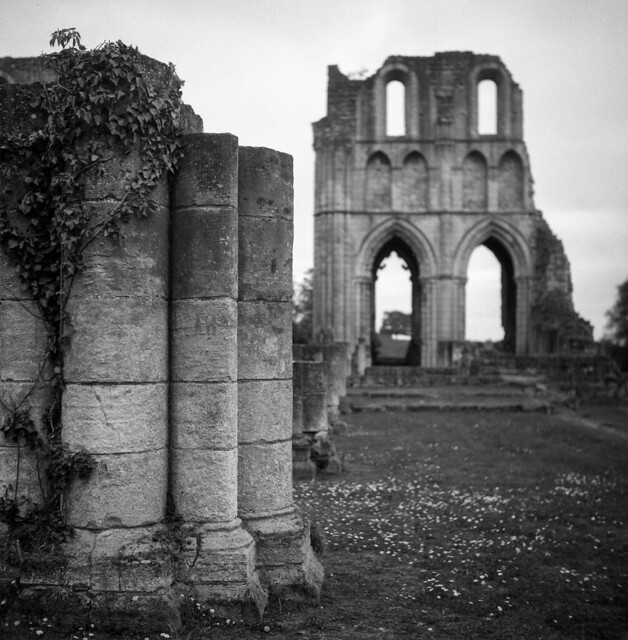 #5 & #6. A couple of the memorial benches under the trees to the west of the abbey ruins. I really like the second of these two, again because of the daisies giving interest to the foreground. 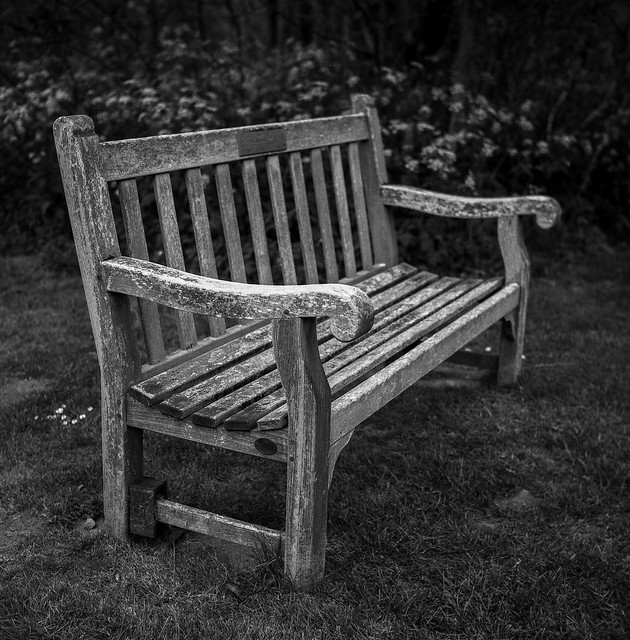 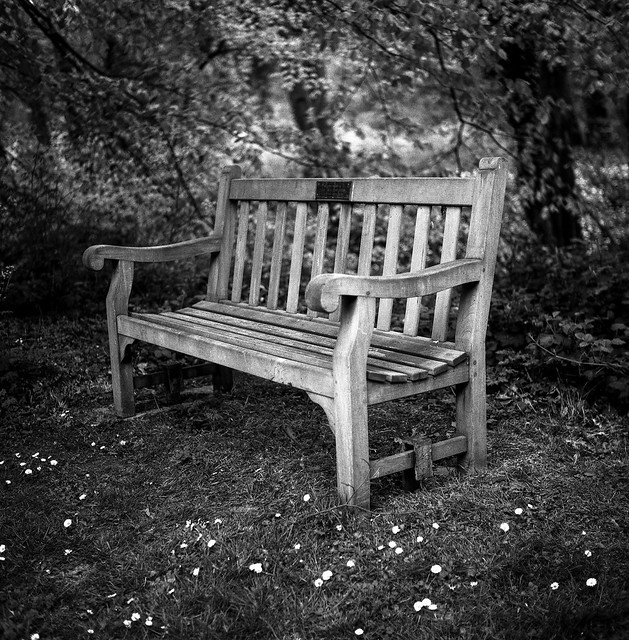 #7. A warning sign stood amongst a morass of nettles highlighting the sluice that flows just behind them. 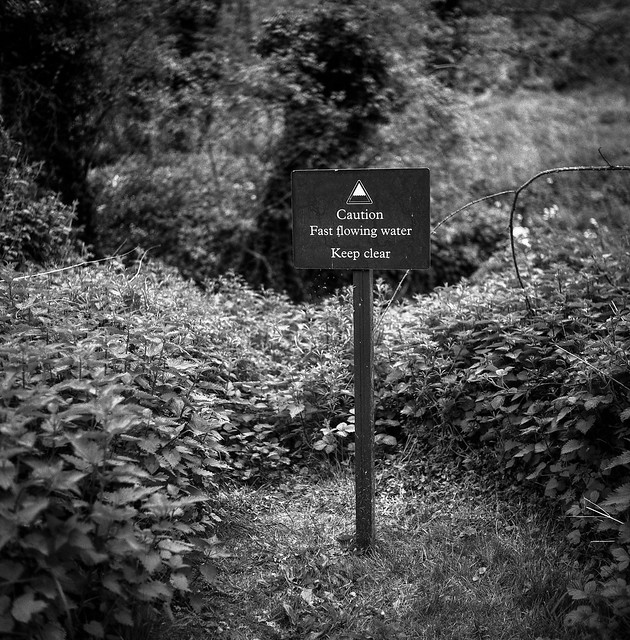