I’m still loving the Yashica Mat 124 G and, as I had a brief window of time before attending an appointment I’d taken the day off work for on Wednesday, I decided to go out. I only had around 90 minutes to spare, so didn’t venture far, but there’s a variety of footpaths and tracks in the area that would offer some opportunities for photographs, plus the weather was nice and bright which might make for some contrasty shadows even though the sun was riding fairly high by this time of the morning.

I decided to waste no time by walking to the area I planned on visiting and instead drove the car the mile or so to where I planned to start my walk. I parked up in a small lay-by close to the railway crossing – my first intended subject being the signal-box that stands beside the crossing. As I got there I though my luck was in as the alarm began to ring and the barriers descended indicating a train would shortly pass. I got my shot set up to feature the signal box at the right of the frame and the yet-to-arrive train on the left. Focus was nailed; composition was set; All I needed was the train to arrive. I waited. And waited. I noticed some curious looks from a lady in a car waiting at the crossing as she looked at the bloke staring into the top of the old-fashioned-looking camera. I waited some more and then, suddenly… the barriers raised. Bah! No train. It had not been my intention to shoot a passing train, but it would’ve been a nice addition to the picture had it arrived. Still, at least I got my shot (well, two of them actually) of the signal box. 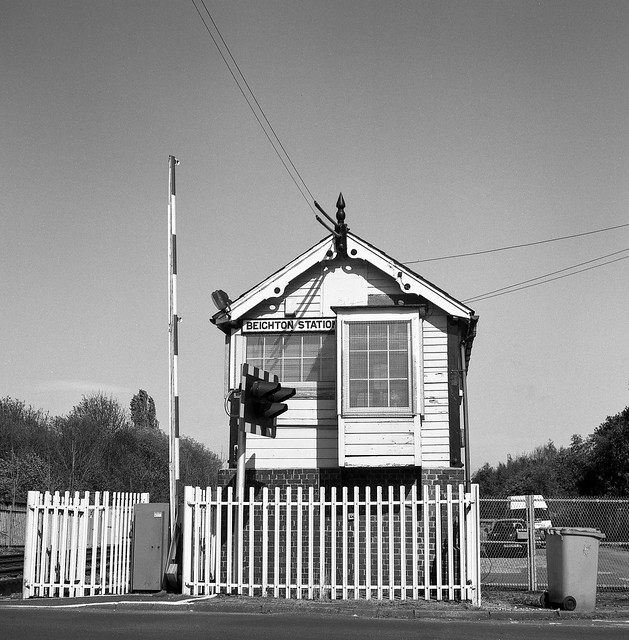 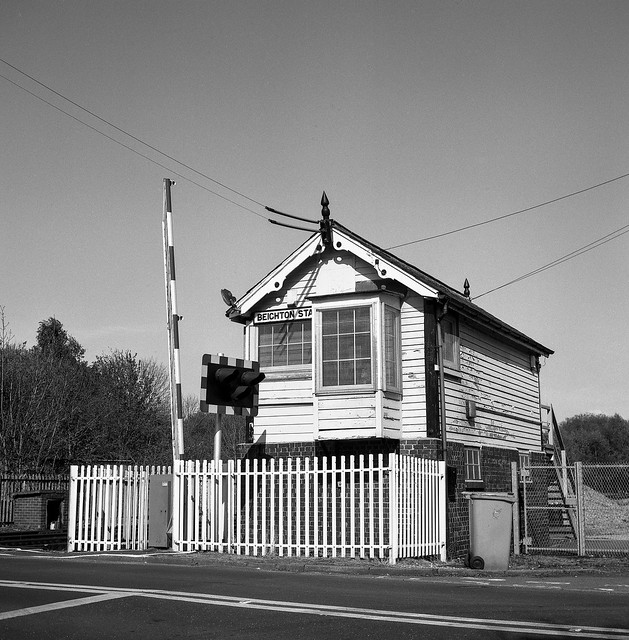 I then walked up the small road that runs parallel to the railway tracks. This leads to a scrapyard, although it’s not really a scrapyard in the traditional sense of it being a load of old junked cars anymore. It used to be, and I remember hunting for and finding a replacement wing-mirror for my first car at the very same place about twenty-five years previously, but these days it’s more of a recycled metals place and I don’t think there are any junked cars there any more. A pity, as they would make for interesting photo opportunities. Still, I took my next shot on the lane – there was a distant electricity pylon rising between a couple of trees where the road curved up ahead, and that made for frame #3. 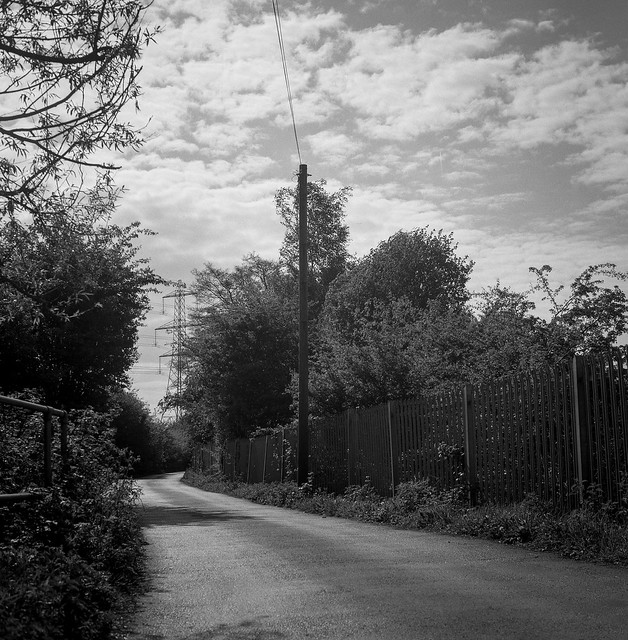 I’d intended the next shot to be of a footbridge spanning the railway lines, but there were a bunch of parked cars and vans next to the bridge that I felt spoiled the shot, so I instead turned my attention to the rows of waste-metal skips that are lined up outside the yard. I presume that these are dropped off from recycling depots and then returned later but, whatever the case, there a quite a number of them. I noticed three of the same design all in a row with some nice bright light on them, so that was shot #4. 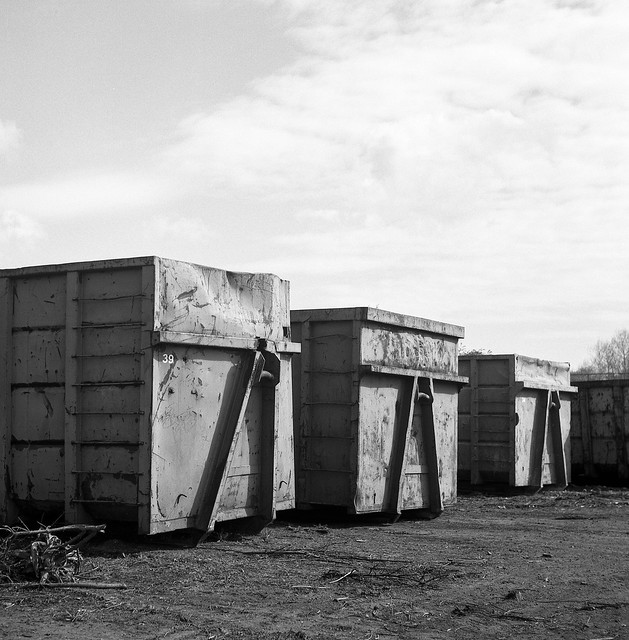 Shot #5 was of another footbridge, this one spanning a second set of railway lines (the two set join a little farther up the valley) and I attempted to get a shallow depth of field shot focussed on the foot of the steps. Alas, even with a roll of Ilford FP4+ in the camera, the light was too bright to drop below f/8 at the camera’s maximum shutter speed of 1/500 sec. The shot’s still quite nice (in an industrial style) though. 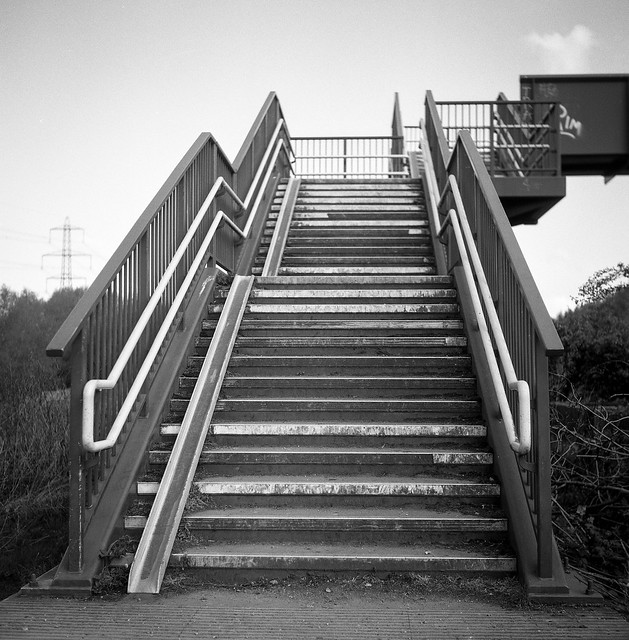 At the other side of the bridge, the path forks. Straight ahead takes you to the country park, to the left the path crosses the Rother via a narrow passage on the stone railway bridge. At the edge of the bridge I noticed a fence overgrown with brambles and nettles and decided to make it #6. The #7 was a wide aperture shot of the near-side of the path across the bridge and #8 was the same path from the opposite side. A bit of stray vegetation got into the shot here and spoils this one a little, although I’d be lying if I were to claim it would’ve been great otherwise. 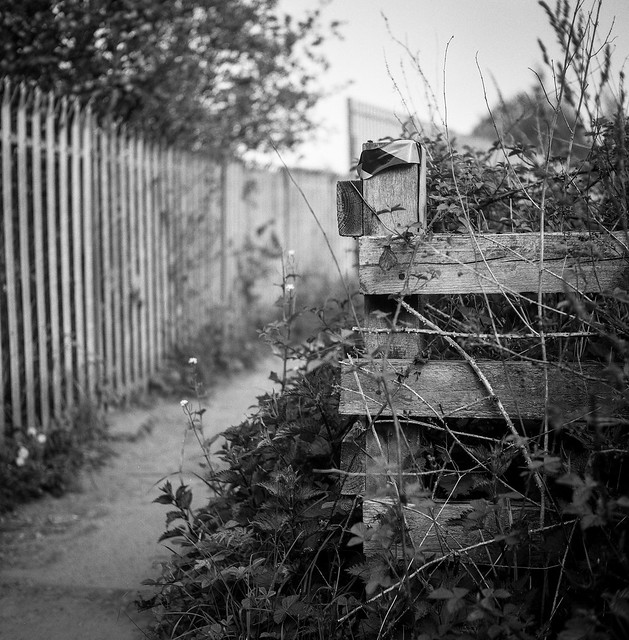 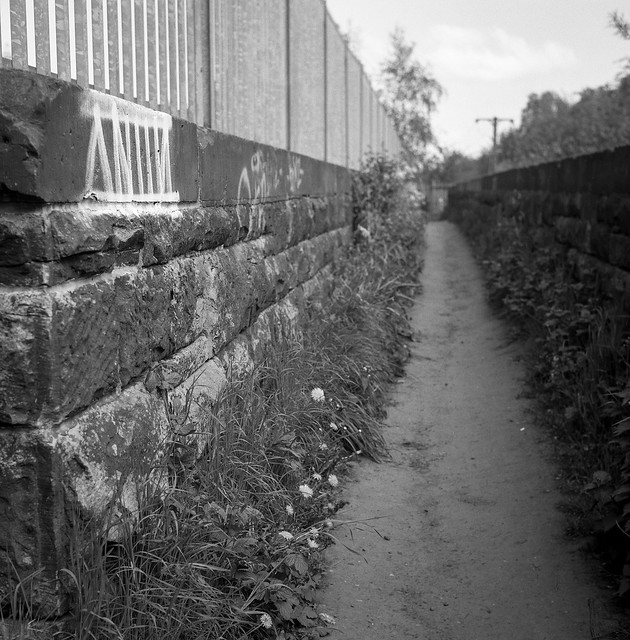 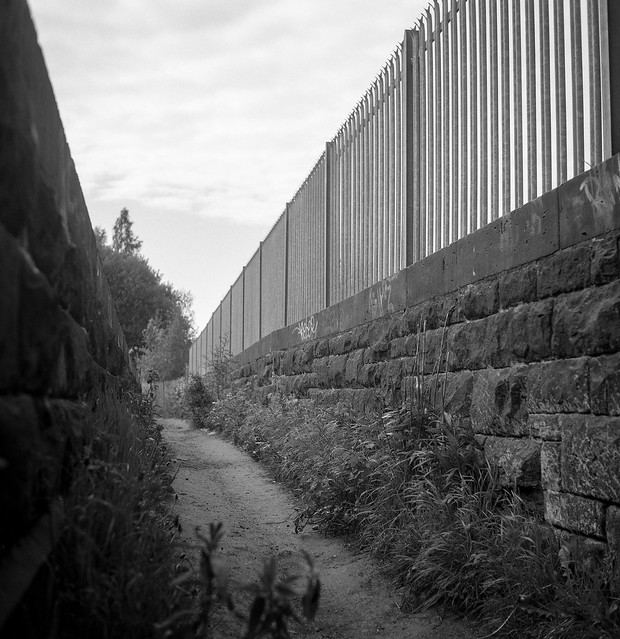 Shot #9 was of a cluster of directional signs poking from the undergrowth at the far side of the bridge. One of the signs looks to have had an encounter with fire at some point in its existence! Shots #10 & #11 were of the chain link fence the adjoins the right side of the path in my direction of travel – the other side is bordered by a more significant aluminium fence that separates the track from the set of railway lines. 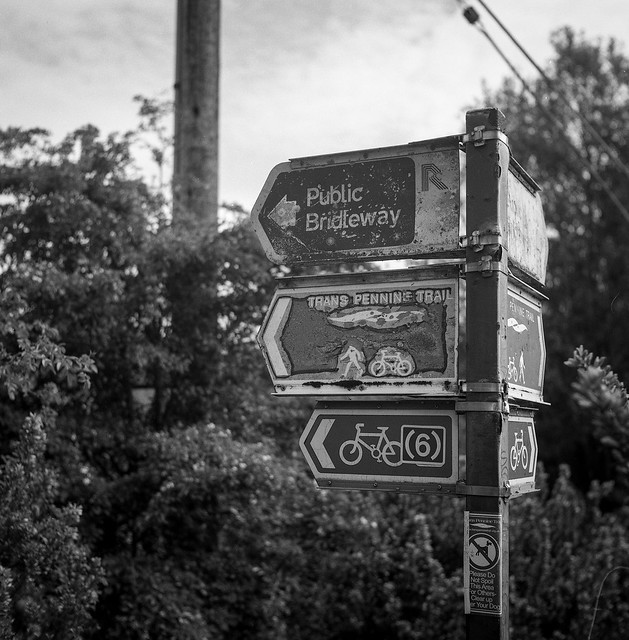 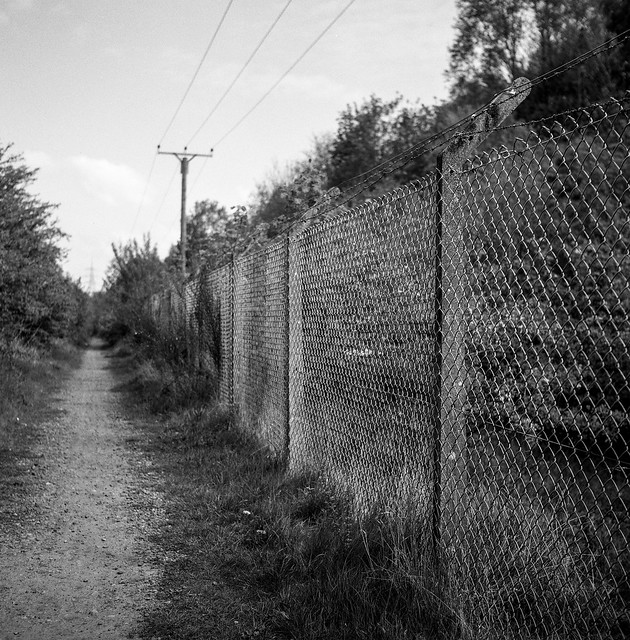 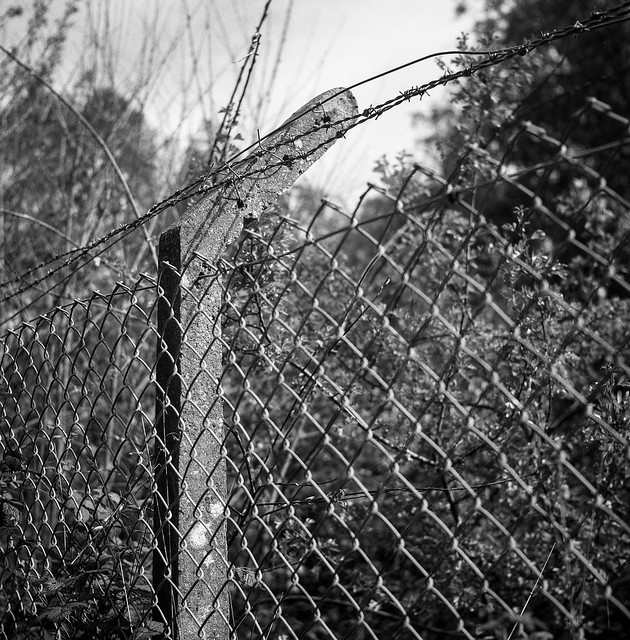 At the end of the path I walked up the small rise that leads to the viaduct carrying the A57 across the valley (including the river and both sets of railway lines), but took the road back down into the village before getting to the pedestrian-free zone, looping me back to my start point.

I had one final frame remaining of the twelve and decided that a wooden gate in a field close to where I’d parked the car would make a decent final shot. I think the gate was shot at f/8. 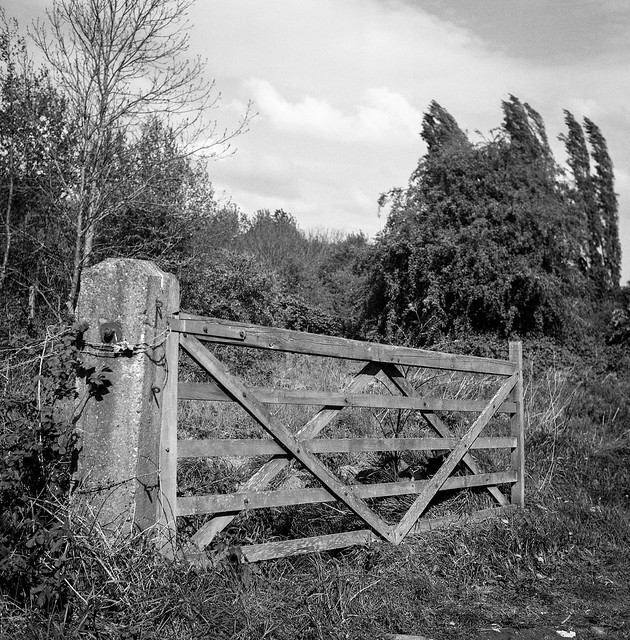 2 thoughts on “Twelve frames an hour”