After being pretty pleased with the first set of results from my Yashica Mat 124 G, I was eager to get out and shoot some more. Given I had an extra roll of HP5 lying around, what was there to wait for?

So, a couple of days after getting the first roll back, I went out again with another twelve potential masterpieces waiting to be found. I’m not sure there are any masterpieces amongst the shots I got  (well, I’m fairly confident there aren’t), but I was happy with the majority of them nontheless.

The first five shots were taken on an evening expedition after work on the 25th. After a bit of virtual-sightseeing on Google Streetview, I’d found a photogenic-looking tree on a country lane not too far from home, so I hopped in the car and drove to the location (not far from Harthill), The weather had consisted of sunshine and showers throughout the afternoon, and the situation had persisted into the early evening, so there were plenty of big clouds in the sky to add some interest to the shots, but with the downside that I would have to hide in the car should they decide to open up on my position (no surprises here, but they did).

The location was quite nice, and the showers had left a nice sheen of water on the lane running beside the tree. The fields on either side were full of oilseed rape in full bloom and were vivid with yellow flowers. Good job I had that black and white film in the camera, eh? I managed to get three shots before the rain came, and then waited in the car for a final shot after the shower had passed. The first shot was totally out of focus for no reason I could ascertain, but as the rest were fine, it’s probably attributable to camera shake or some other dumb user error.

I decided to drive on for the last shot of the evening, another lane just outside the pleasant little village of Thorpe Salvin. I’d seen the lane before, but not taken any shots, and while I quite like the result from this trip, the road was quite dry and I feel it might’ve benefited from a bit of water like the first location. There was also a pair of purple Calvin Klein underpants affixed to a barbed wire fence next to where I parked the car, but thankfully these were not in the way of my shot so I kept a safe distance from them. No idea what their particular story was!

A day later I decided to use the remaining 7 shots and took a drive past Eckington to the cluster of small hamlets in the hills beyond. I didn’t have any particular idea of what I was going to shoot, but felt that some opportunities might present themselves as I drove around.

The first shot was of a Give Way marker at a crossroads. Not the most obvious of subjects, but I’d seen a couple of examples of similar shots on The Online Darkroom blog that I liked the look of, and so decided to get my own take. I don’t think mine matches the quality of those taken by Bruce Robinson that it seeks to emulate, but it’s quite nice anyway and I was happy with the result.

The next shot was of a random piece of farm machinery I spotted in a field near Apperknowle (another shot that necessitated waiting out a rain shower in the car). Because of the TLR’s viewfinder and the proximity of a fence and foliage to my shooting position, I ended up cropping the shot to get rid of some distracting foreground objects that didn’t add anything to the shot. I’m not sure it’s great without them, but it has a pleasant vintage feel that I think can be a hallmark of medium format images.

The remaining shots were all taken at the same location in West Handley, where a traditional K6 red phone box stands beside the road. Behind the box was another rapeseed field, which made for a picture of the crop stems, and an anti-fracking notice on a telephone pole made for another.

Overall, I’m pleased with this second set from the camera. It’s still a learning experience, but one that’s a pleasure to undertake. Anyway, enough wittering, here are the shots:

The first two are of the tree near Harthill. 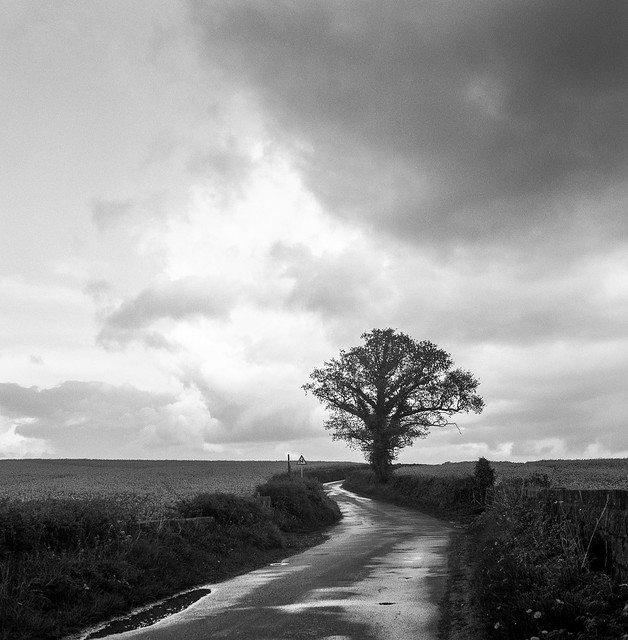 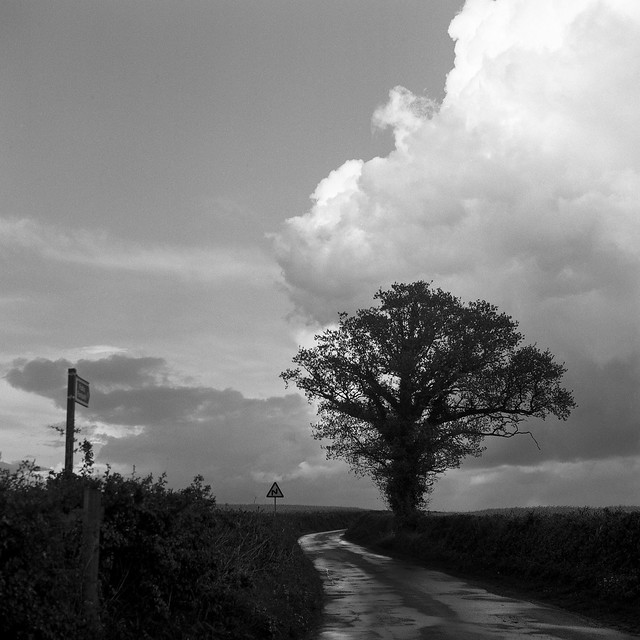 The next is the lane near Thorpe Salvin (and the underpants!). 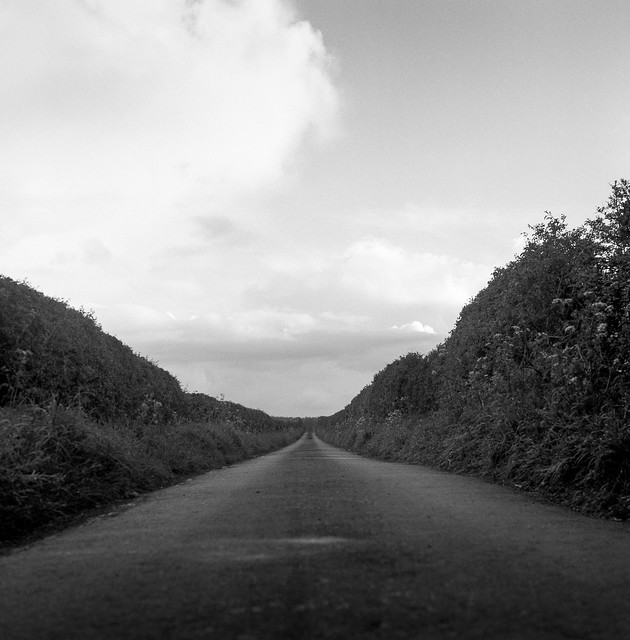 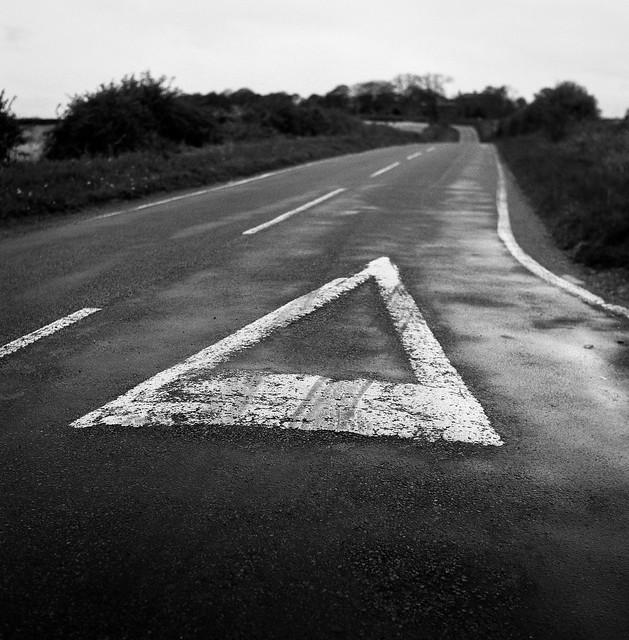 And the farm machinery (not sure what it is exactly though – possibly some sort of generator / pump?): 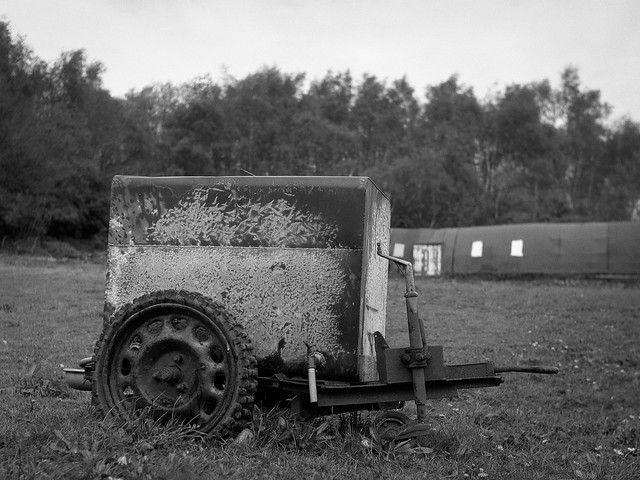 And finally, the shots from West Handley: 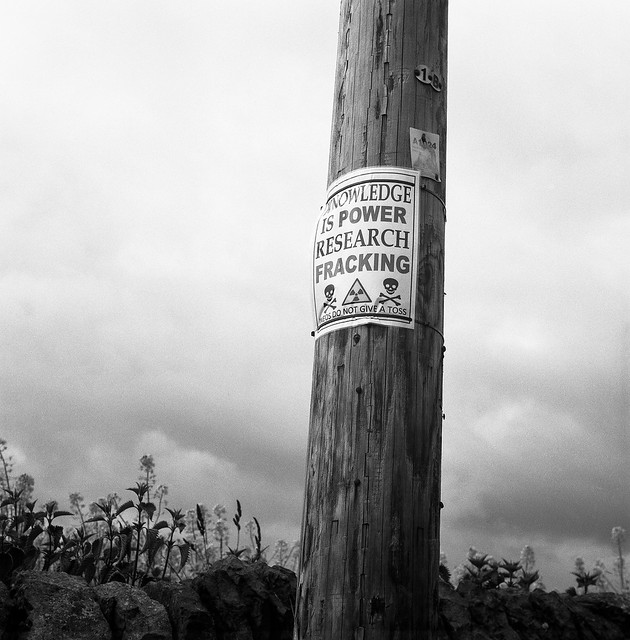 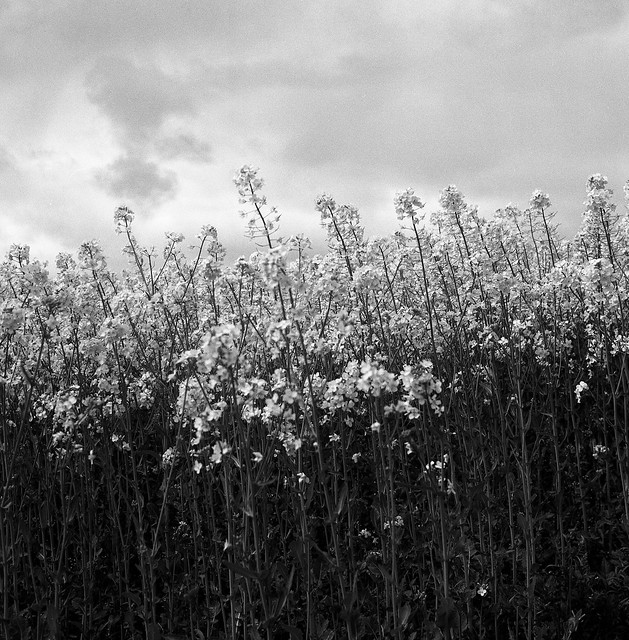 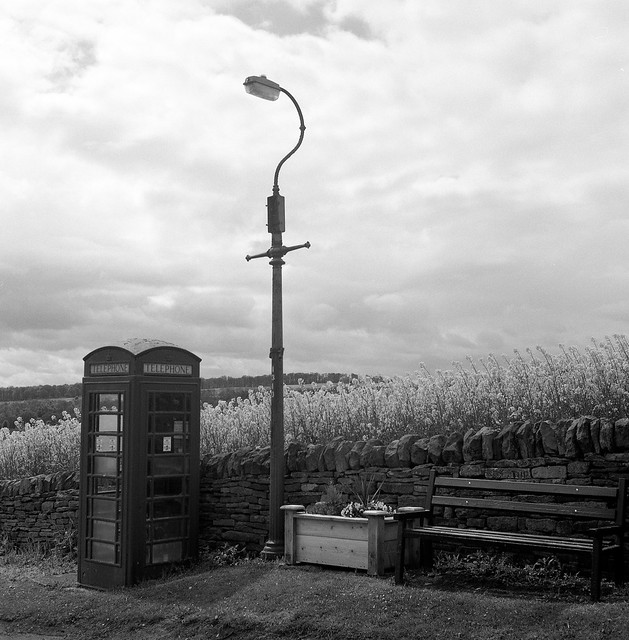 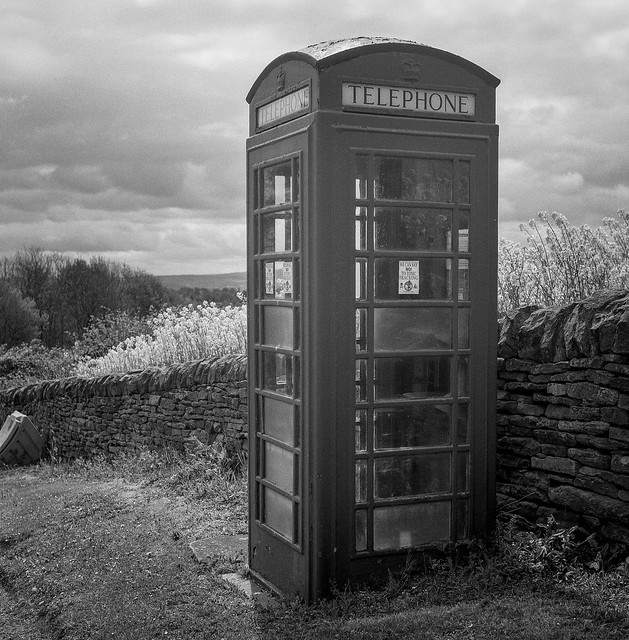 One thought on “Another couple of outings with the Yashica Mat”